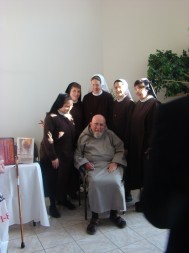 Father Benedict Groeschel, a priest of the Franciscan Friars of the Renewal, was the guest speaker at The Franciscan Center’s 20th anniversary celebration held Dec. 12 at the North Campus of the University of Saint Francis. He spoke of the importance for Catholic universities and colleges to be well-founded in Catholic doctrine. He poses with Sisters of St. Francis of Perpetual Adoration in this photo.

FORT WAYNE — Father Benedict Groeschel spoke at the North Campus of the University of Saint Francis (USF) on Dec. 12 as the Fort Wayne Franciscan Center celebrated its 20th anniversary with a reception and special program of recognition. A popular author, retreat master and activist, Father Groeschel is host of the television talk show “Sunday Night Live with Father Benedict Groeschel,” which is broadcast on the Eternal Word Television Network.

Father Groeschel expressed delight at being on the USF campus, a university that is known to be well-founded in Catholic doctrine. But the outspoken Franciscan priest noted in his remarks that not all colleges have remained true to the church.

He pointed out that we are emerging from a difficult period in the history of the Catholic Church. The decades of the 1960s, 1970s and 1980s saw much confusion among Catholics about matters of faith, he said, and many “sad examples” of the decline of the faith exist, especially in some so-called Catholic colleges around the nation. He railed against such institutions of higher learning, especially those which appear to support pro-abortion forces.

He pulled no punches with his audience, telling parents to do their research before sending their child to college. “Be very careful when you pay money to send someone to a Catholic college,” he warned. He spoke of being on a secular college campus in California and seeing 500 students in attendance at Mass. That was better, in his mind, than what he’s witnessed on some “phony Catholic” campuses.

However, Father Groeschel takes consolation in the fact that he’s seeing a huge resurgence in Catholic studies today among ordinary, devout people. He believes that we are at the “edge of a new era in the Catholic Church in the U.S.”

Young men and women are more dedicated to their faith and much more interested in traditional Catholic teaching than ever. “It’s about time,” he said.

Jim Christie, executive director of The Franciscan Center, opened the dedication portion of the event by recalling the center’s modest beginnings as a homeless shelter on Pontiac Street. At that time, founder Sally Ley, a Secular Franciscan and cofounder, and the late Jean Kelly, prepared and served sandwiches to those in need on a daily basis. A short historical video was shown, which revealed the 20-year time span over which more than one million people have been served.

Ley was in attendance to receive Christie’s congratulations for a job well done. “It’s about sharing Christ’s love,” Christie said in acknowledgment of Ley’s service to the center.

Today, The Franciscan Center is located at 4643 Gaywood Dr., Fort Wayne, in the former Sacred Heart School building. Programs run out of the center include St. Peter’s Sack Lunch Program, which feeds more than 1,100 weekly; St. Anthony’s Food Pantry, which serves more than 200 weekly; and St. Joseph’s Medicine Cabinet where nursing students from USF check blood pressures and 125 people receive medicine each week. The homeless shelter was turned over to Vincent House 10 years ago.

Father Groeschel can empathize with the work of the Franciscan Center. He and seven Capuchin priest colleagues left their order in 1987 to begin the Franciscan Friars of the Renewal with the mission of preaching reform and serving the poor.

His appearance and address are the culmination of a busy time for the Franciscan Center. Other events commemorating the 20th anniversary year were a Hunger Walk, a dinner auction and Turkey Tuesday in November.

Father Groeschel ended his remarks on a high note. “Have hope,” he said.