With joy and thanksgiving, the Congregation of Holy Cross celebrated the final profession of vows of four men in formation on Saturday, Aug. 27, at the Basilica of the Sacred Heart at Notre Dame.

Deacon Fritz, and Deacon Gutierrez, were ordained to the Order of the Deacon on Sunday, Aug. 28, in the Moreau Seminary Chapel by Bishop William A. Wack, CSC. 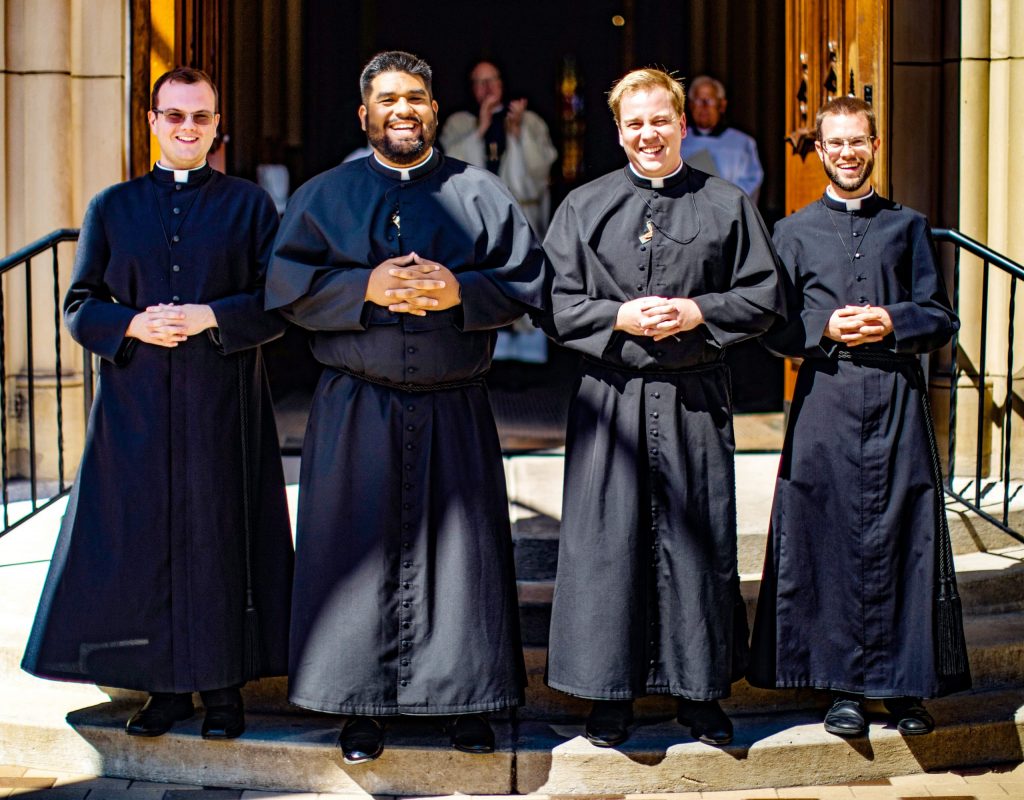 Provided by Julie Clark
The Congregation of Holy Cross celebrate the profession of vows of two brothers and the ordination of two deacons on Saturday, Aug. 27, at the Basilica of the Sacred Heart at Notre Dame. From left are Brother James Walters, CSC, Deacon John Sebastian Gutierrez, CSC, Brother James Henke, CSC, and Deacon Andrew Fritz, CSC.

According to the Constitutions of the Congregation of Holy Cross, the four men profess perpetual vows of chastity, poverty, and obedience. For the past several years, they have been in a period of temporary vows, which they renewed annually. On Aug. 27, they committed their lives and work to the communal life and ministry of Holy Cross.

Deacon Fritz was born in Columbia, Maryland, the second of four children of David and Peggy Fritz. His home parish is St. Louis Catholic Church in Clarksville, Maryland. He enrolled at the University of Notre Dame in 2012 and began his formation with Holy Cross that same year as a member of the Old College Undergraduate Seminary. During his time in Old College, he earned Bachelor of Arts degrees in Anthropology and Philosophy. He earned his Master of Divinity from Notre Dame in 2021.

While in Old College, Fritz visited priests at Holy Cross House; taught second-, third-, and fourth-grade religious education at two parishes in South Bend; and served the poor and homeless with organizations including Catholic Workerâ€™s Our Lady of the Road in South Bend. He taught marriage preparation for couples at St. Pius X Parish in Granger from 2019-2020. He will continue serving as a deacon at St. John Vianney Parish in Goodyear, Arizona.

Deacon Gutierrez, born in San Antonio, is the oldest of two children of Patricia Sanchez. His home parish is Prince of Peace Catholic Church in San Antonio. He attended the University of the Incarnate Word in San Antonio, earning a degree in Communication Arts with a concentration in Production in 2015. He received his Master of Divinity from Notre Dame in 2022.

Gutierrez began his formation ministry as a volunteer at DujariĂ© House and Quinn Memory Center at Holy Cross Village and served as a mission team leader for Holy Cross Collegeâ€™s Campus Ministry from 2015-2016. He spent 2019-2020 teaching online theology courses in Spanish for the Camino Program at Notre Dameâ€™s McGrath Institute for Church Life. From 2020-2021, he worked with Notre Dame Campus Ministryâ€™s Multicultural Ministry. Most recently, he served as Assistant Hall Director at Holy Cross College. Following his final vows, Gutierrez will spend his diaconate year assigned to St. Ignatius Martyr Catholic Church in Austin, Texas.

Born in Indianapolis, Brother Henke is the oldest of three children of Robert and Ellen Henke. Our Lady of the Greenwood Catholic Church in Greenwood, Indiana, is his home parish. He enrolled at Notre Dame in 2012 and began his formation with Holy Cross by joining Old College in 2014. He graduated in 2016 after earning a Bachelor of Arts in Philosophy/Theology. He received his Master of Divinity from Notre Dame in 2021.

Brother Henkeâ€™s first ministry placement was as a CCD catechist at St. Joseph Parish in South Bend from 2014-2015, followed by a year working with Hope Ministries in South Bend. He spent the summer of 2016 at Holy Redeemer Parish in Portland, Oregon, then spent 2016-2017 assisting Notre Dameâ€™s Campus Ministry with Bible studies and volunteering at AndrĂ© House in Phoenix. During the summer of 2020, Henke was a teaching assistant serving high schoolers who attended the Vocations Officeâ€™s Summer Seminary Immersion Program (SSIP) at Notre Dame. He then served as the Club President of Notre Dameâ€™s Catholic Peace Fellowship (2020-2021). Following final vows, Henke begins his apostolate as a brother working with Kingâ€™s Collegeâ€™s Campus Ministry. He is also a volunteer at the Shoval Center, the collegeâ€™s service-engagement center.

Brother Walters was born in Bellefontaine, Ohio, as the only child of Rodney and Lisa Walters. His home parish is Holy Angels in Sidney, Ohio. He earned his Bachelorâ€™s in Theology from Holy Cross College from 2013-2017 and began his formation with Holy Cross as a member of Old College in 2014. He earned his Master of Divinity degree from the University of Notre Dame in 2021.

During Brother Waltersâ€™ time in Old College, he served as a catechist at Notre Dameâ€™s Sacred Heart Parish from 2014-2015, interned at the Logan Center in South Bend in 2015, and wrapped up that year teaching English at St. Josephâ€™s Hill Secondary School in Kyarusozi, Uganda. During 2016, he volunteered at St. Patrickâ€™s Parish in London, UK, served as an RCIC instructor, ministered to the homebound at Christ the King Parish in South Bend, and interned at Holy Redeemer Parish in Portland, Oregon. Brother Walters worked as a chaplain intern at Elkhart General Hospital in Elkhart. He served as Sacristan Coordinator at Notre Dameâ€™s Basilica of the Sacred Heart from 2020-2021. He will continue to serve as Campus Minister for Retreats and Faith Formation at Stonehill College.