The sign in the office at St. Joseph School in Fort Wayne says it all: “It’s good to be home.”

Most students, teachers and staff had to stay out of the school building for nearly nine months as workers repaired damage caused Nov. 12 by an electrical problem in the hallway ceiling of the school’s upper, academic floor.

Bishop Kevin C. Rhoades blessed the restored school Sept. 17 after celebrating Mass at the parish with students, staff and parishioners. The school serves 198 children in prekindergarten through grade 8. 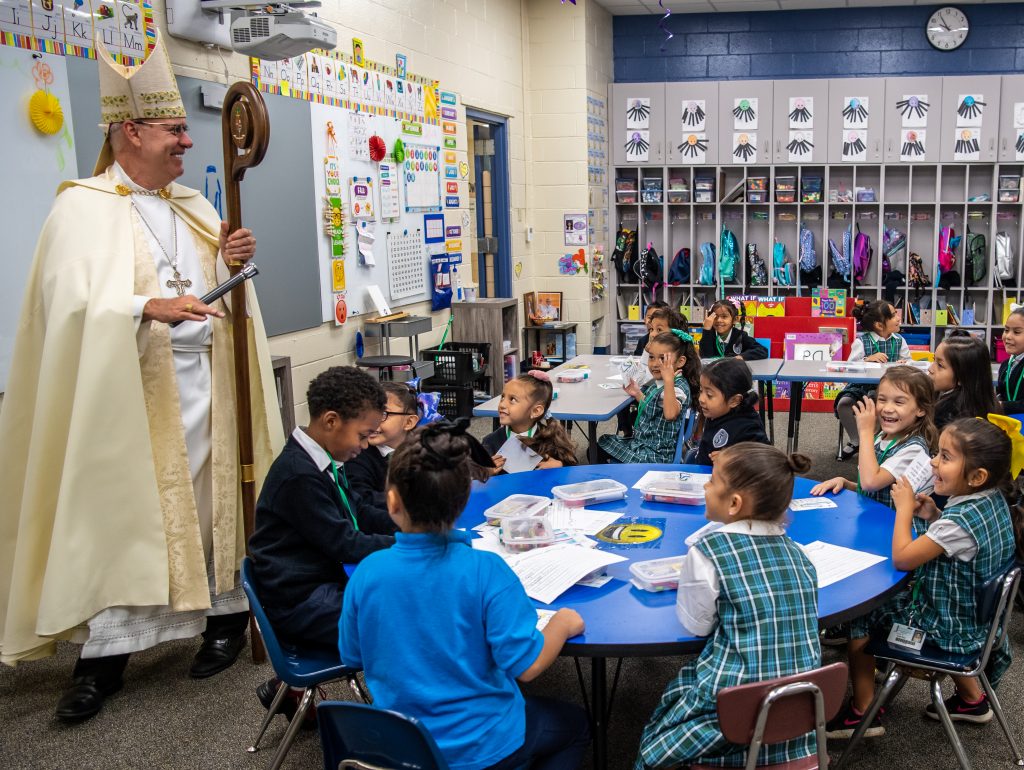 Joining Bishop Rhoades in celebrating the Mass and touring the school were Father Evaristo Olivera, St. Joseph pastor, and Father José Arroyo Acevedo, who served for a year as a deacon at the parish before being ordained a priest this summer. Father Arroyo now serves as a parochial vicar at St. John the Evangelist Parish in Goshen.

“The mission statement of St. Joseph Parish is, ‘We are the body of Christ,’ and I saw that,” principal Cristy Jordán said of the help and encouragement the school received. “It is alive and well here.”

The electrical problem, which was discovered at night, resulted in smoke and water damage to most classrooms, Jordán said. Firefighters also had to poke holes in a large section of the school roof as they searched for the source of the smoke.

The diocese’s policy with Catholic Mutual Group insurance paid for repairs and for restoring the classrooms with the technology available now, Jordán said.

During the Mass, Bishop Rhoades focused the first part of his homily on St. Robert Bellarmine, whose feast the Catholic Church observed that day.

“I pray especially today for your teachers, because St. Robert was a teacher,” said the bishop. He walked down from the sanctuary to stand among the pews where students sat. “Do you know what makes St. Joseph School such a good school?” he asked. Your teachers!”

He also spoke about the day’s Gospel reading, Luke 7:11-17. The passage tells of Jesus raising from the dead a young man who was the son of a widow.

After seeing the suffering and sadness of the widow, Jesus stopped and raised her son from the dead.

“That’s how much Jesus loves those who are hurting,” the bishop added.

“Life doesn’t end with death,” he noted. “Jesus gives us the gift of eternal life.”

After Mass, the bishop first blessed the school from an outdoor courtyard that lies between the church and school. Students, school staff and parishioners stood around him in a large semicircle as a light drizzle fell.

He then went from classroom to classroom in the school, where he sprinkled holy water and blessed the rooms and the students and teachers in them.

Later, with all students sitting in the academic hallway, the bishop blessed a crucifix before its return to a place on the wall of the hallway. He also blessed all of the students, school staff and parishioners in the hallway. 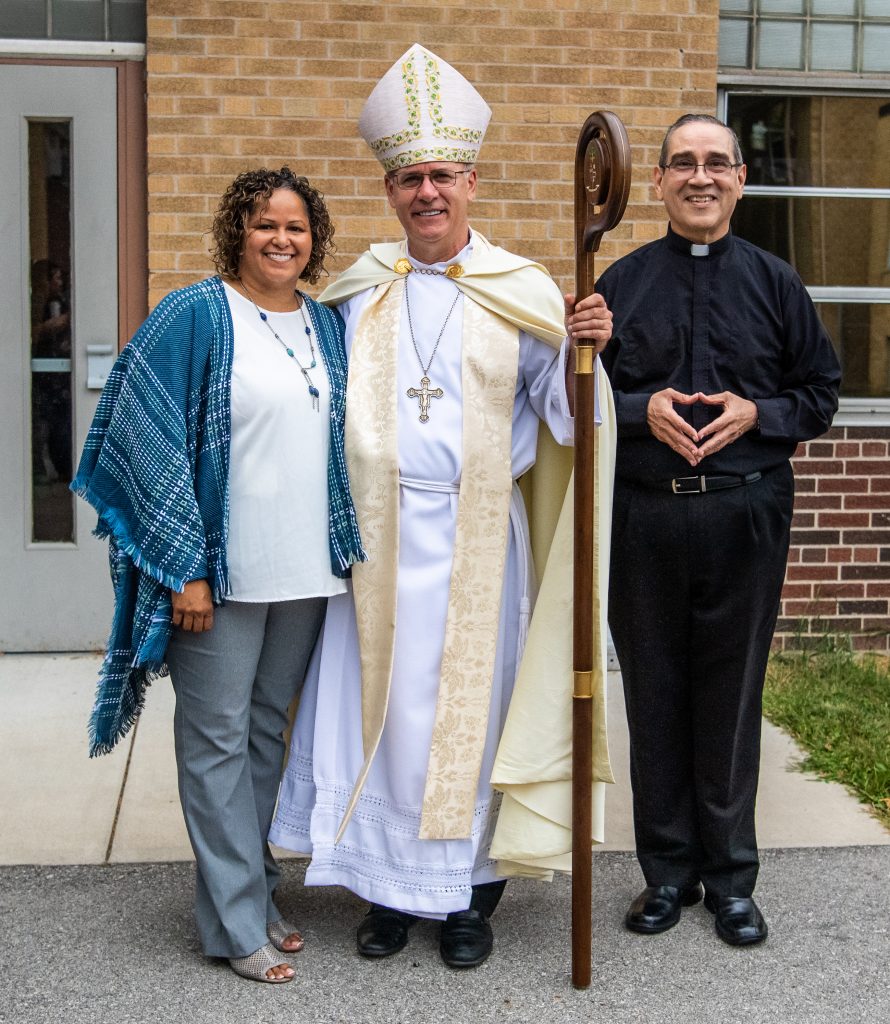 Jordán said many people contributed to the school’s being able to carry on successfully after vacating the building during repairs.

The morning after the incident, she called principal Jim Huth of Bishop Luers High School to ask if her students could use the former Saint Anne Communities retirement center that now is part of the Luers campus. Huth said yes, and St. Joseph students in grades 4-8 began holding their classes at the Luers West campus.

“They kind of really embraced us as little brothers and sisters across the street from them,” Jordán said.

In January, St. Joseph had to bring the fourth graders and fifth graders back to the parish campus because of a water problem in the former Saint Anne building. The prekindergarten was able to return to its regular classroom after about two weeks of work, Jordán said, and other grades had to meet in a main-floor room at the church and in the church basement during the restoration and repairs.

Jordán expressed appreciation for parish members being so understanding about the school’s use of the space. School parents and parishioners also helped in other ways.

Many classroom materials and items had been in storage during the work on the school, Jordán said, and in early August, movers delivered stored items to the school gym but didn’t plan to move them from the gym to classrooms. Pastor Olivera made a request for help at Mass and Jordán began calling school parents to ask them to assist. On the scheduled date, parents and parishioners moved all of the items from the gym to classrooms in 90 minutes.