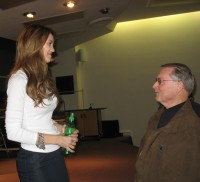 Speaker Leah Darrow answers a question following a talk on “From Top Model to Role Model.”

Darrow drew upon her experiences in fashion, reality TV and the moments during and after her re-conversion to Catholicism, emphasizing the call to greatness within everyone in a talk titled, “From Top Model to Role Model.”

“I didn’t always have a ‘halo,’” she quipped. “And I didn’t grow ‘horns’ overnight either,” she added.

The oldest of six children, Darrow was born in Oklahoma, raised Catholic and “loved it.” Even though she recited the rosary nightly with her family, Darrow thought, “I’m a good person. But I’ll be holy later, when I’m older,” especially after the family moved to St. Louis and she strove to “fit in” in a new high school by “going along with the group.”

“I’m embarrassed to admit I lost my virginity at age 15,” she said choking back tears. “I didn’t know how good I was. It was a precious gift to give away,” she stressed. “Now I was damaged goods. That one moment changed everything for me; so I kept doing it, lowering my self esteem even further … in a 10-year fade from everything I knew.”

“We should not be entertainment for others,” Darrow emphasized as she described the many humiliating circumstances of working in reality TV, and the fashion and beauty industries. “They tell us (models) they have to film everything. We’re asked to reveal our imperfections, break ourselves down so they can build us up with their products,” she added.

“But everything suddenly came together in the middle of a photo shoot,” she said. Darrow described how she saw herself with empty hands looking up at a shadowy profile of a man who seemed to bow his head because she had nothing — no gifts — to offer.

“I vowed right then to quit sin — and walked out!” The crew yelled, “You’re gonna be a nobody!” She added, “Do you promise I’ll be a nobody!” thinking “I had made Jesus and my faith a nobody for years!”

Darrow called her dad, Patrick, and said, “If you don’t come and get me I’m going to lose my soul!”

He drove from St. Louis to New York, but she said she had no idea how she was going to change. But since she wanted to come home, the first thing her dad had her do was go to Confession, “because the Church is home,” he said.

There was quiet laughter throughout the USF audience as Darrow described the experience of unloading everything to a very understanding priest in the confessional.

“I can still feel that peace,” she stressed. “It’s over!” She now realizes the hurt and worry she put her parents through, as well as the things her brothers and sisters did because of her example.

Darrow began “rehabilitating herself” by attending Mass, Adoration of the Blessed Sacrament, engaging in spiritual reading and even dating, emphasizing her clothes “stayed on!” And she assumed a full-time position with Catholic Answers in El Cajon, Calif.., one of the largest lay-run apostolates of Catholic apologetics and evangelization in the United States.

“I have to share my story,” bringing her experiences of the fashion world and Catholicism to others through talks and Catholic Answers. Darrow has appeared on numerous secular and non-secular television and radio programs, including EWTN, and spoken on behalf of international youth at the United Nations’ panel discussion in July 2011. She addresses the topics of mercy, conversion, human dignity, modesty and chastity, and inspires and challenges people of all ages to accept the mercy of Christ, embrace true love and welcome conversion.

About a month ago she accepted a marriage proposal at sunrise on the rim of the Grand Canyon from Rick, who said he forgives her past and wants to share his love with her forever.

Darrow said in conclusion, “There’s one Man who gave us His Forever Love on a Cross. We’re all being proposed to by Christ. Will we say ‘yes’ to His proposal?”