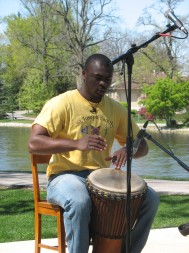 Professional Drummer Bill Nathan of Haiti performs prior to his remarks April 12 at the amphitheater outside the Pope John Paul II Center on the University of Saint Francis campus. Nathan, 25, performs at churches and universities in the United States to raise awareness of the needs in Haiti.

FORT WAYNE — The University of Saint Francis and its Formula for Life fundraising event brought professional drummer and former Haitian slave child Bill Nathan to campus on April 12. He performed and told his story of becoming a musician while in slavery for a year as an orphaned child.

His father died two months after Nathan’s birth. His mother moved to Hinche, a small town on the St. Joseph Plateau, to find work to support both Nathan and his older sister, Shela. After living in the streets, they were directed to a community of Catholic Sisters and met Sister Caroline, head of the congregation, who found them a house and some furniture. To pay back their generosity, Nathan’s mother worked in the garden and did chores for the sisters. Eventually, she found a job cooking, cleaning and ironing to pay the rent and schooling of her children.

One night Nathan’s mother cried out that she was dying, even though she had not been sick. And while the three of them held hands, praying and singing, she died, leaving the children alone with no family or support.

Fortunately, a neighbor told the sisters what happened. Sister Caroline arranged for the funeral and took in the children for a couple weeks while searching for a foster family. Two families agreed to take the children, but separately.

“Sister Caroline made it very clear,” Nathan said, “that we were not to be treated as a ‘restavek,’ a French word meaning ‘slave child.’”

Even though both families initially agreed to treat them as their own children, “everything changed,” he emphasized. Nathan was kicked out of the house at age 7 and made to sleep on a piece of cardboard in a summer kitchen. He was not allowed to attend school or play with the children. His only job was “to stay at the house and work.”

Nathan could not eat at the same table as the family. “I was permitted the scraps from the plates if I did all my chores! Not only that,” he added, “for no reason I would get beat up with a whip made of cowhide.”

Nathan’s main job was to get water for the family, filling a five-gallon bucket after walking miles to the water fountain. While he waited for water, he began drumming on the bottom of the bucket. “Oh Bill, you’re a good drummer!” many exclaimed. Encouraged by their support, he was last to fill his bucket and “late” getting back to the family. “That meant another beating,” he said, pointing to scars on his arm.

“I knew one day God would get me out of that situation,” Nathan related. And at age 8, his mistreatment drew the attention of Sister Caroline. He was rescued from the house and sent to St. Joseph’s Home for Boys in Port-au-Prince where he lived in a family atmosphere with his own room and bed, eating together with orphans like himself.

“I returned to my schooling where I achieved what I wanted to be,” he said. At age 21, Nathan became St. Joseph’s director.

“St. Joseph is not only a place for kids who come from the street and have been in a ‘restavek’ situation,” Nathan related, “but it’s also a guest house. That’s how we generate income to support our home.”

They also ran Wings of Hope, a facility for more than 50 physically- and mentally-handicapped children. In Haiti, many see these children as manifestations of evil and are rejected by society, explained Nathan. “Nobody wants to be involved,” he added. “They are like living pieces of furniture!”

On Jan. 12, 2010 — at eight minutes to five in the afternoon — everything changed when a massive earthquake struck Haiti. Both buildings were lost.

“The miracle thing is that none of our kids died,” Nathan exclaimed.

On that day, he was on the roof of the seven-story St. Joseph’s building, urging children playing up there to go downstairs, finish their chores and come to chapel. Nathan was alone on the roof when he felt the building and ground begin to shake. As he held tightly to a railing, he prayed, “God, my life is in Your hands!” He fell 75 feet into a garden. An oak tree kept the building from falling directly upon him. Eventually, Nathan was airlifted to the United States where he spent three months recovering from broken ribs, cracked vertebrae and other internal injuries.

Upon his return to Haiti, he discovered “not much had been done,” because machinery was too expensive to bring in. Nathan suggested that his “best friend” — the five-gallon bucket — be purchased to start collecting the rubble. “We took the rest of the building down, bucket by bucket,” he said.

“It took us nine months, but we did it; now, a year later, we’re about to finish rebuilding our home. “This building is a sign of hope, so we painted it with many beautiful colors, like the sunrise. We put butterflies on it because it’s a sign of resurrection!”

“Please, come to Haiti,” Nathan urged the listeners. “We are people full of joy who open their arms, welcoming people in. Our kids will love to take your hand and lead you to enjoy the ocean. It’s a beautiful country with beautiful people. Haitians are resilient! In Haiti we do the best we can with what we have,” he concluded.

The tragic story of Nathan’s life of abuse has been chronicled in the book, “A Crime so Monstrous: Face to Face with Modern Day Slavery.”