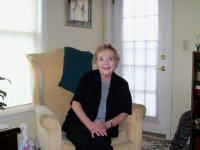 Mary Thul relaxes in her Goshen home in between serving the parish in many ways, including being instrumental in starting the mentoring program at St. John the Evangelist School.

GOSHEN — She may be past retirement age but when it comes to working and serving her parish, Mary Thul of St. John the Evangelist Church in Goshen is still very actively involved.

Over the years Mary has been involved in a variety of things at the church. Currently she serves as an extraordinary minister of the Eucharist and minister to homebound, helps with RCIA, is an active member of the newly-revived Altar Rosary Society, plans funeral dinners and is a mentor as well as coordinator of the mentors at St. John the Evangelist School.

She also served on the parish council for many years off and on, and when her children were young, she was very active serving in various capacities at the school. She said she worked with the Kids Care, a lunchtime program, and also did playground monitor duty. One year she was a substitute teacher.

Thul said she and her husband Tom and children moved to Goshen in 1969 when Tom’s job in marine sales brought him to the area. The couple has three children — son Kelly, daughter Mary Kay Longacre and son Tim. They have four granddaughters and four grandsons from their three children.

Daughter Mary Kay lives in Goshen with her husband Dan and their two daughters (now in college) and a son (now at Goshen High School). They all attended St. John the Evangelist School as well.

“So I truly have a heart for the school,” Mary said.

The Thul sons both live in Bloomington, Ill., with their respective families. When the Thuls first moved to Goshen, Father James Cis was pastor. Mary was on the parish council when Father Paul Bueter was pastor. Sometime between Father Lawrence Tippmann’s time as pastor and Father Ed Krason, Mary was off the council and served on a committee. When Father John Delaney came she was back on the parish council and shortly after current pastor, Father Christopher Smith came she stepped back.

“The parish council needs to change from time to time,” she said, “get new members, fresh ideas, and I felt it was time to step back from that and let younger people take over.”

She said when they first moved to the area, “In the ‘60’s St. John’s was the social hub of Catholics in Goshen. Many lived within walking distance.”

The Thuls lived a little further away in an all-Mennonite neighborhood nearer the college and Mary laughed as she recalled how she was told the neighbors had a meeting to discuss how to handle having a Catholic family in the neighborhood. Over the years as friendships with the neighbors grew they were able to dispel a lot of misconceptions about Catholics.

Mary has helped with the RCIA program for about six years. Jim Leatherman is the director. Because driving at night is more challenging for her these days now she simply goes in each week to set up the food and make coffee, then she leaves.

She said she is probably proudest of her involvement in the mentoring program at St. John’s school. In 1999 Mike Ronzone was the school principal and he came up with idea that a mentoring program might be good for the school. Mary became the coordinator. She said the mentors were primarily grandparents, but not all the volunteers are grandparents.

Mentors volunteer one hour a week to assist teachers by working one-on-one or in small groups with the students.

“It wouldn’t work without the cooperation of the principal and the teachers,” she said. “That’s one of the gifts of a small school — everyone coming together for one common cause — the children.”

However, she said now that she is doing the homebound ministry, “It’s a tie between that and mentoring (for her favorite ministry). It is so gratifying. They cannot thank you enough. You have no idea what it means to them to have Christ brought to them and to be the instrument of that is such a feeling of joy,” Mary said. She pointed out that her two favorite ministries are “on opposite ends of the life cycle.”

She said the biggest changes over the years at St. John’s have been the blending of the Hispanic community. “It’s a challenge for both groups but I’m also seeing it developing into a very good relationship,” she said.

When asked if she was excited about the revival of the Altar Rosary Society, a direct result of the Christ Renews His Parish (CRHP) retreats at St. John’s, she said she was, but acknowledges it will be different than it was in earlier years because of the increased demands on younger women.

To those who are not involved in their parishes she’d ask, “What have you got to lose by giving it a try?”

There are so many things she loves about St. John’s but mainly, “I feel at home — not only religiously at home but personally at home. I have friends of all ages — children that my children grew up with are now grown and have children. It’s family. And because it’s family there may be times when we don’t always all get along but that’s part of family.”

She’s most excited by the renewed dedication to the church and faith she’s seeing in young people in the parish.

“As I sit in church or at the school the hope I get from the younger generation — the devotion to their faith. There are so many young people so active that is so good to see — for a while it was not that way. There’s a vibrancy to the parish,” Mary said.

“I’ve been very blessed and it’s been a great joy to work with a lot of good people and being part of a group.”

Mary shared a favorite quote that she’s passed on to her grandchildren, “Life is not about waiting for the storms to pass; it’s about learning to dance in the rain.”