In the Gospel of Luke, when John the Baptist sent messengers to ask Jesus if He was the long-awaited Messiah, Jesus pointed to works of healing He had performed — curing the blind, the lame and deaf — and instructed them to give this testimony.

The healings performed by Jesus and, in His name, by the Apostles, document Jesus’ compassion for people with disabilities. Still today, the disciples of Christ are called to the same compassion and to try to meet the physical and spiritual needs of their brothers and sisters with physical and mental limitations.

In recent years, St. John the Baptist Parish in Fort Wayne has made strides to ensure that all feel a sense of belonging in the Church.

To pastor Father Andrew Budzinski, “belonging” means that his parishioners, including those with disabilities, “see themselves as valued members of the family in this portion of the vineyard (that) God calls St. John the Baptist.” 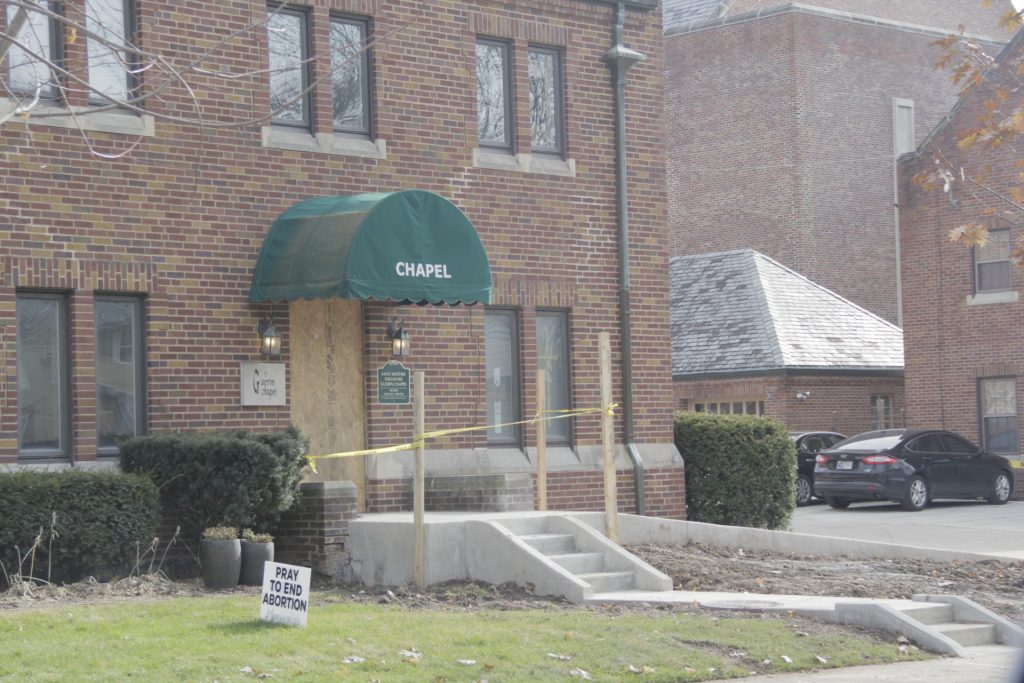 Photos by Jennifer Barton
A new wheelchair ramp for the Mother Theodore Guerin Adoration Chapel at St. John the Baptist Parish, Fort Wayne, will be open for use soon. A parish survey illuminated the need for the ramp.

Disabilities can take many different forms and meeting various accessibility needs can be challenging. But through a collaboration with the Diocesan Ministry with Persons with Disabilities, St. John has set about tackling several of these needs in the past several years.

Some accommodations were relatively small. For lector Christopher Hickey, who uses a wheelchair due to multiple sclerosis, it was a simple matter to provide him a handheld microphone so he could lector from the front of the worship area.

Clinger feels “humbled and honored to contribute as a member … and I will continue to work until God calls me home.” 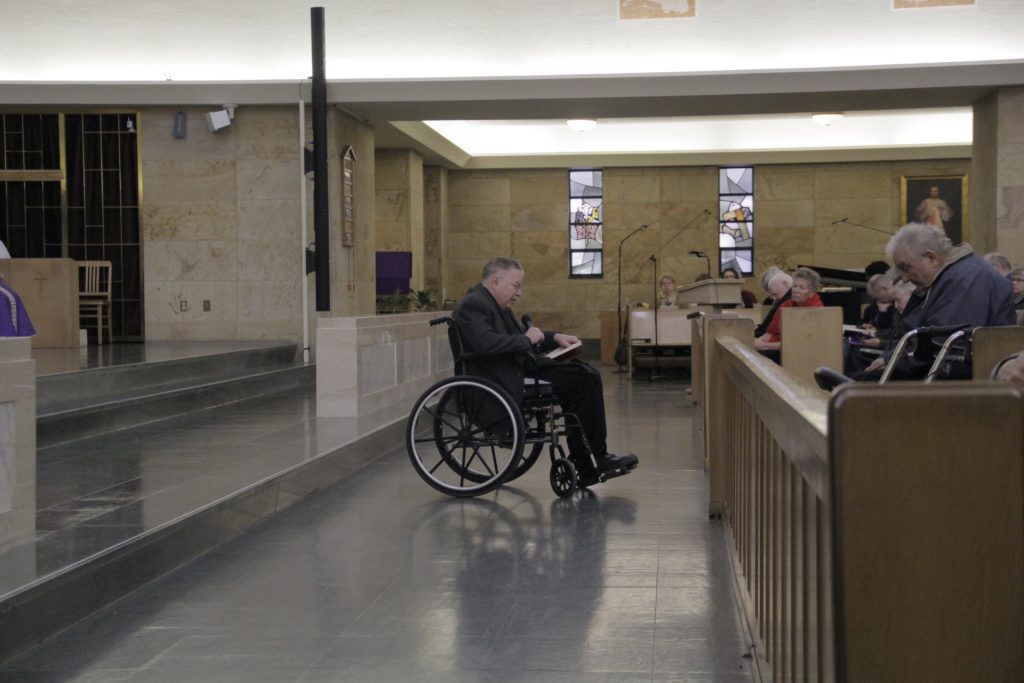 Hickey had additional mobility issues getting from his car to the church. He uses a power chair, so bumps in the sidewalk were ground down and new sidewalks were placed where needed. There was also a distinct lack of accessible parking spaces near the church. Fellow parishioner Allison Sturm, who works in Ministry with Persons With Disabilities for the diocese, researched city of Fort Wayne policies and attained signage designating more accessible parking spaces on the street outside St. John’s — at minimal cost to the parish.

“Physical disabilities should not stop you from being involved,” Hickey said. “Not only is St. John’s accommodating to me and my family, but we feel welcome and happy to be able to be active members of the church community. I feel St. John the Baptist Church is taking responsibility for spreading God’s love to all of His people, even with disabilities.”

The changes at St. John have been a parishwide effort. When Father Budzinski noticed that the only seating available for those using wheelchairs and power chairs was in the back of the sanctuary, two front pews were reconfigured to accommodate them. Two parishioners who were skilled in woodworking cut the pews and shortened them: Now worshippers who use wheelchairs are able to sit in the front, and there’s enough pew space beside them for their families to join them.

Other accommodations required more effort and were more costly. A parish survey revealed an issue with the Mother Guerin Adoration Chapel: There was no way for people using wheelchairs to access the building to spend quiet time adoring Jesus. Work on an access ramp began after Father Budzinski and the Building and Grounds Committee collaborated to rectify the oversight. The ramp is now complete and will be ready to use soon.

Another accommodation St. John has recently installed is the Loop Assisted Listening System, which enables those who are hard of hearing to more fully participate during Mass. Part of a recent parish Capital Campaign Fund was earmarked to cover this cost.

In addition to making the building itself more accessible, St. John the Baptist Parish also has made the sacraments more available to those with cognitive disabilities. Hugh Baldus expressed his gratitude to the parish and diocese for helping his 17-year-old son Griffin, who has autism, receive the sacraments that had been put “on hold after baptism.” Griffin was confirmed in September at a bilingual, low-sensory Mass in Warsaw.

Of the Mass, Baldus said, “The experience was profound and we know that our son was deeply affected, even if he was unable to communicate it to us verbally.” The Baldus family is now planning for Griffin’s first Communion as well. 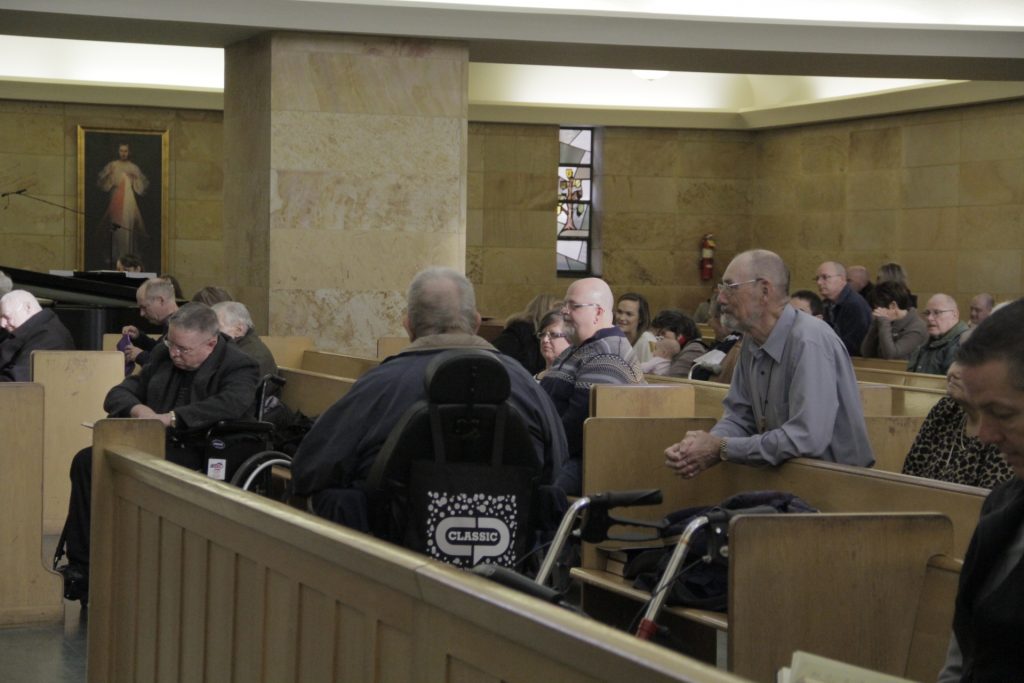 Kelley Nebosky has a wheat allergy that she thought prevented her from receiving Communion. As the source and summit of her faith, she desperately missed the Eucharist. “It was a huge loss. I still felt God’s presence in my life, but missed the tangible experience of Communion,” she said.

In accordance with the instruction of the Church, St. John designated a separate chalice for Nebosky to prevent cross-contamination so she can receive Communion in the form of the Precious Blood.

It is a joyful moment for her. “It is very moving to receive the Precious Blood after such a long absence. Each time I receive it, I am more aware of how God is working in my life and His purpose for me.”

By seeing the needs of those around them, the people of St. John came together to serve as Jesus served by supporting those with disabilities. In the Diocese of Fort Wayne-South Bend there are resources available to parishes who yearn to make similar accommodations. In addition, there are individuals from different parishes who make up a group known as “Belonging” that assist this work of the diocese. Its members are a driving force in bringing important issues to consider on a diocesan level, as well as being instrumental in working with their own pastors and parish communities to make a difference.

For more information visit www.diocesefwsb.org/disabilities or contact Sturm at 260-399-1452 or [email protected]