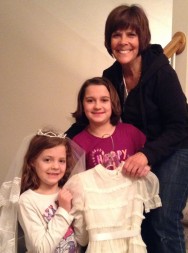 Barbara Coons passes on her faith and first Communion dress to her granddaughters, Claire and Carley Carmichael.

GRANGER — A sweet white organza, 1950s-styled first Communion dress with small six-petal flowers embossed across the fabric hangs on a simple hanger. With a Peter Pan collar and small white lace edging, puffed sleeves, classic waist, with a fitted attached slip and tied bow, the same dress has been worn by seven different girls — about to be eight this April. Barbara Coons has proudly worn and saved this dress, for the past 58 years.

Growing up in Menomonee Falls, Wisconsin, Barbara’s mother first bought the dress for her elder sister, JoAnne. Her father worked as Gerber Baby representative and her mother (Mary Stratz) as a homemaker. Barbara wore it next for her first Communion on May 5, 1963 at Good Shepherd Parish, then sharing it with her sister Marilyn, who is 18 months younger. Then the beautiful, princess dress hung in a closet until the second generation was of age.

“I always knew where it was,” Barbara explained. “I put it in the back of my daughter’s closet when she was first born.”

But Barbara first loaned it to her niece, Sherry, who wore in with fresh flowers in her hair. Barbara’s oldest daughter, Colleen enjoyed it next in Wisconsin and added the veil and crown to the ensemble. Then Kelly, her younger daughter wore the dress making her first Communion at Christ the King, South Bend, in the 1970s.

Kelly Carmichael then cared for the family heirloom. Her daughter, Claire Carmichael wore the dress under her white robe at St. Pius X Parish, Granger, two years ago.

This year is special, for it is the last of the third generation’s turn. In April, Carley, Kelly’s youngest daughter, a second grader at Horizon Academy, will receive the sacrament of the Holy Eucharist for the first time at St. Pius X Parish.

Carley said she was “scared” of the experience, but her older sister Claire smiled and told her, “It will be okay.” Both granddaughters were excited to wear their family’s special dress.

Carley’s grandmother, Barbara, smiles and loves “the connection we all have.”

“I am very close with my family and grateful for having been very blessed,” Barbara said.

She was amazed that even though they all were different sizes, ages and shapes, each girl fit the same dress perfectly and loved it. A “sentimentalist saver,” Barbara keeps all of the girls’ first Communion photos as well as beautiful, German prayer cards from her parochial school in Wisconsin together in her childhood prayer book. She credits her mother, now 89, who just this past year moved in with her brother in Wisconsin, for being her inspiration. “‘She was pregnant eight times in 10 years,’ my father used to say. She is such a lovely and strong woman, who reminds me that I can do it!”

Barbara hopes that her mother’s good example can continue to be passed down to her granddaughters, as well as the faith that they all hold dear and the beautiful dress they all have graced.