U.S. District Judge Richard Young for the Southern District of Indiana said complaints by Lynn Starkey, the longtime employee of Roncalli High School, did not stand up to the principle of ministerial exception that protects a religious school’s hiring and firing practices from government intrusion.

“When the state interferes with these types of employment decisions, it violates both the Free Exercise and Establishment clauses of the First Amendment,” the judge wrote.

The judge said Starkey’s role at the school was not limited to her position as guidance counselor but that she also helped plan school liturgies, delivered the morning prayer on a few occasions and also took part in school discussions about books to enhance faith formation. 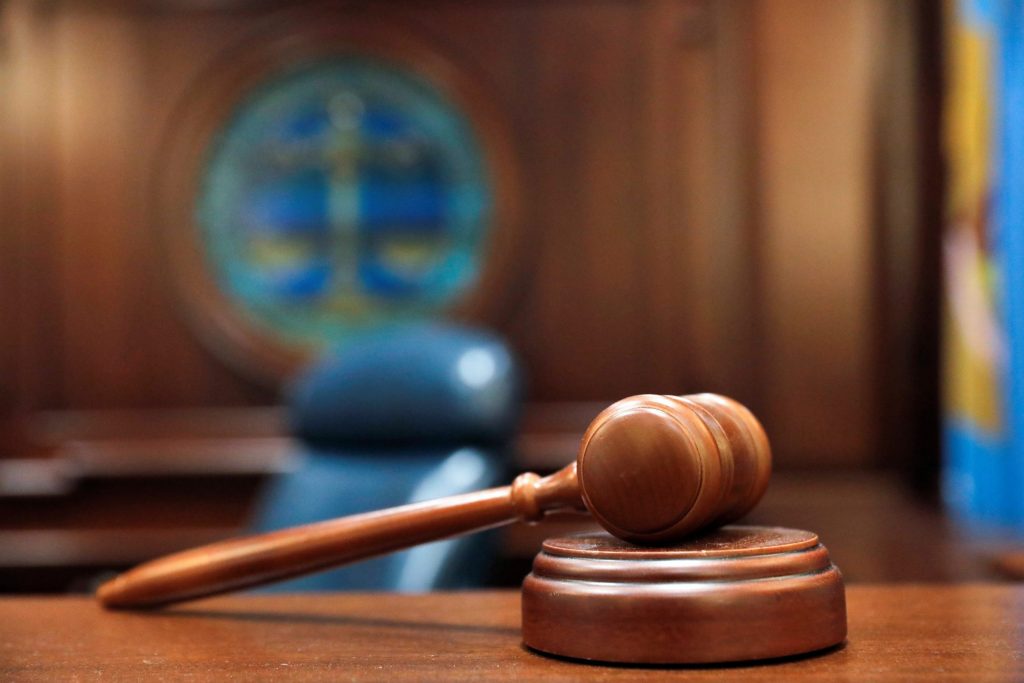 A court gavel is seen in this illustration photo. The U.S. District Court for the Southern District of Indiana ruled Aug. 11, 2021, that an Indianapolis Catholic school and the Indianapolis Archdiocese were within their constitutional rights in firing a guidance counselor for being in a same-sex marriage. (CNS photo/Andrew Kelly, Reuters)

He said the counselor had characterized her work “in purely secular terms” about preparing students for college applications and forms, but that “does not change the result because it would be inappropriate for this court to draw a distinction between secular and religious guidance offered by a guidance counselor at a Catholic school.”

In her 2019 lawsuit, Starkey, who had worked at Roncalli for almost 40 years, said the school and the archdiocese discriminated against her because of her sexual orientation and subjected her to a hostile work environment.

Starkey, who married in 2015, was asked at the start of the 2017 school year to sign an employment contract with the ministerial language clause included. In 2019, she was told she would not be offered a new contract.

Starkey’s lawyer told The Indianapolis Star that she was disappointed with the ruling and “concerned about its potential impact, not just on Lynn Starkey, but on all educators in religious schools.”

“Religious groups have a constitutional right to hire people who agree with their religious beliefs and practices,” he said, adding that “at all levels of the judiciary, courts have made clear that the government has no place interfering with a religious organization’s decision about who can pass on the faith to the next generation.”

He also pointed out in an Aug. 11 statement that the Supreme Court has “recognized that the Constitution forbids secular courts from interfering in important personnel decisions of churches and religious schools,” particularly in its ruling last year in the Our Lady of Guadalupe School case, in which it confirmed ministerial exception.

Goodrich said lower courts are continuing to hold up this principle as a means of “keeping secular courts out of questions of faith.”

The school counselor’s lawsuit is similar to a lawsuit dismissed last year by the Indiana trial court filed by a former Catholic high school teacher in Indianapolis who said he was fired in 2019 because of his same-sex marriage.

Joshua Payne-Elliott, who had been a world language and social studies teacher at Cathedral High School, claimed the Indianapolis archdiocese illegally interfered with his job. A trial court had initially ruled that the lawsuit could move forward, but the Indiana Supreme Court sent the case back down and authorized the trial court to reconsider.

School officials announced in 2019 that it had rescinded the teacher’s contract based on the contract’s morality clause.

After Starkey filed her lawsuit against the school and the Indianapolis archdiocese, the archdiocese issued the following statement:

“As head guidance counselor, Ms. Starkey signed a contract acknowledging her role as a leader and committing to promote Catholic teaching, including the traditional Catholic teaching on marriage.”

It said she “knowingly violated that contract” and that her disagreement with Church teaching on marriage demonstrated she would “not be able to uphold and model it for her students.”

The archdiocese said that many families “have sacrificed so their children can attend schools where they will learn the Catholic faith. They rely on the archdiocese to uphold the fullness of Catholic teaching throughout its schools, and the Constitution fully protects the Church’s efforts to do so.”