INDIANAPOLIS (CNS) — A Department of Justice announcement in mid-June that it would resume federal executions beginning at a federal prison within the Archdiocese of Indianapolis drew words of remorse and prayers from Catholic leaders for the crime victims of as well as for the inmates slated to die.

In offering the prayers, Indianapolis Archbishop Charles C. Thompson acknowledged in a statement “the suffering and sorrow” of the family and friends of the victims, and said that “we must do what we can to help them heal from the deep and personal wounds they have suffered.”

At the same time, he cited the words of Pope Francis’ August 2018 revision of paragraph 2267 of the Catechism of the Catholic Church, which states that “the death penalty is inadmissible because it is an attack on the inviolability and dignity of the person.”

The archbishop’s statement came in response to the Justice Department’s plans to resume executions at the Federal Correctional Complex in Terre Haute, located in the archdiocese.

Five executions were originally slated to take place in December 2019 and January 2020. One inmate received a stay of execution. In the other four cases, lawyers challenged a new protocol for the executions, resulting in a preliminary injunction.

In April, an appeals court overruled the preliminary injunction, leading to the June 15 rescheduling of four of the executions of Danny Lee, Wesley Ira Purkey, Dustin Lee Honken and Keith Dwayne Nelson. The men were convicted of killing children in separate crimes. Three executions are scheduled to take place in July and one is scheduled for August.

Attorney General William Barr had announced last year the federal government was reinstating the federal death penalty. At the same time, he said the executions would use a single drug instead of a three-drug protocol carried out in most recent federal executions and by several states. The planned use of the one-drug method is what led to the court challenge by some of the federal death-row inmates.

Once the appeals court ruled in the case, Barr rescheduled the executions. On June 29, the U.S. Supreme Court said it would not hear the federal death-row inmates’ appeal in their challenge of the method to be used in their upcoming executions.

Archbishop Paul S. Coakley of Oklahoma City, chairman of the U.S. bishops’ Committee on Domestic Justice and Human Development, called on President Donald Trump’s administration to reverse its decision, saying June 30 “to oppose the death penalty is not to be ‘soft on crime.’ Rather it is to be strong on the dignity of life.” 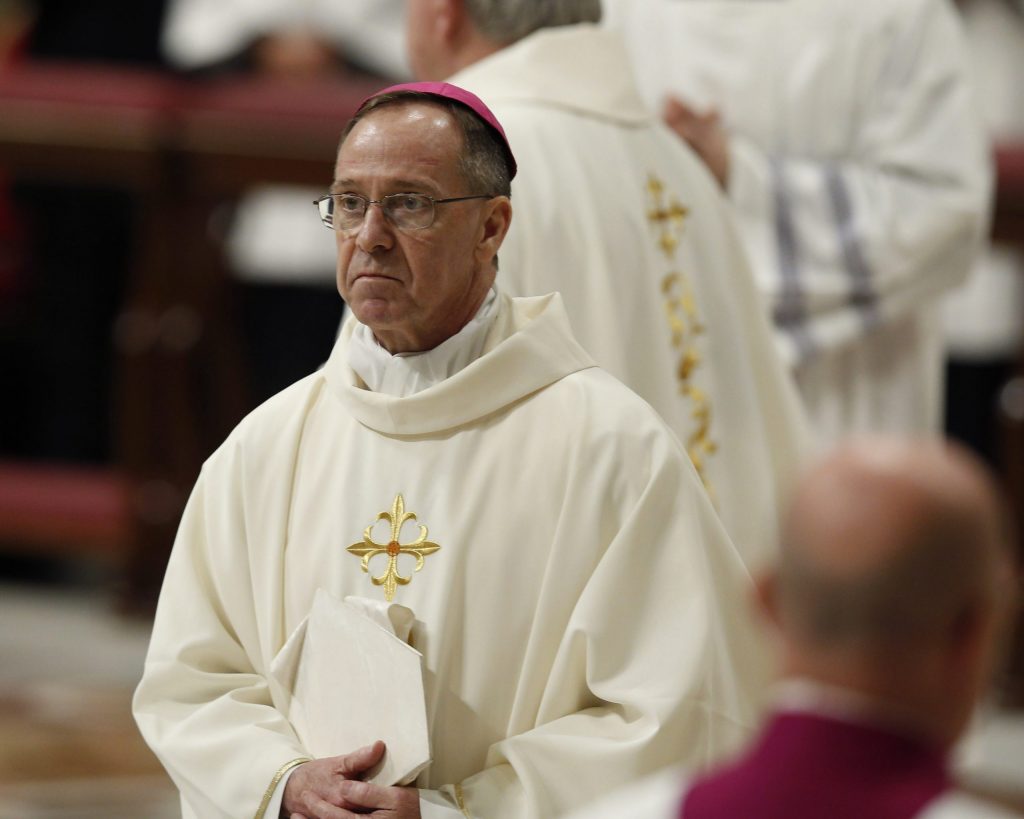 Archbishop Charles C. Thompson of Indianapolis arrives in procession for Pope Francis’ celebration of Mass marking the feast of Our Lady of Guadalupe in St. Peter’s Basilica at the Vatican Dec. 12, 2019. (CNS photo/Paul Haring)

Archbishop Thompson explained that Pope Francis’ revision of the catechism is consistent with the teachings of St. John Paul II and Pope Benedict XVI. “The church has consistently held up the dignity of the person and sacredness of life from the moment of conception to natural death,” he said.

Rather than condoning criminal behavior and heinous acts of violence, he said, the “underlying Catholic teaching on this particular matter is grave concern for the care of souls of all involved — including the judge, jury, prison personnel, families of these officials and society itself. Taking the life of any human being, even one who is guilty of grave crimes against humanity, weighs on the conscience of both individuals and society as a whole.”

Earlene Peterson has publicly opposed the execution of Lee, who was convicted of the killings of her daughter and granddaughter. Peterson, now 80 and a supporter of Trump, asked the president to stop the execution.

“We feel Mr. Lee’s execution would dishonor the memory of my daughter Nancy Ann and my granddaughter Sarah Elizabeth,” Peterson said in a statement June 24. She urged Trump and Barr to commute Lee’s sentence to life in prison.

When Deacon Steven Gretencord heard the news of the rescheduled executions, he said he felt “profound sadness.” Deacon Gretencord has ministered to men on death row at the Terre Haute facility for nearly a decade.

“Our country has just gone through a time of terrible turmoil in the racial confrontations because of our lack of respect of human life,” he told The Criterion, newspaper of the Indianapolis archdiocese. “And now our country is doing it again, not respecting lives by carrying out executions. We’re trying to bring about healing, and we don’t bring about healing by killing.

“That’s where my profound sadness comes in,” Deacon Gretencord said. “The fact that I know these men, yes, that hurts. But on a spiritual level, the concept of execution makes no sense. It’s archaic. It serves no purpose. It’s not a deterrent. That’s been proven time and time again.”

Providence Sister Barbara Battista, who serves as justice promoter for the Sisters of Providence of St. Mary-of-the-Woods, said she also was “surprised” by the timing of the Justice Department’s announcement.

“I do think it’s important to put this (rescheduling of the executions) in the context of the violence that has been and is being inflicted on communities of color across the nation,” she said. “Eyes are being opened across the country to the depth of the violence and how long it’s been happening.”

Sister Barbara said her order and others see the decision “as another act of violence.”

“We know the criminal justice system is deeply flawed, racially biased, and in fact, innocent persons have been executed,” she said. “It’s not debatable. The facts are there. To resume executions in the midst of this awakening just adds more violence on top of violence.”

Terre Haute Death Penalty Resistance, to which Sister Barbara belongs, is working on ways for citizens to petition against the Justice Department decision and on plans for those who wish to pray or protest to be allowed on the prison grounds during the executions should they occur.

Meanwhile, Deacon Gretencord said, the focus must remain on the dignity of all human life.

“Yes, these men made terrible mistakes,” he said. “For some, it was a matter of passion. And yes, sometimes it was even cold-blooded. But they were mistakes.

“They’re human beings. In order to teach that all life matters, we have to live it, we have to believe it and act on it.

“Their lives are just as important as any other life.”