Feast of Our Lady Of Guadalupe Celebrated At St. John’s, Goshen

The Hispanic community of St. John the Evangelist Catholic Church in Goshen celebrated the Feast of Our Lady of Guadalupe with several activities and Mass on the feast day, Dec. 12.

The evening began in a darkened, standing-room-only church where several parishioners reenacted the apparitions of the Virgin de Guadalupe to Juan Diego in Tepeyac, Mexico, in 1531. 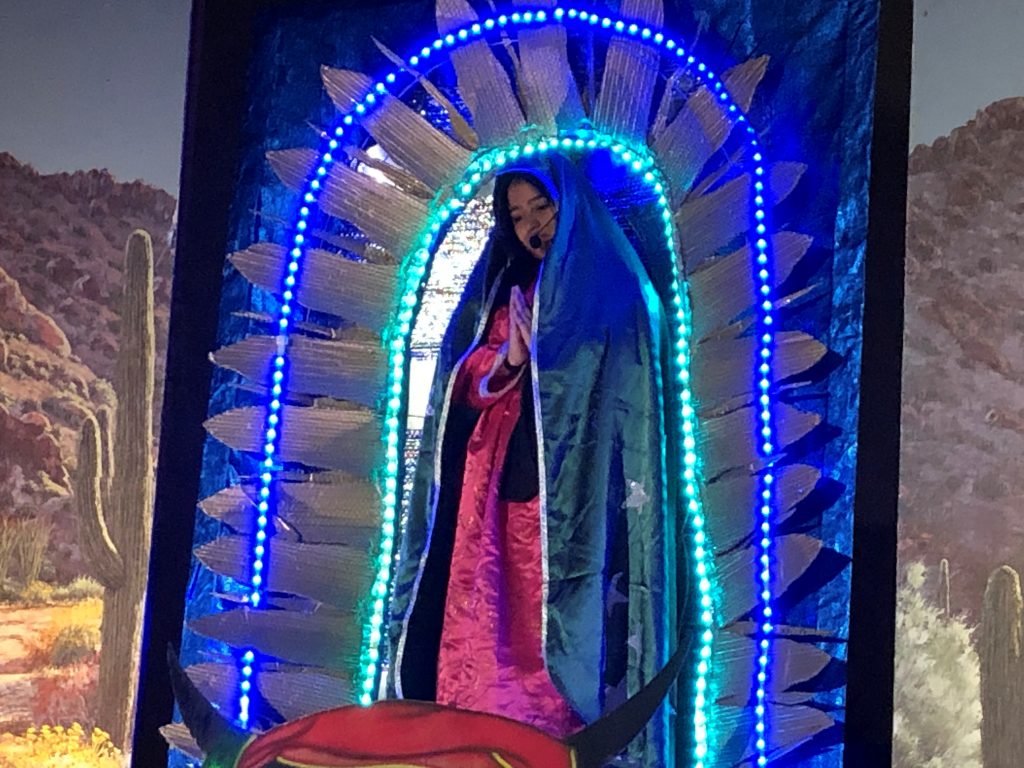 Photos by Denise Fedorow
Parishioner Sarah Lozano portrayed Our Lady of Guadalupe during a reenactment presentation held at St. John the Evangelist Catholic Church in Goshen on Monday, Dec. 12.

Juan Diego Cuauhtlatoatan, an indigenous peasant who was canonized in 2002, had a habit of walking along the path by Tepeyac Hill to the monastery of Mexico City to attend Mass. The first apparition occurred on Dec. 9 when Juan Diego, portrayed by Fermin Cortez, heard music and saw a beautiful lady who called his name and said, “Know for certain, least of my sons, I am the perfect and perpetual Virgin Mary, Mother of Jesus, the true God through whom everything lives — the Lord of all things near and far, the Master of heaven and earth. It is my earnest wish that a temple be built here in my honor. Here I will demonstrate, I will manifest, and I will give all my love, my compassion, and protection to the people.”

The site where Our Lady was requesting a church be built reportedly had an Aztec temple upon it and was where hundreds of human sacrifices had been performed. 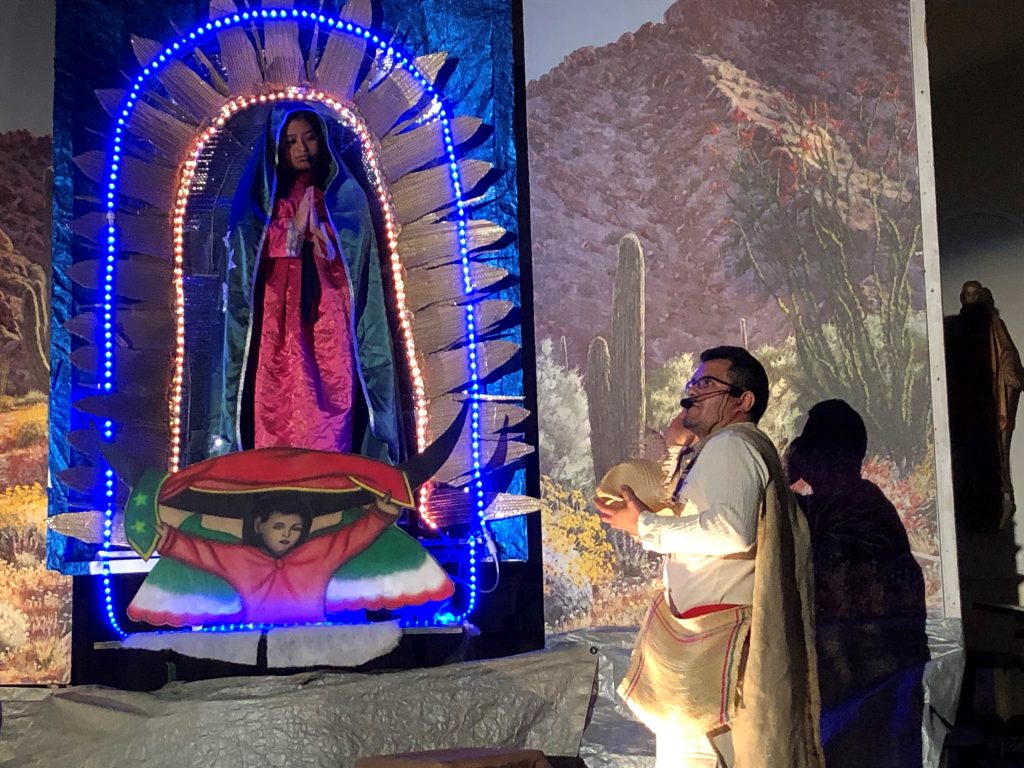 Parishioner Fermin Cortez acts out reporting to the Virgin de Guadalupe, portrayed by Sarah Lozano, that the bishop asked for a sign.

Juan Diego shared with Bishop Zumarrago, portrayed by Ronaldo Muñoz, what the Virgin told him and the bishop listened politely but was unconvinced.

The next day the Virgin de Guadalupe, portrayed by Sarah Lozano, appeared again to Juan Diego and repeated her request. Juan Diego went back to the monastery and this time the bishop asked for a sign. Juan Diego reported that to Our Lady and she advised him to return to her the next day and she’d provide a sign. 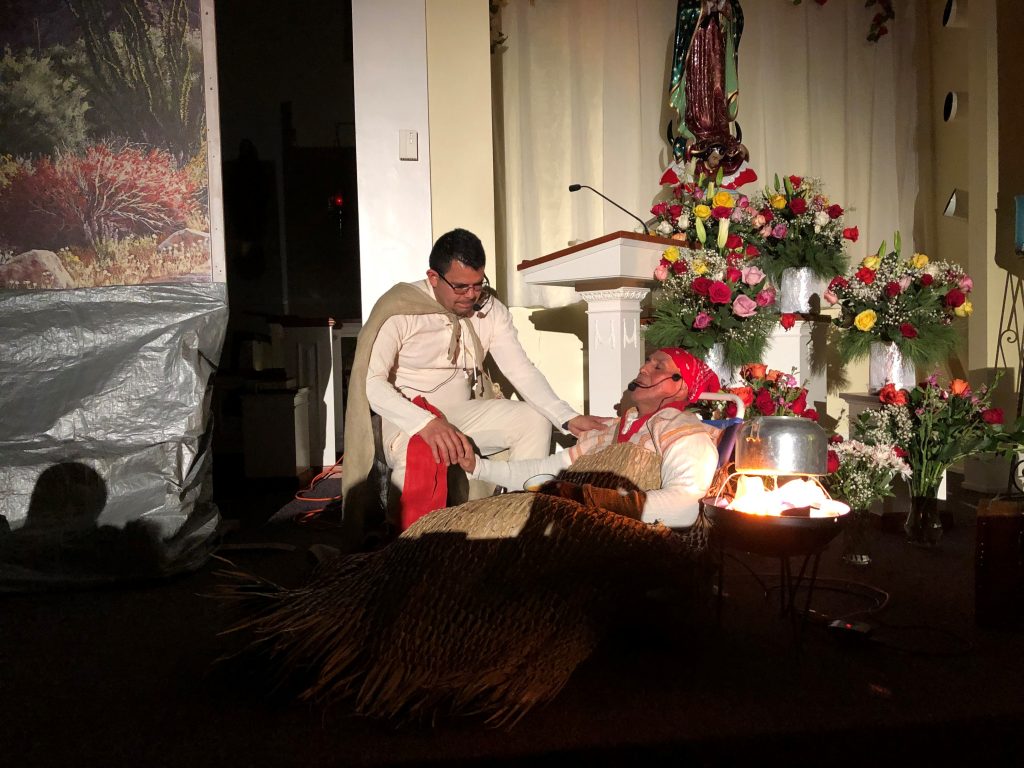 In the meantime, Juan Diego’s uncle Juan Bernardino, portrayed by Arturo Cervantes, was very ill and he asked Juan Diego to bring a priest to him so he could confess and receive the Viaticum. On Dec. 12, Juan Diego set out to do so, avoiding Tepayec Hill because he was ashamed that he hadn’t returned to Our Lady the day before as she requested. But Our Lady appeared to him and told him she had healed his uncle and Juan Diego should go to the top of the mountain and pick flowers.

The earth was dry and brown and only cactus grew there, but when Juan Diego arrived, he saw Castilian roses that were foreign to Mexico. He gathered them in his tilma, a poncho-like garment, and brought them to the Virgin de Guadalupe who told him to bring them to the bishop. When Juan Diego brought the roses to the bishop, he saw not only the flowers but also a beautiful image of Our Lady of Guadalupe imprinted upon the tilma. The bishop asked forgiveness for doubting and by Christmas of that year an adobe structure was built atop Tepeyac Hill.

After the reenactment, the Guadalupano dance group in the costumes of the Aztec and Mayans, but many bearing images of Our Lady of Guadalupe, performed. The dance was in joy and celebration of Our Lady bringing them to Jesus. The whole church shook with the pounding of the drums and stomping of feet. 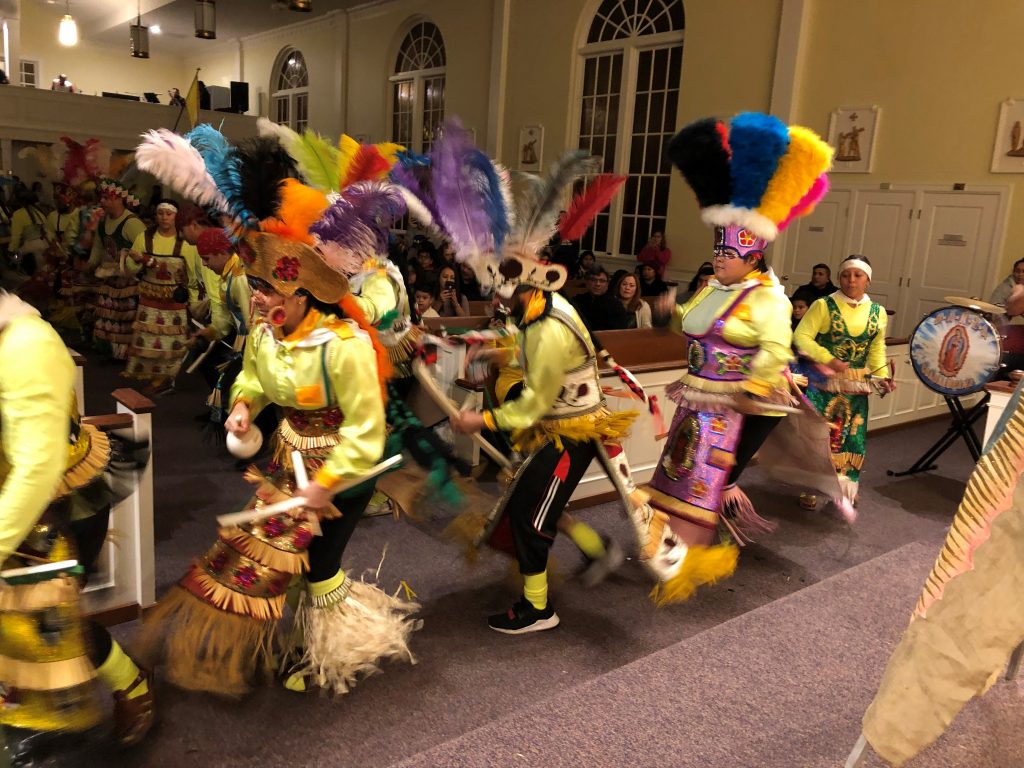 The Guadalupano dancers at St. John the Evangelist Catholic Church in Goshen kneel at the conclusion of one of the dances performed on the Feast of Our Lady of Guadalupe on Monday, Dec. 12. Celebration of the feast day included a reenactment, the dances, Mass, and a meal with Mariachi music in the parish center following Mass.

After the dance, Father Royce Gregerson celebrated Mass. During his homily, he mentioned it has been 492 years since the apparitions, how her apparitions helped convert many indigenous people to Christianity, and how that conversion put an end to brutal, barbaric human sacrifices. Father Gregerson said Mary’s mission is to bring people to her son, Jesus, and that is done most perfectly in the Eucharist.

According to Pastoral Associate Johnny Evangelista, Father Gregerson also spoke about the necessity to foster Hispanic vocations to the priesthood and religious life — especially because the population in the United States is 50 percent Hispanic. Despite that, Father Gregerson said there are not a lot of vocations from the Hispanic community.

Father Gregerson said they need to foster and do a better job of encouraging vocations. He also spoke about the importance of Hispanic youth attending Catholic schools and universities to study Theology so there can be more Hispanic personnel in church staff positions across the United States to qualify them for lay positions such as pastoral associates and directors of religious education. Father Gregerson also mentioned the need to foster more holy families and guard our families from drifting away from the Church.

After Mass, there was a dinner served in the parish center that featured Mariachi music. 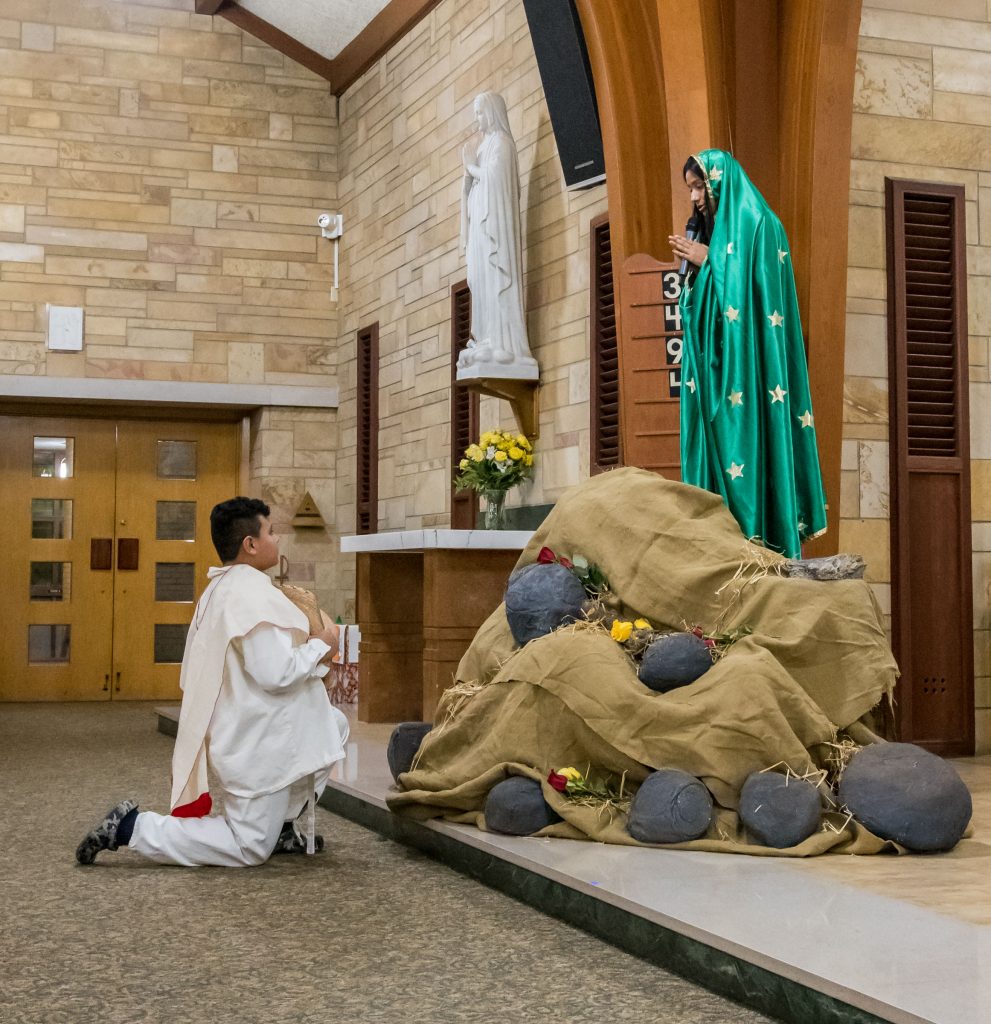 Photos by Joe Romie
St. Joseph Parish, Fort Wayne, renacted the appearance of Our Lady of Guadalupe to Juan Diego on Monday, Dec. 12. Mary is played by Jeanelly Hernandez, and Juan Diego is played by Uziel Gutierrez. 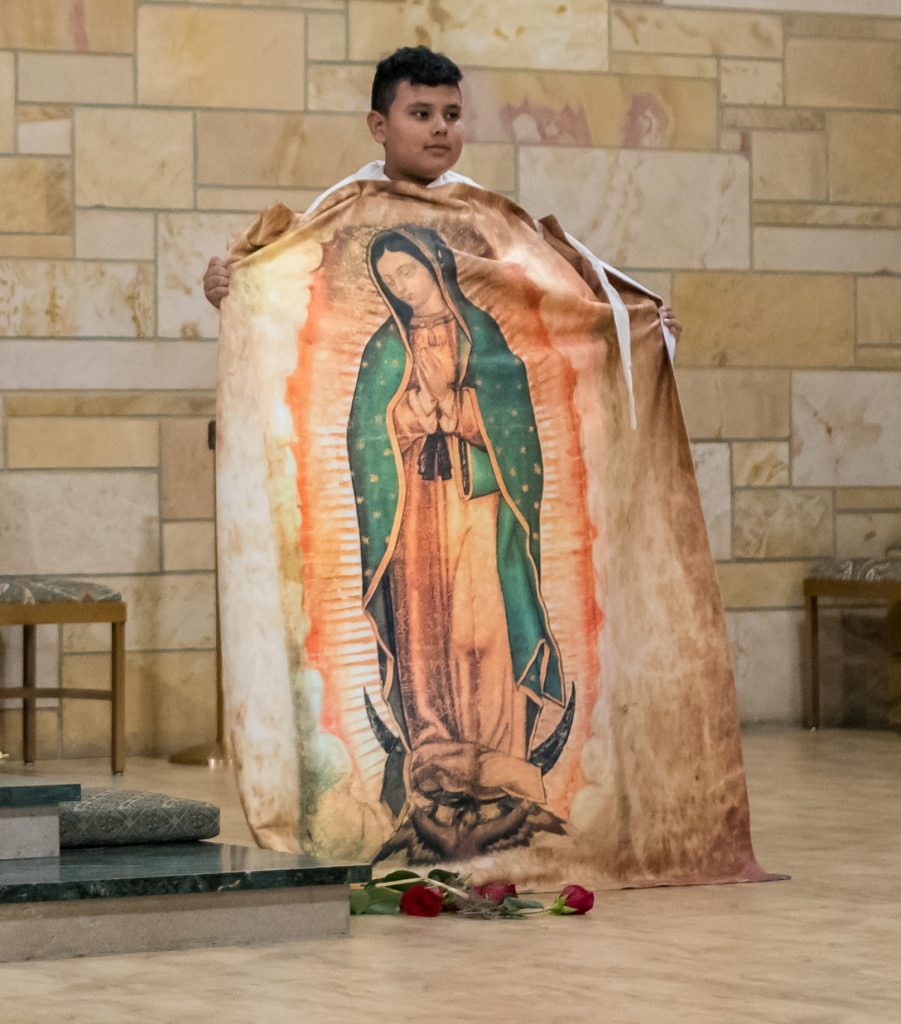 Juan Diego reveals the image of Our Lady to his bishop
after being asked for a sign so that all may believe. 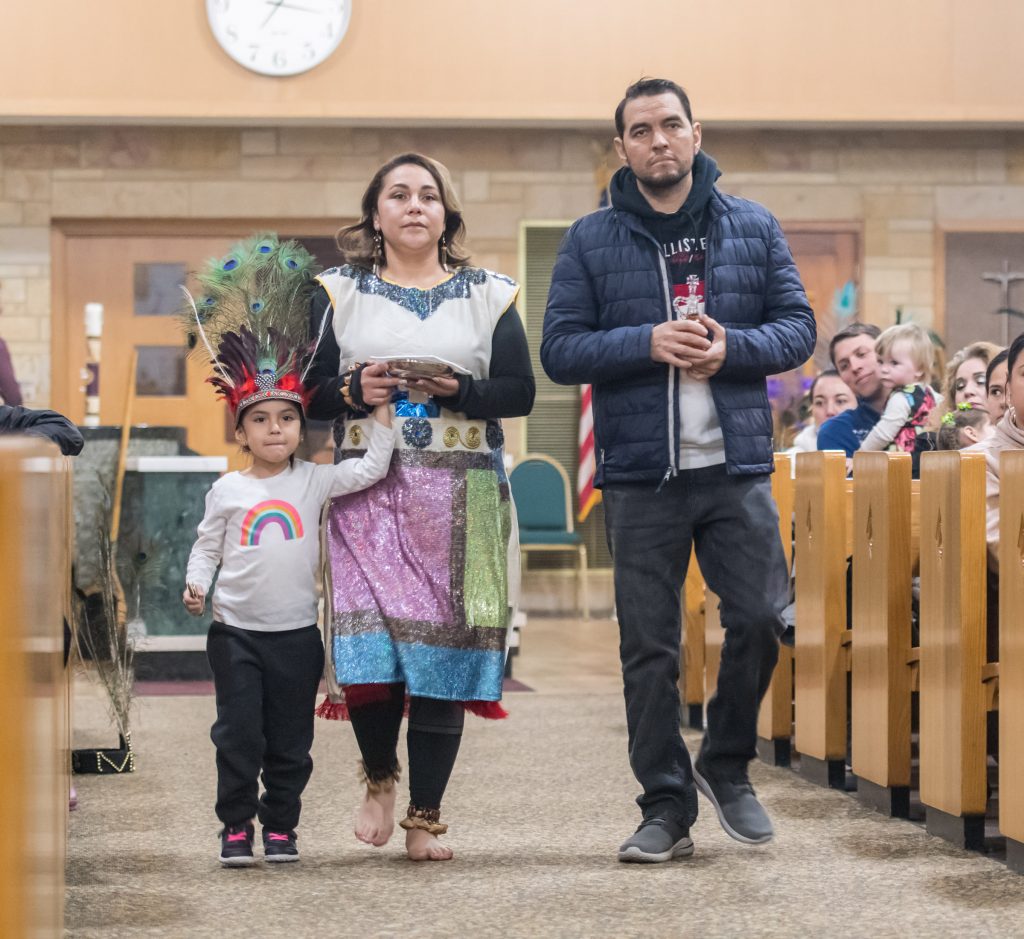 The offertory gifts are brought up by Jaime, Beatriz, and Emily Nuñez. 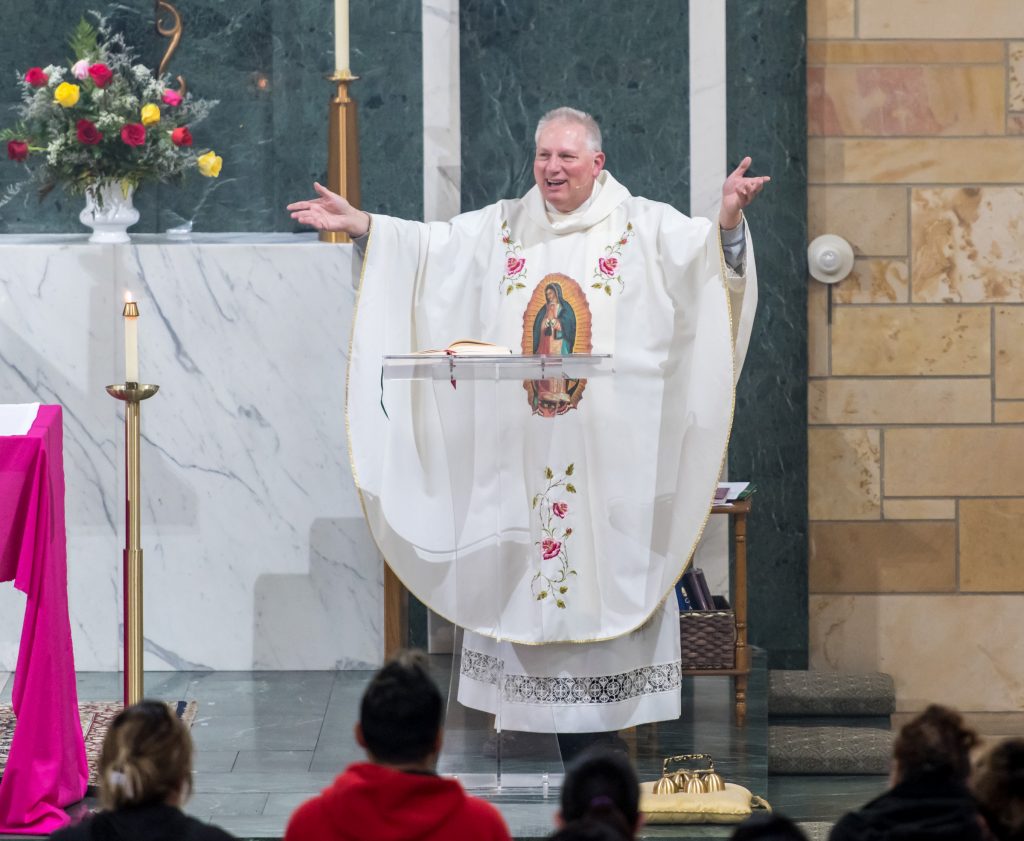 Father Kevin Bauman rejoices with the parish on the special feast day of the Virgin Mary of Guadalupe. 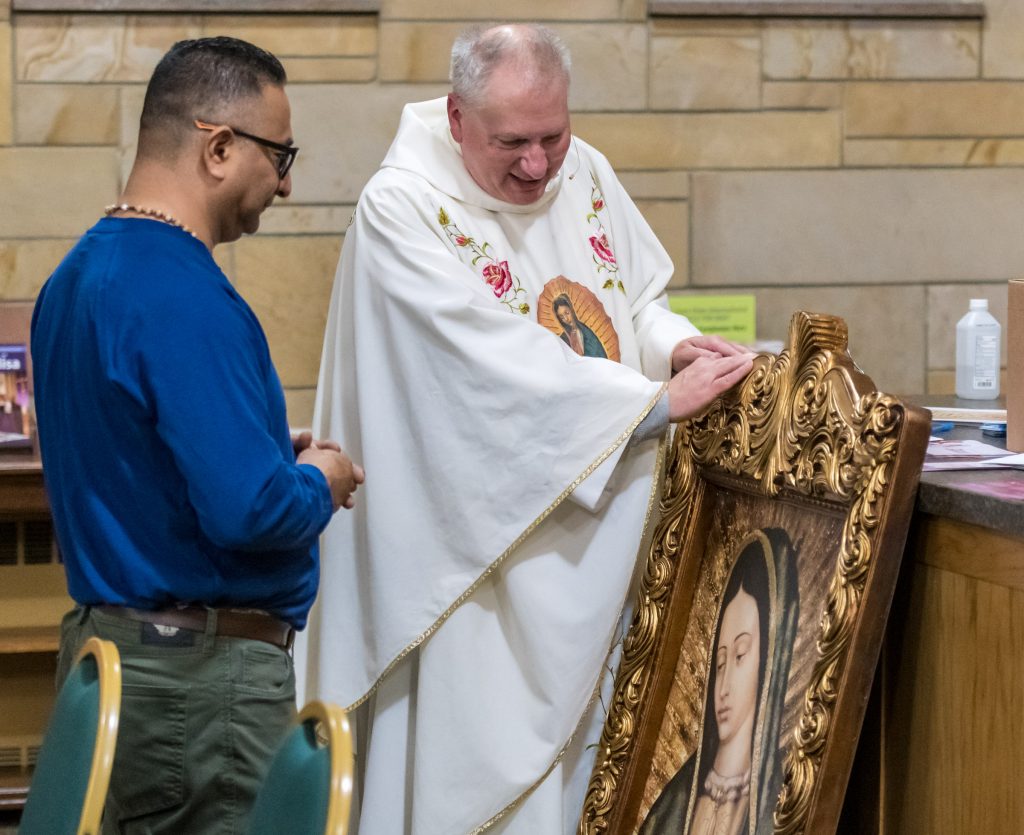 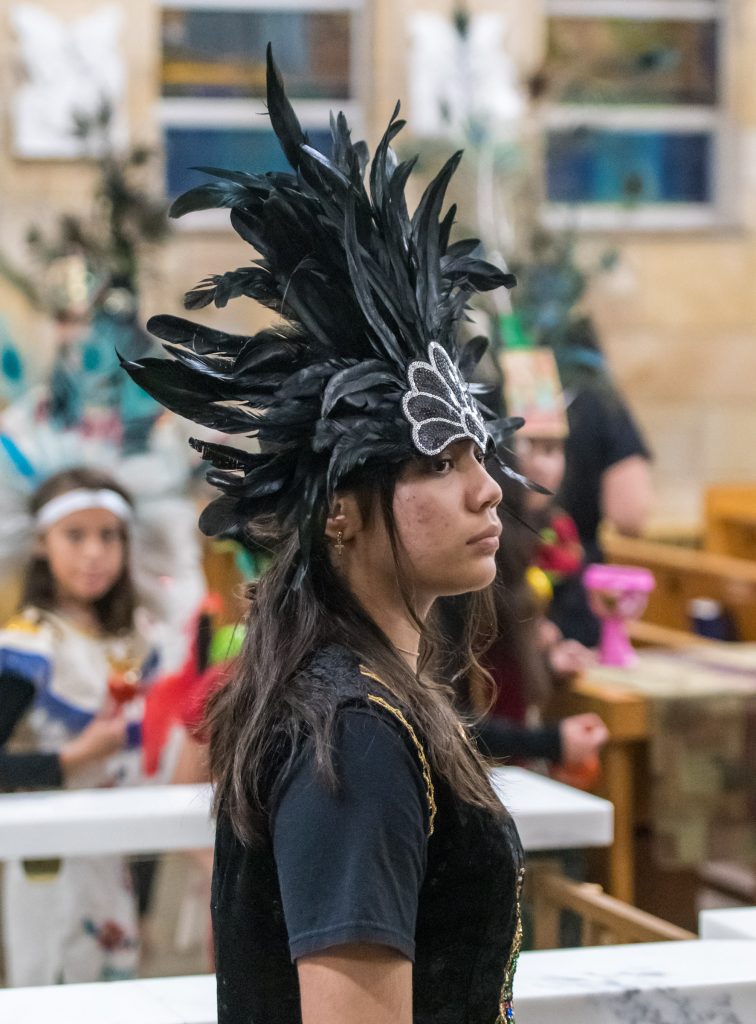 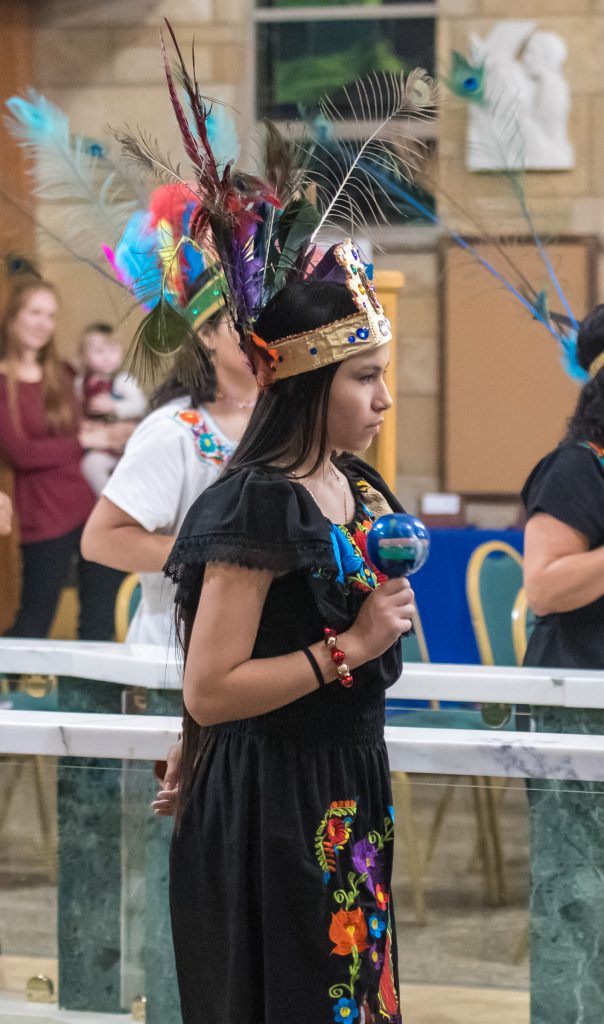 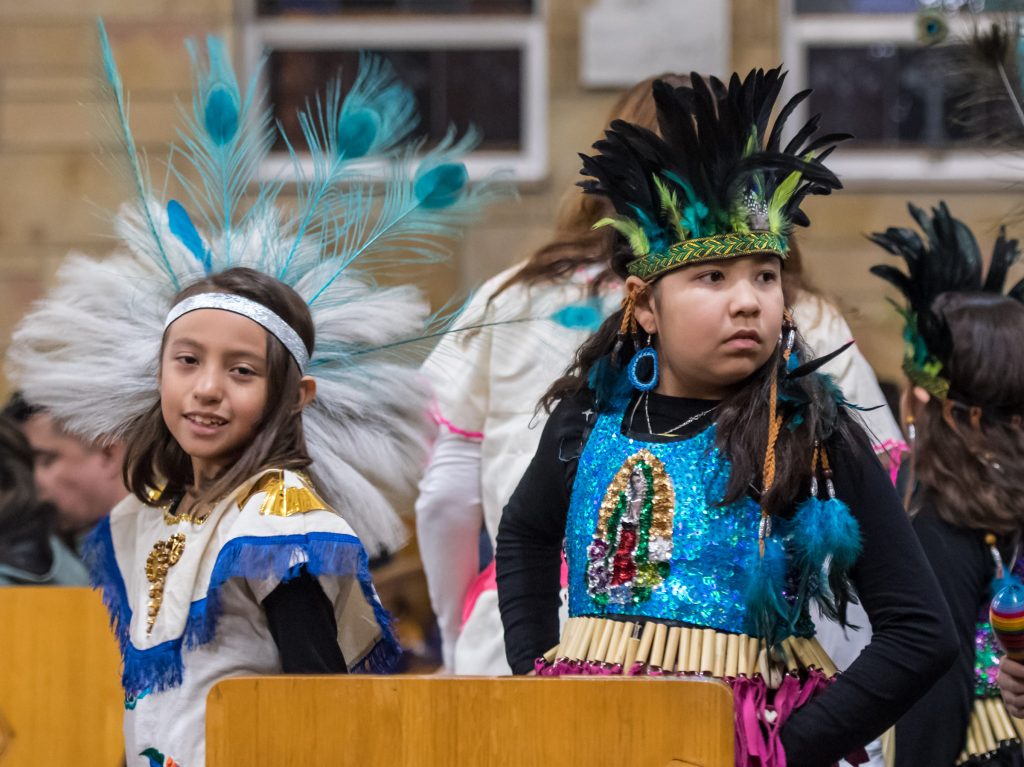 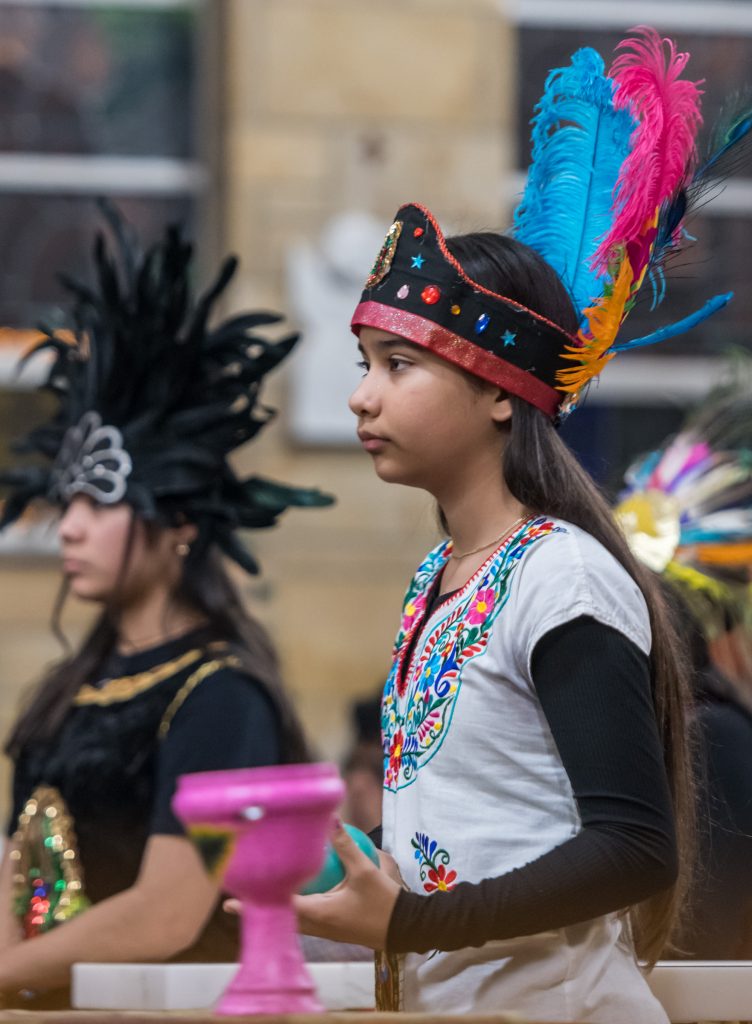 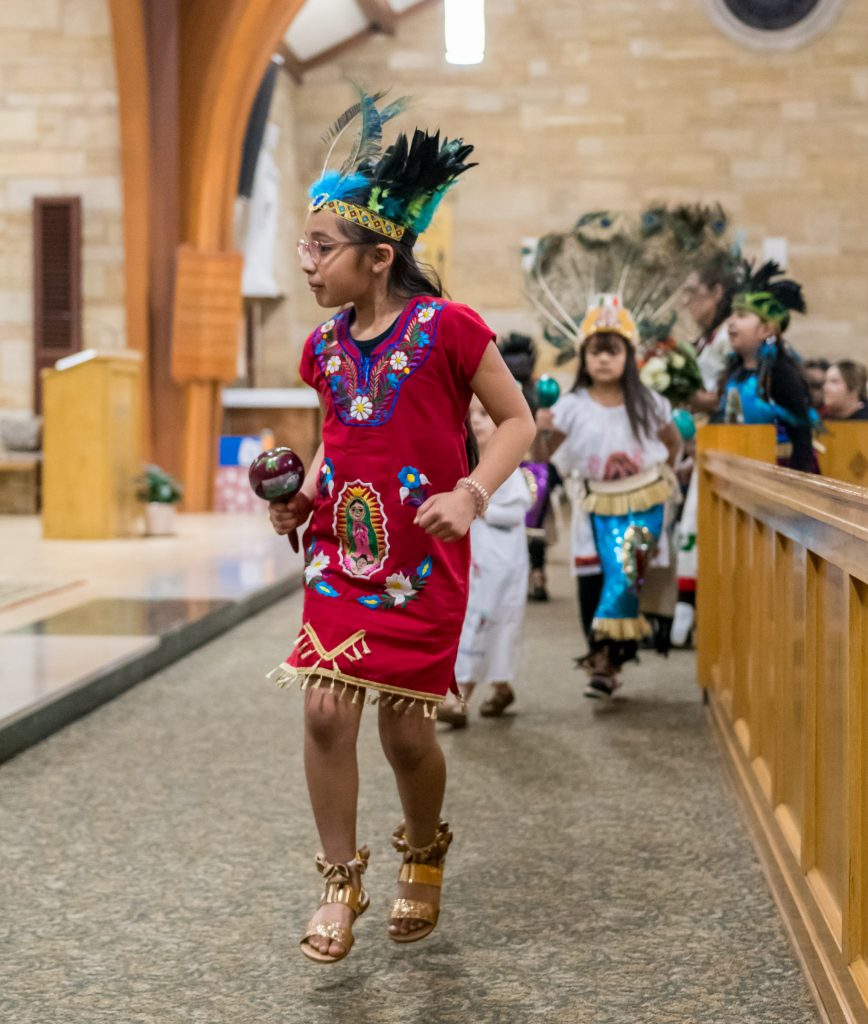 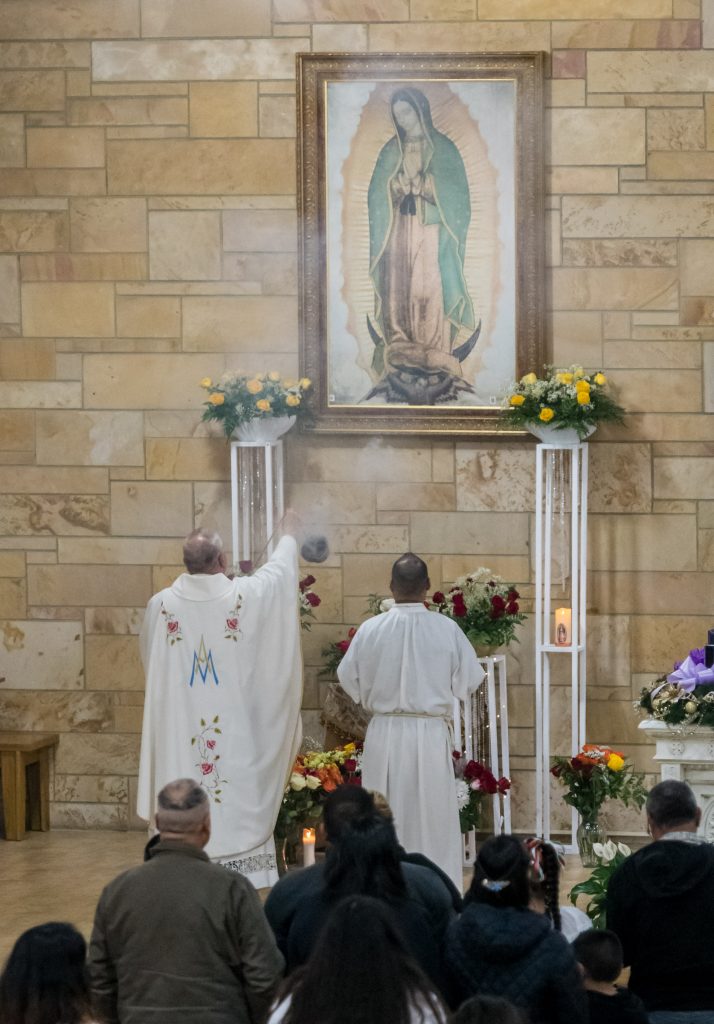 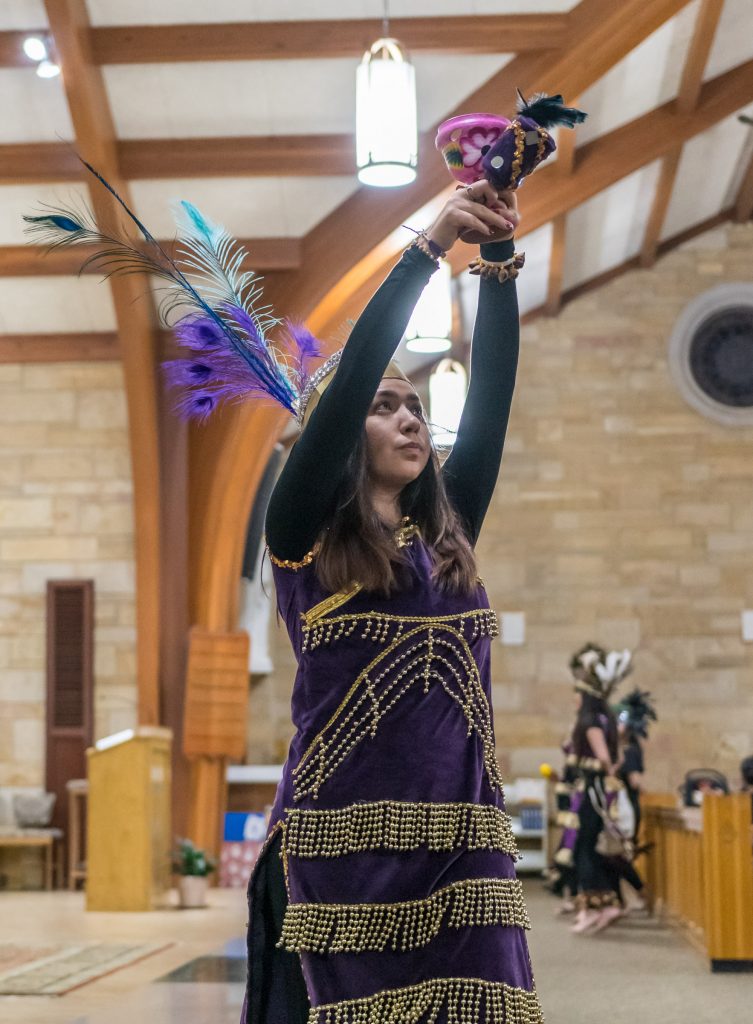 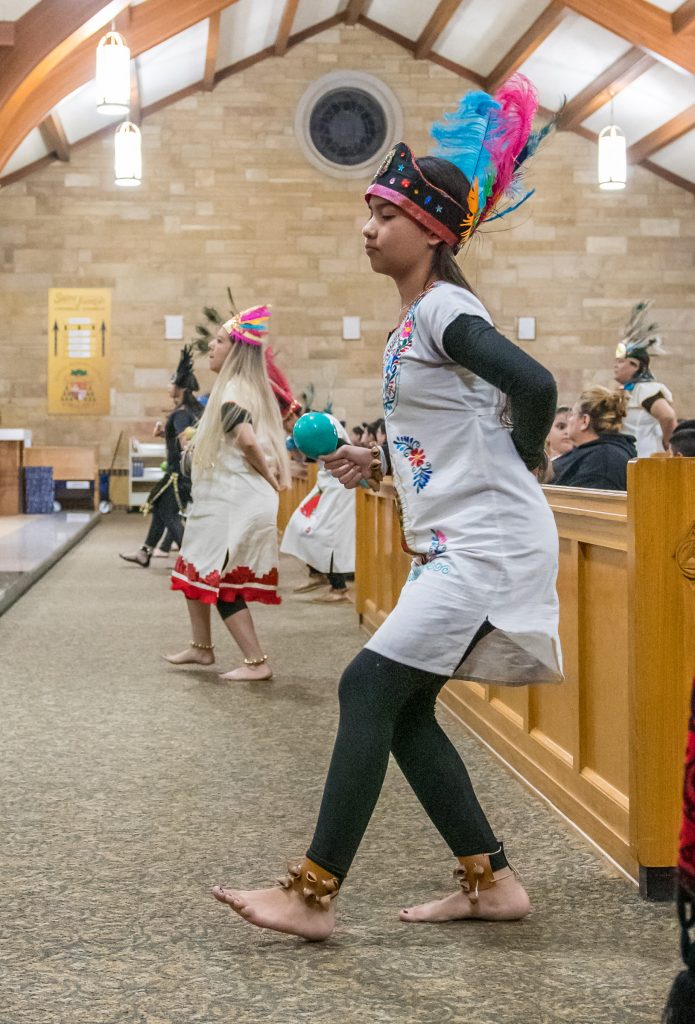 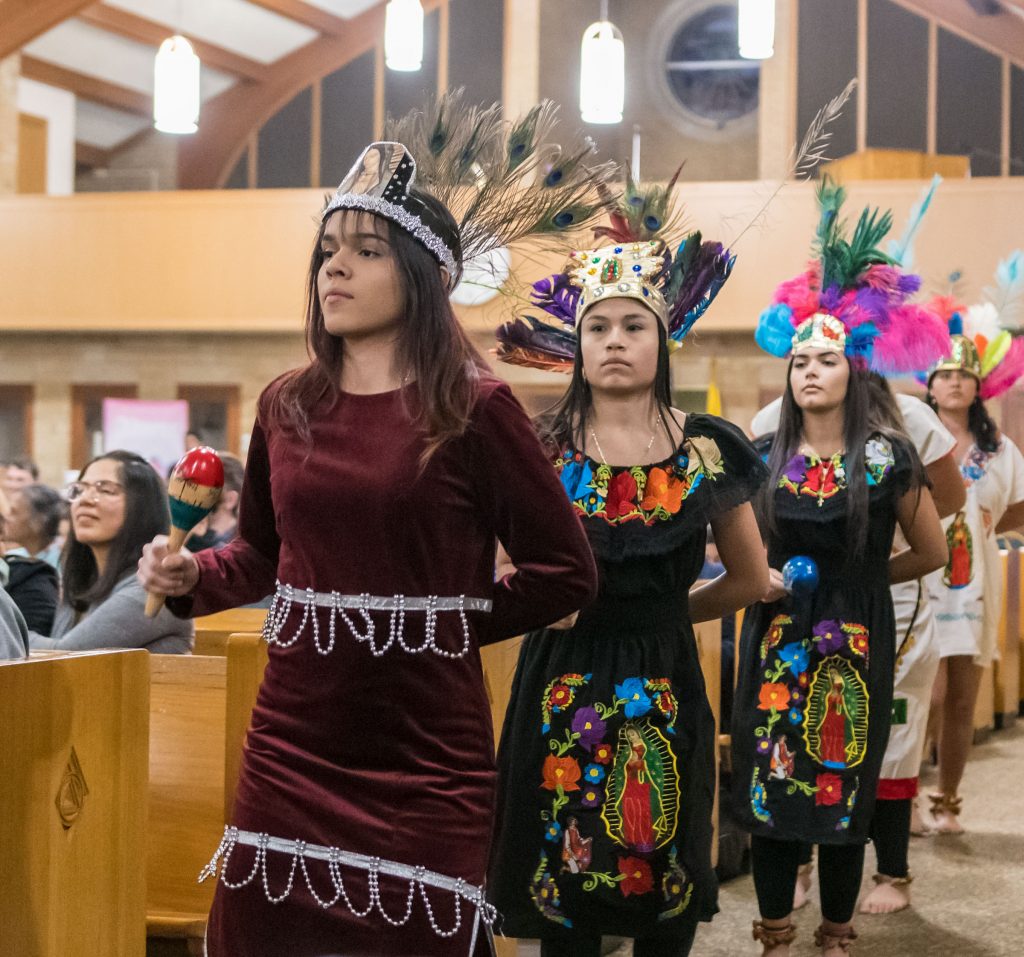 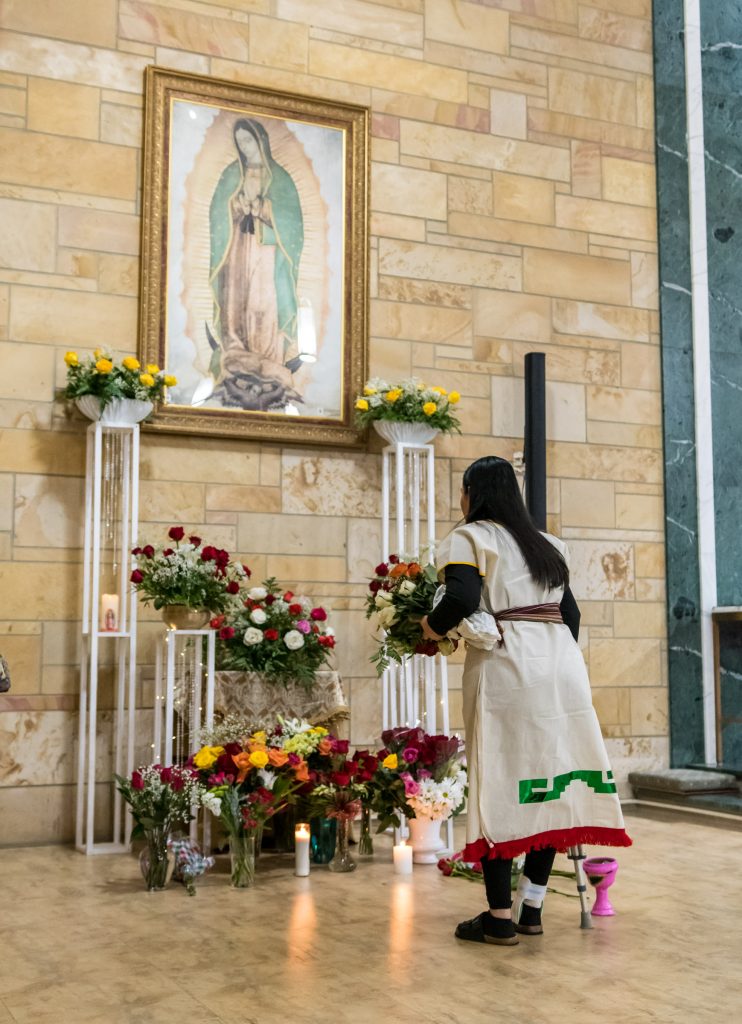