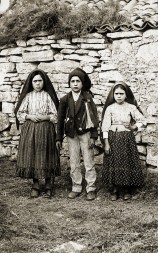 Lúcia Santos (left) with her cousins Jacinta and Francisco Marto, 1917.

In 2017, Catholic faithful the world over will observe the 100th anniversary of the appearance of the Virgin Mary to three children in Portugal. With this issue, Today’s Catholic inaugurates coverage of the observance of the anniversary in the Diocese of Fort Wayne-South Bend and beyond.

The Fatima apparitions began with three apparitions from the Angel of Peace, followed by six apparitions from Our Lady of Fatima. The angel appeared to 9-year-old Lucia Dos Santos and her 6- and 8-year-old cousins, Francisco and Jacinta Marto, during the spring, summer, and fall of 1916. During each apparition, the angel taught them various prayers and told them to offer their prayers and sacrifices to God as a petition for sinners.

After the third apparition of the angel, Our Lady appeared to the children on May 13, 1917. On this day, the children were tending their sheep at the Cova de Iria when a bright light shone in the sky. After another flash, Our Lady, dressed in white, appeared and told the children that she was from heaven. She asked them to come to the same place, during the same hour, on the 13thof the month for the next six consecutive months. During her sixth appearance, she asked the children to pray the rosary daily for peace in the world and for an end to the war that was raging.

Fifty people joined the children during the second apparition and prayed the rosary with them. The bright light appeared again that day, and Our Lady repeated her instruction to come to the same place at the same hour on the 13th days, as well as continuing to pray the rosary daily. Lucia asked if the children would go to heaven, and Our Lady told Lucia that she would; but that she would first remain in the world in order to establish within it a devotion to the Immaculate Heart. Our Lady explained that she would promise salvation and God’s love to those who embraced her heart.

At her third apparition, Our Lady again told Lucia to continue praying the rosary daily. She also said that she would reveal who she was during the sixth apparition and perform a miracle for all to see and believe. She gave the children the Fatima prayer to recite after the end of each decade of the rosary.

Although authorities prevented the children from going to the fourth apparition, due to the large crowd that gathered with them, Our Lady appeared to the children on the 19th of that month. She instructed them to return to the same place on the 13th of the following month and to continue to pray the rosary daily, as well as continue to offer prayers and sacrifices for sinners.

Around 30,000 people accompanied the children for the fifth appearance and prayed the Rosary together. When Our Lady appeared, she reminded the children to continue to pray the rosary for the end of the war. She also said that the sorrowful Lady, the Lady of Mount Carmel and St. Joseph with the child Jesus would come to bless the world during her next appearance.

For the sixth apparition, on Oct. 13th, 70,000 people surrounded the children as they prayed in a heavy rain. After appearing, Our Lady revealed that she is the Lady of the Rosary. She desired a chapel to be built at the cove in her honor and for people to continue praying the rosary. She also said that the war would finish soon. After speaking, Our Lady opened her hands and launched a ray of light at the sun. The rain stopped and the sun shone brightly.

The sun then turned and projected colored bands of light that covered the sky, the trees and the crowd. After this, the sun returned to normal for a few moments and then repeated the bands of light. The group fell to their knees, begging for mercy, while the children saw a lady dressed in white with a blue cope (mantle) as well as St. Joseph with the Child Jesus. Then they saw the Lord stand with Our Lady of Sorrows as He blessed the world. The Lady of Mount Carmel followed, by finishing the miracle with the sun.

Francisco died on April 4, 1919, and Jacinta on Feb. 20, 1920. Prior to her death, she revealed a number of previously unknown statements made to her by Our Lady about, among other things, the sacrament of marriage and of the priesthood. Pope John Paul II credited his survival after being shot in 1981 to the intervention of the Immaculate Heart of Mary, and consecrated the world to her on Oct. 8, 2000. 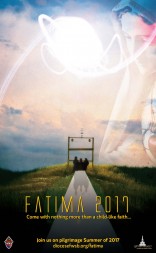 Bishop Kevin C. Rhoades will lead a pilgrimage for the Diocese of Fort Wayne-South Bend from July 7-16, 2017 to Spain and Portugal. While it is significant that the group will be in Fatima on July 13, the 100th anniversary of one of the Marian apparitions to the children in Fatima, the trip provides a broader perspective for the 150 pilgrims who will be attending.

The pilgrims continue their journey to Alba de Tormes, and after a celebration of the Mass at the Carmelite Monastery, where St. Teresa died in 1582, they will be able to see the incorrupt heart and left arm of the saint.

After touring the historic city of Salamanca, the group will travel to Coimbra to visit the Carmelite convent where Sister Lucia, the longest surviving seer of Fatima, spent most of her life. For the next two days, pilgrims will spend the anniversary day in Fatima, with Mass among pilgrims from around the world and touring historic sites in the town.

Prior to departing for home, pilgrims will finish their pilgrimage in Lisbon by visiting the Church of the Eucharistic Miracle in Santarem.

This journey overseas is not only a chance to learn more about the lives of St. Teresa and St. John of the Cross, but also to reflect on the events and message of Fatima. This pilgrimage has been planned by Bishop Rhoades as an opportunity for the faithful to participate in growth in their prayer life and in the virtues of faith, hope and love by turning to Our Lady for help. In an address to the World Apostolate of Fatima, Bishop Rhoades said, “Amid all the trials and troubles we encounter in this life, including the challenges of our culture today, even in the midst of terrible sinfulness and horrors, we must never give up home in the promise that in the end Mary’s Immaculate Heart will triumph.”

For those who are interested in learning more about the pilgrimage, or to be alerted about the dates of upcoming information nights, email [email protected] or call 877-513-1917.