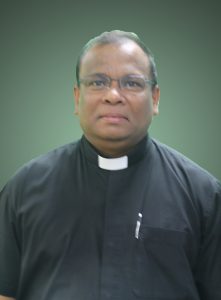 Father Tyrell Alles, OSB, will return to his home diocese of Sri Lanka in the next few months. He has served in the Fort Wayne-South Bend diocese for the past five years. His time serving the diocese was the result of an agreement with his religious community and Bishop Kevin C. Rhoades, a short-term assignment that allowed him to gain pastoral experience before returning to academic and spiritual instruction. He is currently serving as the pastor of St. Peter Parish in Fort Wayne.

Father Alles was born and raised in Sri Lanka, where his parents still reside. He is the oldest sibling to a brother and sister.

He said he heard God’s call to become a community priest at a very young age. Father Alles completed his college education and later found employment with a private company in order to gain some experience in the world. After much prayer and contemplation, he joined the Order of Saint Benedict, Sylvestro Benedictine Congregation, in 1987 and served his community as a religious brother. A short time later, he began his monastic formation in a Benedictine Monastery in Sri Lanka while attending the national seminary there for his philosophical and theological studies.

Prior to coming to the U.S., he spent his priesthood studying and later teaching sacred Scripture at the national seminary and other theological institutions in Sri Lanka. In addition, he was involved in the academic and spiritual formation of seminarians. He celebrated his 25th anniversary to the priesthood while assigned to St. Peter Parish in 2018.

Father Alles was ordained to the priesthood on Aug. 28, 1993. He says his studies at the Pontifical Biblical Institute in Rome; learning other languages in Germany and France; his doctoral studies in Sacred Scripture at The Catholic University of American in Washington, D.C.; and, meeting Pope St. John Paul II in Rome on three occasions are the most memorable parts of his priesthood thus far.

It has been a couple years since Father Alles celebrated his 25th anniversary of becoming a priest, but his faith remains steadfast. He is prayerfully grateful to God for the gift of his priesthood and for all the blessings he has received over the years. Father Alles hopes that every Mass is a memorable event for those participating in it.

He also continues to reflect on the various experiences he has had in life, the lessons he has learned, and how he can further grow to become not only a holy priest, but one who is also pleasing to God.

Father Alles recalled that teaching and forming seminarians to the priesthood, celebrating the sacraments and being a friend to the parishioners at St. Peter have been among his favorite moments of being a priest serving in the Diocese of Fort Wayne-South Bend. “Thank you, Bishop Rhoades and the parishioners of St. Peter, for your love and concern,” he said.