St. Augustine Parish in South Bend has had a Tolton Society since the 1970s to honor the memory of Father Augustus Tolton. Widely recognized as America’s first African American priest, Tolton reached out to minister to both African Americans and Caucasians in Quincy, Illinois, and then on the streets of Chicago in the late 1800s.

The St. Augustine group’s efforts gained new meaning, though, after they recently became a Tolton Ambassador Corps chapter and took a more active role in promoting Father Tolton’s cause for sainthood.

“You have to remember there are no African American saints,” said Annie Tardy, convener of the Tolton Ambassador group. She would like to see one named in her lifetime, or at least in the lifetimes of her children and grandchildren. 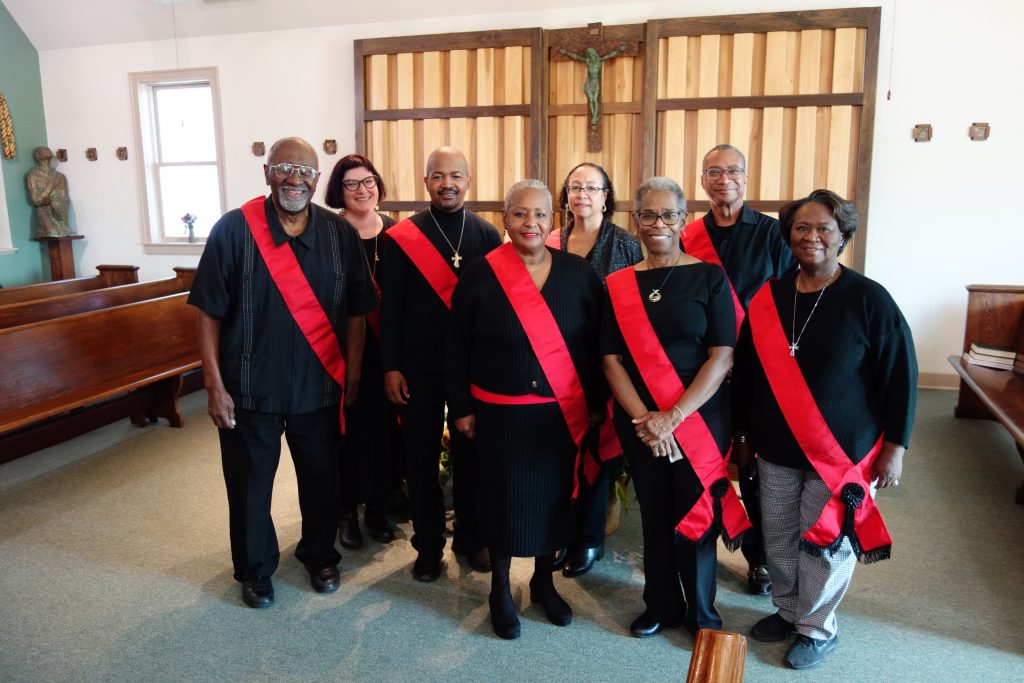 The Church recognizes the contributions of African American Catholics each November during Black Catholic History Month. Currently, there are 11 American saints and four Americans who are recognized as blessed, which is one step away from sainthood, the U.S. Conference of Catholic Bishops reports. Among them are two people who worked in this diocese: St. Mother Theodore Guerin in the mid-1800s in Fort Wayne and Blessed Father Solanus Casey from 1946 to 1956 in Huntington.

The list of American saints and blessed include men, women and an indigenous person, but no African Americans. People from Africa have been canonized as saints, but none of them grew up or were born in what is now the United States.

“When we come into most Catholic churches, we see nothing that looks like us,” Tardy said of the sacred artwork. 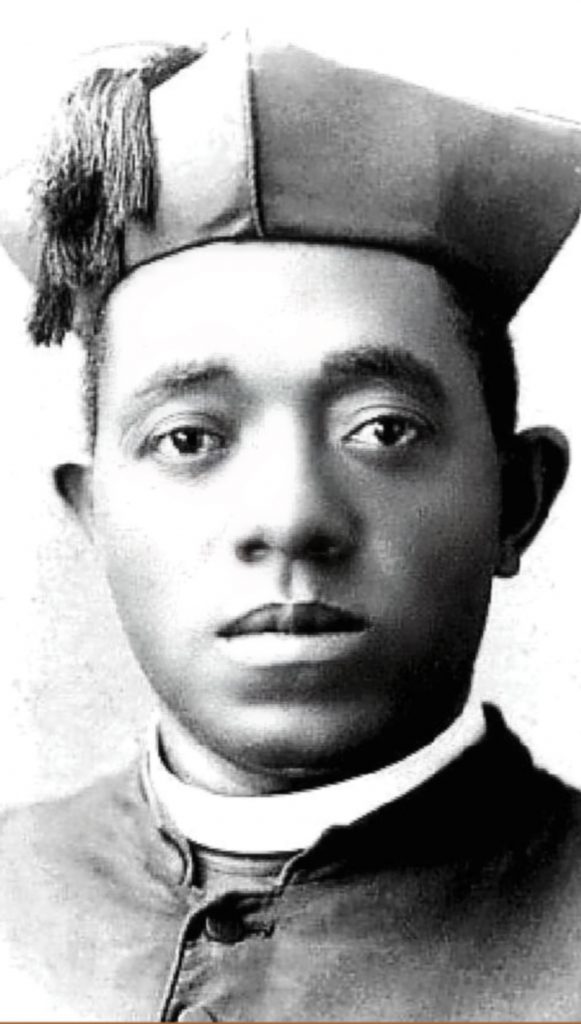 Provided by Diocese of Springfield, Ill.
Venerable Father Augustus Tolton escaped from slavery as a boy and went on to become what many people believe to be America’s first African American priest. Despite enduring racial prejudice, he ministered successfully in Quincy, Ill., and then to African American Catholics in Chicago.

Their focus began to change, however, after the group invited Bishop Joseph N. Perry, an auxiliary bishop of the Archdiocese of Chicago, to speak about Father Tolton in 2014. Bishop Perry is the postulator, or coordinator, of the archdiocese’s official effort to have Father Tolton declared a saint.

After listening to Bishop Perry, St. Augustine Tolton Society members began thinking they should refocus their efforts to more directly support the cause for Father Tolton’s sainthood, Deacon Tardy said.

They invited Father Canon A. Gerard Jordan, O. Praem, of Chicago, who assists Bishop Perry with Father Tolton’s cause for sainthood, to speak at the parish in April 2019. Afterward, Father Jordan suggested their Tolton Society become a part of the Tolton Ambassador Corps. Members also went on pilgrimages to Quincy, where Father Tolton grew up, began his priestly ministry and is buried, and to the area in Chicago where he ministered to African American Catholic families in the 1890s.

Tolton Ambassadors encourage prayer for the sainthood cause of Father Tolton, educate people about him and his exemplary faith, and evangelize by talking about the Gospel and the Gospel in his life, Deacon Tardy said. They also raise funds to support the cause for sainthood.

The 12-member group at St. Augustine currently is the only Tolton Ambassador group in Indiana and one of seven nationwide. The other groups are in Atlanta, Chicago, Detroit, Louisiana, Philadelphia and Washington, D.C.

“The goal is to get the word out any way we can,” Annie said. 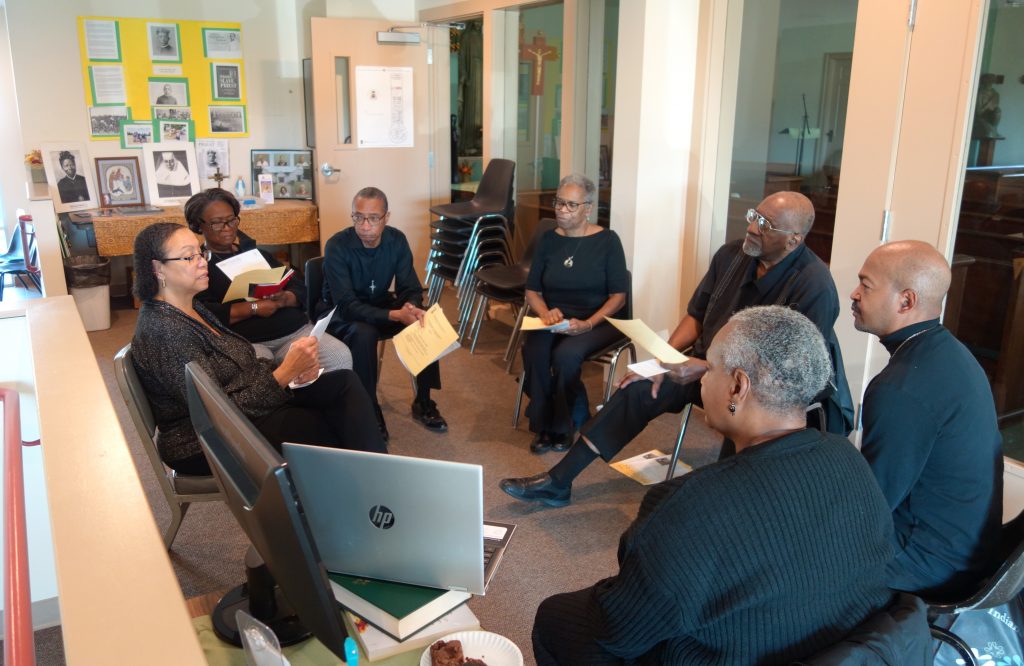 Kevin Kilbane
The Tolton Ambassadors meet regularly to discuss their work to promote the cause for sainthood of Venerable Father Tolton.

Tanya Jones, treasurer, said being active with the group has made her more open, loving and accepting of all people, especially children in need and youngsters in need of a mother figure.

Wendy Summers, whose home parish is St. Pius X Parish in Granger, joined the Tolton Ambassador group at St. Augustine because she wants to be part of the movement promoting Father Tolton’s cause for sainthood. She discovered the movement while doing research to speak about African American candidates for sainthood at St. Pius X.

Her husband, James Summers, who is in formation to become a permanent deacon, said having an African American saint is important in evangelization.

Henley, the St. Augustine group’s co-treasurer, and Nora Belzowski, a member of the group’s website committee, both spoke of being inspired by Father Tolton’s faith journey. As an enslaved person and with the trauma he suffered, it is amazing he has become someone to emulate for African Americans at St. Augustine Parish.

Bishop Kevin C. Rhoades has been supportive of their efforts, members of the group said. The bishop even welcomed Saint Luke Productions to present the play “Tolton: From Slave to Priest” in 2018 at Saint Joseph High School in South Bend and Bishop Luers High School in Fort Wayne. 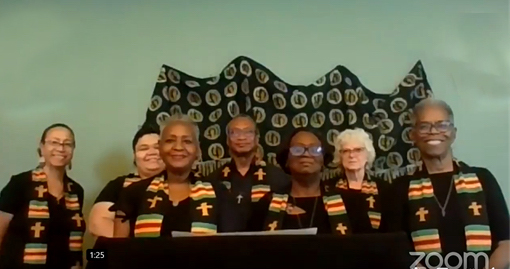 Provided by Deacon Mel Tardy
In July, members of the Tolton Ambassador Corps led the first two days of the virtual national Tolton Novena for the Spiritual Welfare of the Black American Community.

St. Augustine’s Tolton Ambassador group now wants to take the story of Father Tolton and his deep faith to people throughout the diocese. They said people can join in promoting the cause for Tolton’s sainthood in several ways:

• Pray for the development of devotions to Father Tolton.

• Pray the Tolton Prayer for a specific intention and do it on a regular basis. If a miracle is granted, you will be able to verify it was through prayer to Father Tolton for his intercession with God. The prayer is available at https://tolton.archchicago.org/prayer.

• Donate to his cause for sainthood through the Archdiocese of Chicago. Learn more at https://tolton.archchicago.org/the-cause/donate.

The story of Father Augustus Tolton’s life is one of perseverance and strong faith.

He was born into slavery April 1, 1854, in Brush Creek in south-central Missouri. His parents had been baptized Catholic, and they embraced the faith.

His father reportedly was killed fighting for the Union Army during the Civil War. In 1862, his mother escaped with her three children to freedom in Illinois, settling in Quincy in the west-central part of the state, said Deacon Mel Tardy of St. Augustine Parish’s Tolton Ambassador Corps. The Tolton family continued to practice their Catholic faith, and the future Father Tolton attended Catholic schools despite facing racial prejudice.

An Irish priest encouraged the young Tolton to consider a vocation to the priesthood, Tardy said. Priests and nuns helped tutor him to attend the seminary, but no Catholic seminary in America would admit him because of his race. He was allowed to enroll in 1878 at St. Francis Solanus College — now Quincy University — in Quincy, it says in a history of his life on tolton.archchicago.org, the Archdiocese of Chicago’s website devoted to his cause for sainthood. Tolton departed the university in 1880 when he was accepted to study at a seminary in Rome.

When Father Tolton was ordained a priest April 24, 1886, in Rome, he became what many people recognize as the first African American priest.

Father Tolton expected to be sent to serve in Africa, but instead he received an assignment to minister in Quincy, the archdiocese’s website said. He moved from Quincy in 1889 to serve African American Catholics in Chicago. Known for his preaching and singing, by 1891 he had started St. Monica Parish in Chicago to serve those families.

The Archdiocese of Chicago opened his cause for sainthood in 2010. In early 2012, the Vatican’s Sacred Congregation for Causes of Saints approved naming Father Tolton “Servant of God” and allowing the archdiocese to investigate his life for consideration for sainthood.

Pope Francis decreed in June 2019 that Father Tolton is deemed “Venerable.” The title “formally recognizes he lived the theological virtues of faith, hope and charity, and the cardinal virtues of prudence, justice, fortitude and temperance, at a heroic level,” the archdiocese said in a news release at the time.

Father Tolton will be declared “Blessed” if a miracle can be confirmed as resulting from his intercession with God. Following that declaration, proof of a second miracle through Father Tolton’s intercession would be needed for him to be canonized as a saint.