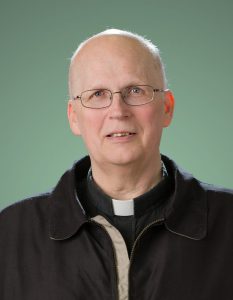 “God has a plan for everyone’s life,” explained Father Paul McCarthy, who will retire in June as pastor of St. Stanislaus Kostka Parish in New Carlisle. “When I felt His call strongly, I responded, ‘If that’s what I’m supposed to do, I’ll do it.’”

Father McCarthy first heard that call as a 12-year-old attending St. Therese, Little Flower Parish in South Bend. The oldest of nine children, he credits his parents’ devotion to the Holy Family as an important influence. Each of the eight boys has the middle name Joseph, and his sister’s name is Mary.

However, he didn’t enter the seminary until he was 28, after being drafted into the U.S. Navy. He worked his way through college by serving at restaurants and filling stations after attending Michigan colleges but eventually graduating from IUSB.

After being ordained in 1984, Father McCarthy served at St. Matthew Cathedral under Bishop Joseph Crowley. His other assignments have included St. Mary Parish, Huntington; St. Mary of the Assumption Parish, South Bend (which subsequently merged with St. Jude); and St. John the Baptist Parish, New Haven. Parishioners from those places still call or stop in to see how he’s doing, he said. He has been at St. Stanislaus Kostka for 13 years, where he is also much beloved.

Besides being active in the pro-life movement, Father McCarthy serves as chaplain for the Serra Club and the areawide Legion of Mary. The most satisfying aspect of his parish ministry in recent years, he said, has been visiting the homebound and those in care facilities, celebrating Mass weekly in nearby nursing homes. “It’s part of the living and dying process,” he said simply.

Each of his parishes has been blessed with a school. One of the most challenging things for Father McCarthy about overseeing a school, he said, has been school parents who aren’t engaged with their own faith. However, that point of frustration has been balanced by his work in preparation classes for the Rite of Christian Initiation of Adults with people eager to join the Church.

Recent health struggles have led to Father McCarthy’s retirement, but parish administrator Diane Oudhuis noted, “Pain never slows him down; he just keeps plugging away with a good sense of humor. I’ve learned so much from him about kindness, patience and compassion for others.”

She shared, “Father Paul was like a breath of fresh air to this parish … It didn’t remain quiet for very long after Father’s arrival. He brought parishioners together again and brought so many new faces and activities for the young and old to our parish. It was heartwarming. You can feel the love he has for the Church and his parishioners.”

While at his new home in residence at St. Elizabeth Ann Seton Parish in Fort Wayne, Father McCarthy plans to continue serving as much as he can. Hobbies that may occupy more of his time in retirement include coin collecting and following his favorite Chicago teams, the Bears and the White Sox.