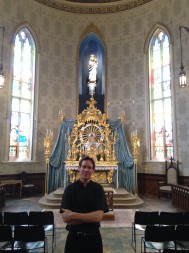 Father Michael Gaitley who wrote the book “33 Days to Morning Glory,” about the Marian Consecration.

WARSAW — Congregation of Marians of the Immaculate Conception priest Father Michael Gaitley, a prominent author, theologian and retreat leader best known for his book “33 Days to Morning Glory,” spoke to an assembly of priests and offered a personal interview on the purpose and meaning of consecrating oneself “to Jesus through Mary,” on Thursday, May 8, at Sacred Heart Parish in Warsaw.

Bishop Kevin C. Rhoades, who was in attendance for Father Gaitley’s speech, is planning to renew the consecration the Diocese of Fort Wayne-South Bend to the Blessed Mother on Aug. 15, the feast of the Assumption. Bishop Rhoades is encouraging all members of the diocese to complete Marian consecrations using the method of “33 Days to Morning Glory.”

St. Louis de Montfort formally established the most traditional method of Marian consecration, which seeks to bring men and women into deeper union with both Mary and Jesus. Father Gaitley explained, “St. Louis was the first to take all the threads of Marian consecration, popularize them and synthesize them. The way I look at it, ‘33 Days to Morning Glory’ is written in the same spirit, meant to combine and promote the main streams of Marian devotion that have come since St. Louis’ model. The way it is written also provides an easier to use and updated version from the traditional method.”

He elaborated, “It is easier because the traditional model uses lots of litanies and prayers that at times can distract or overwhelm the reader. This version actually has more prayer, but it involves heart-pondering prayer that reflects upon the various teachings of Marian consecration and how to incorporate them into daily life.”

This consecration seeks to engage all people, encompassing those at various stages of spirituality and theological knowledge. “Each day there is only a few pages reading, which allows for deeper reflection as you ponder the teachings of the saints, leading you to formally acknowledging and accepting Mary as your spiritual Mother. While it is true that she already is our spiritual Mother, in her gentleness, she does not force her spiritual maternity on us. We have to give her our ‘yes,’ and she knows what the power of a ‘yes’ can do. When we say ‘yes’ to her as our Mother, it unleashes the full power of her motherly care, mediation and tenderness in our lives.”

He continued, “According to St. Louis, total consecration to Mary is the quickest, easiest, surest way to holiness. While some might argue that there is no easy way to holiness, mothers have a way of making even the challenges of carrying the cross into something sweet. For example, when you have to take a bitter pill, your mother puts honey on it to make it taste better or when you scrape your knee, mothers kiss it to make it feel better.”

Father Gaitley describes his book as an updated version because “it takes the consecration and puts it squarely in the teaching of the mind of the Church.” In addition to incorporating the theology of St. Louis de Montfort, Father Gaitley dedicates weeklong meditations to the Marian thoughts of St. Maximilian Kolbe, Blessed Mother Teresa, and St. John Paul, followed by a summation and recapitulation of the month-long reflections. These additions include a more Scripturally based awareness of Mary as an instrument of God’s grace, who seeks to transfix the focus on Christ in order to come to a greater understanding of His thirst from the cross and on accepting His mercy.

He advocated completing the Marian consecration because it offers a profound understanding of how to address the desires of Christ and lovingly console His heart, which suffered so greatly through His passion and death.

“One of the best ways to console Jesus is to give yourself to Mary,” Father Gaitley said. “As He was dying on the cross, Jesus in His greatest agony gives us the first and best example of Marian consecration when He looks down and entrusts Mary and the beloved disciple to one another. He challenges all Christians to take up their own crosses after Him, and He wants for us no less consolation than He had in his moments of darkness, which is to have His mother as our spiritual mother and to formally accept this invitation of and take her into our home.”

Father Gaitley explains, “the consecration preparation begins 33 days before a major Marian feast day. It is such an important gift that you want to prepare properly, so when you offer the momentous gift of yourself to Jesus through Mary, it will be a day that you remember and celebrate with a special solemnity.”

While it is possible to complete the consecration on one’s own, ideally the best way to do it is as part of the Hearts Afire program, according to Father Gaitley, which includes a DVD set, retreat companion guide and group discussion manual.  “‘Where two or more are gathered in my name,’ Jesus says, ‘there I am in their midst.’ To walk this path with Jesus, actually present through the Body of Christ, or with other members of the Body of Christ in a small group at a parish setting, would be most fruitful.”

Father Gaitley concluded by synthesizing the overarching purpose to making a Marian consecration and placing it within the concept of missionary discipleship. “Mary brings us to a personal relationship with Jesus, Jesus then brings us to the Father and the Holy Spirit, and the Trinity in turn brings us closer to others. Transforming community with Christ is our goal, because when we enter into deeper intimacy with Christ we take on His heart and His thirst for souls.”