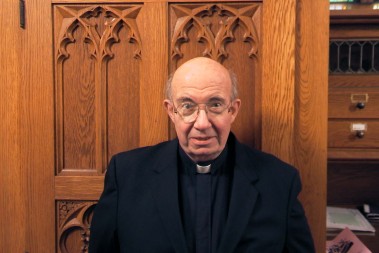 FORT WAYNE — Father Lawrence A. Kramer, retired diocesan priest of the Diocese of Fort Wayne-South Bend, died Jan. 23 while in Florida. He was 79.

Born in Fort Wayne to Lawrence and Etheldreda (Garty) Kramer, he grew up with a younger brother, Roger, who resides in California. His family belonged to the Cathedral of the Immaculate Conception. He attended Cathedral Grade School and Central Catholic High School in Fort Wayne.

In an article published by Today’s Catholic, Father Kramer described his call to the Priesthood: “About half way through my senior year at Central Catholic High School. I had ruled out the Priesthood as a freshman, convinced that I belonged in the lay apostolate. Suddenly I couldn’t see myself as anything but a parish priest. I immediately made a deal with God. I would assume this was what God wanted of me and not agonize over it and God would be gentle in getting me out of the preparation process if I was wrong. My only doubt was, at age 17, whether I would live long enough to be ordained!”

He attended Our Lady of the Lake Seminary, Wawasee, and St. Meinrad Seminary, St. Meinrad, and was ordained to the Priesthood on May 28, 1960 by Bishop Leo A. Pursley in the Cathedral of the Immaculate Conception.

Father Kramer was twice appointed a judge in the diocesan Tribunal and thrice served as an episcopal vicar in a Fort Wayne region of the diocese. He was appointed chaplain (1997), and assistant chaplain (2009) at Bishop Luers High School, Fort Wayne, and he served two, three-year terms on the Presbyteral Council.

“I never looked upon my priesthood as a job — it’s a lifestyle,” Father Kramer said. “I never had trouble moving from one job to another. They all fit the container.”

In retirement, Father Kramer was in residence as a senior priest at St. Elizabeth Ann Seton Parish, Fort Wayne.

In an interview with Today’s Catholic, Father Kramer said, “My favorite activity as a priest is the sacrament of Reconciliation. Unlike some, I find it to be alive and well, better in fact than in the days when people trooped to Confession in large numbers. Those who use this sacrament today understand it and appreciate it.”

Among the throngs who mourn Father Kramer’s passing is Sister Rose Clare Ehrlich, a Sister of St. Agnes, director of liturgy and music at St. Joseph, Bluffton, and St. Paul of the Cross in Columbia City. Sister Rose Clare, who worked with Father Kramer at both parishes for 10 years, says of her friend, “I found him one of the most gentle, caring, listening persons that I would ever want to work with. He was always there when you needed him.”

In a tribute to Father Kramer on his 50th jubilee in 2010 she wrote, “We treasure your mild manner, humility, gentle compassion, your ability to see the humor in situations and your Christ-like invitational leadership.”

Upon Father Kramer’s retirement over a year and a half ago, he relocated to Fort Wayne where he took an active role in ministry at St. Elizabeth Ann Seton Parish. Father Jim Shafer, pastor there, said of his friend, “More than any other priest I’ve met over my years, Father Larry had a very compassionate heart. He never met a person he turned away. … He was the most non-judgmental person I’ve ever met.”

Father Shafer noted that Father Kramer enjoyed conversing with the seminarians that visited or interned at the parish, saying, “He loved to share his wisdom.”

And on a personal note Father Shafer added, “He was a good friend with an absolutely delightful sense of humor. He was the king of one-liners. … He brought a lot of laughter to the rectory, a lot of good conversation. I do miss him already.”

Services for Father Kramer will be as follows: