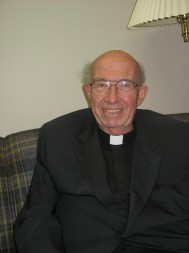 Father Lawrence A. Kramer, who most recently has served as pastor of St. Paul of the Cross Parish in Columbia City, will retire and reside at St. Elizabeth Ann Seton Parish in Fort Wayne, where he will serve as a senior priest.

COLUMBIA CITY — When Lawrence A. Kramer was in elementary school at the Cathedral of the Immaculate Conception, Fort Wayne, he doesn’t recall ever raising his hand when sister asked who was interested in a religious vocation. However, when the vocation did finally sprout, he said it was like “something out of Hollywood.”

Born in Fort Wayne to Lawrence and Etheldreda (Garty) Kramer, he grew up with a younger brother, Roger, now residing in California. While attending Central Catholic High School, Kramer was active in the glee club, the school newspaper and served as editor of the yearbook. He planned on having a career, getting married — even though he never dated — and being active in the Church as a lay person. At age 14, his concept of priestly life envisioned someone literally “tied to the sacristy” with occasional visits to the classroom, playground and parish picnics.

One evening following adult choir practice, while waiting for a bus on Calhoun Street, he noticed the store-front lighting behind him “playing on the front of the cathedral and the statue of Mary.” It dawned on him “that of all the occupations, the priest, vocation wise, could be all over the landscape and still be a priest. I couldn’t see myself being anything but a parish priest!” He prayed, “Oh God, I get it! I’ll take the steps needed. If I’m wrong, let me know!”

His only doubt was the eight years ahead of him. “Would I live long enough,” he thought.

Kramer spent those eight years at Our Lady of the Lake Seminary, Wawasee, and at St. Meinrad Seminary, St. Meinrad. He was ordained on May 28, 1960 — 52 years ago — by Bishop Leo A. Pursley in the Cathedral of the Immaculate Conception.

In 1969, Father Kramer was appointed chaplain of Catholic students attending Indiana Institute of Technology in Fort Wayne, an avocation for which he had been lobbying for some time.

“I’ve always been interested in youth,” Father Kramer related, “especially campus ministry at those commuter colleges with no religious affiliation.” When he was in South Bend he obtained a provisional teaching license and began teaching voluntarily at Saint Joseph’s High School. He enjoyed moderating panel discussions between boys and girls. “Many of the kids saw me coming,” he admitted, “but I think I got through to some of them.”

“I’d order a Coke, sit and read until a student approached to ask a question about course work or something,” he said.

Later, Father Kramer donned his collar, which prompted different questions, such as, “Do you know something about religion?” He always worked through a student organization. Father Kramer also visited faculty lounges and found he was accepted totally despite not having all the teaching credentials they had.

“My thinking regarding campus ministry was that God wanted it to happen and I wanted it to happen,” Father Kramer related. But Bishop Pursley said there was no money budgeted for it. Finally, Superintendent Father James Seculoff managed to fund the ministry in a dual role.

“I had one foot in a parish and the other foot in campus ministry,” he said.

Father Kramer was twice appointed a judge in the diocesan Tribunal and thrice served as an Episcopal vicar in a Fort Wayne region of the diocese. He was appointed chaplain (1997) and assistant chaplain (2009) at Bishop Luers High School, Fort Wayne, and he served two, three-year terms on the Presbyteral Council.

“I never looked upon my priesthood as a job — it’s a lifestyle,” Father Kramer said. “I never had trouble moving from one job to another. They all fit the container,” he joked. In retirement, if one can call it that, he plans to be an active, senior priest at St. Elizabeth Ann Seton, Fort Wayne.

He does have some health problems that he believes stem from an undiagnosed bout with polio when he was three years old. It’s left him with feet and lower-back problems. But, he is making some progress in turning some of the re-occurring symptoms around through treatments and exercise, especially swimming.

“I’ve always managed to find a swimming pool — a YWCA, YMCA or school facility — near where I was assigned,” he said. And there just happens to be a swimming pool across the street from his newly assigned parish.

Father Kramer has the beginning draft of a book in his head. “And with the assistance of Don Clemmer, it already has a title, ‘Think Like an Italian: A Catholic Priest’s Survival Guide.’”

“I’m only retiring from administration work. I can’t stop being a priest,” he concluded.