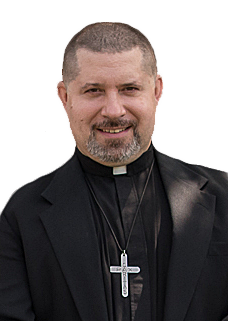 Father Jack Overmyer’s call to the priesthood began in high school and flourished near the end of his college experience. He was an altar server through ninth grade, mostly to help him focus on the Mass. Once in college, his steady girlfriend at the time suggested that they become more involved in the Catholic Church if they wanted to raise a Catholic family someday. He agreed and became a lector for the parish at Purdue University.

Being a lector gave him a visible presence in front of fellow parishioners. One day, someone from the parish asked him to be a RCIA sponsor for an adult who wanted to join the Catholic Church at Easter time. Father Overmyer was the sixth child of ten from what he calls “an average Catholic family” that attended Mass every Sunday, with more devotions taking place during Lent and Advent in the home. He said that he never heard about people joining the Catholic Church as adults and he was intrigued by the experience.

He and his girlfriend broke off the relationship shortly before graduation. Father Overmyer felt that this gave him the freedom to explore the priesthood.

While he was discerning the possibility of going to the seminary and the priesthood, he worked for a year and a half as a software engineer. He continued meeting with the vocations director and talking with his spiritual advisor. Two days after being laid off from the consulting company he worked for, Father Overmyer received a letter from then-Bishop John M. D’Arcy saying that he was given permission to attend St. John’s Seminary in Boston, Massachusetts.

Seminary always seemed like a good fit. Father Overmyer said that he received several “small affirmations,” such as yearly reviews which seem to indicate that he was on the right path. The classes in seminary and his summer assignments were fairly easy. He said it was “smooth sailing.”

Father Overmyer’s first assignment after his ordination to the priesthood in the fall of 1997 was to St. Elizabeth Ann Seton Parish in Fort Wayne. He served at the parish for about three years, where his task was youth ministry. “It was encouraging to see teenagers committed to growth and their spiritual life during my time there,” Father Overmyer recalled.

He was then assigned to the role of Pastor at St. Vincent de Paul Parish in Elkhart. This was a challenging assignment over five years due to health issues. It was a very busy parish with eight Masses to celebrate every weekend and two priests to share the load.

From Elkhart, Father Overmyer was assigned to St. Patrick Parish in Fort Wayne as Pastor for the next year and a half. He felt bad about his short assignment at St. Patrick because the parishioners had weathered so many transitions with pastors in the previous five to six years, but Father Overmyer’s health necessitated a change.

After consulting with him and his doctors, Bishop D’Arcy decided that Father Overmyer would assume the role of chaplain at St. Anne Communities retirement home in Fort Wayne. Regarding the swift transition, Father Overmyer said, “Transitions are never easy, but I made a promise of obedience to the bishop. Obedience is an act of hope and faith in the Father’s providence. The parish is God’s. God takes care of the parish, not me.”

Since 2007, Father Overmyer has taken care of the spiritual and sacramental needs of each of the 180 residents at St. Anne’s whom he tries to visit every other week. Residents seem to “appreciate that the presence of the Eucharist creates a radically different environment here.” according to Father Overmyer. He also said that the presence of Christ creates “a more spiritual, faith-centered environment.”

He is available to hear confessions, prays the rosary with residents on Mondays, leads a Bible study once or twice a month and helps to bring residents to and from the chapel for Mass. He is often asked to administer anointing of the sick and preside at some residents’ funerals. He is grateful that he can be available to the elderly people who need his aid and be Christ’s presence to them, especially in their struggles. Father Overmyer also prays for the Diocese of Fort Wayne-South Bend as well as the needs of the world.