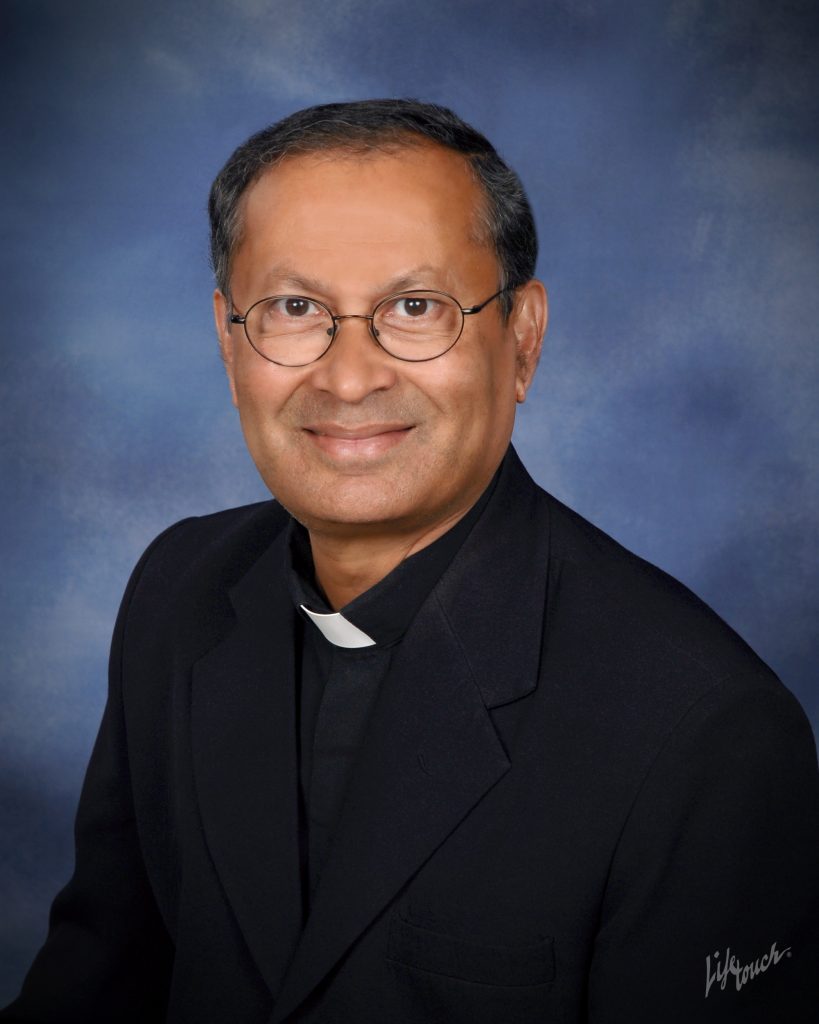 Much of Father Fernandes’ work in India involved starting and running Catholic schools. Although these schools are staffed by the Church, the government is heavily involved in finances and administration. One government regulation is that no one over the age of 60 can work in a school. Having passed this milestone influenced Father Fernandes’ decision.

Father Fernandes recently returned from a visit to his parents in India’s Karnataka state, a region with a Catholic heritage dating back to St. Francis Xavier. At 96 and 89, they are living in their own home with help from Father Fernandes and his six siblings. If the priest’s own health permits, he said he would be happy to eventually retire in India and continue ministering as he is able.

The young Fernandes was surrounded by good examples, including an uncle who was a priest and innumerable religious sisters in his extended family. The youth worked as cook for his parish priest, whose compassion strongly influenced him. This pastor always had a drink for a stranger at the door, he said, hot or cold — depending on the season.

As the eldest son, he was expected to support his parents, so he enrolled in engineering school at age 16. But after only a few days he decided he didn’t like the atmosphere there, so he pursued a religious vocation instead. Priests were so plentiful in Karnataka that he decided to become a missionary priest in northern India, where there was poorer education and greater poverty. His father allowed him to decide his own future, but his mother didn’t become reconciled to the idea until after he was ordained and she observed the fruit of his ministry.

After being ordained at age 27, Father Fernandes’ Jesuit bishop gave him joint assignments, simultaneously ministering in a parish and a school. At St. Xavier’s School in Chaibasa he was the first priest-principal. Classes were in Hindi, which Father Fernandes speaks but doesn’t write very well.

An ongoing challenge was turning away students who wanted to attend the excellent schools in which he taught and served as principal. Most of these families weren’t Christian but valued the fine education and values. He wound up founding many more schools and eventually filled a new diocesan role as secretary of education. “When you educate one child in India,” he explained, “you put food on the table for a whole family.”

In addition to his roles in parishes and schools, Father Fernandes was president of Samajik Samanway Samiti, an organization of 36 nongovernmental organizations trying to uplift the poor, as well as a sports association and a district cultural celebration of tribal feasts.

When he was diagnosed with diabetes, Father Fernandes was told by his bishop he needed to take a year-long sabbatical. But where, he wondered? His friend Father Lourdino Fernandes (not a relative) told him the Diocese of Fort Wayne-South Bend needed priests.

Bishop John M. D’Arcy welcomed Father Cyril and assigned him to pastor St. Patrick in Arcola while he worked on a master’s degree in education from Indiana University-Purdue University Fort Wayne. His two years there stretched into eight, then he became pastor of St. John the Baptist Parish, Fort Wayne. He was glad to be back in a parish with a school, he said, and he joked that Bishop D’Arcy, who often attended Mass there, was his associate pastor.

Since 2013 Father Cyril has served as pastor of St. Patrick and St. Hedwig in South Bend. Along the way he earned a doctorate in school administration from Concordia University in Portland, Oregon, which has a flexible program for remote students.

“I like to keep busy,” Father Cyril admitted. “Every day is a learning day for me.” He also expressed appreciation for his parochial vicar, Father David Kashangaki, CSC, his supportive staff and for active parishioners who show up when there’s a special event or work to be done.