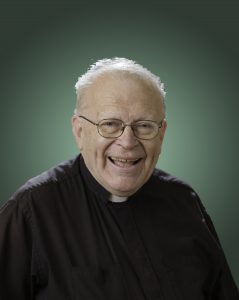 Celebrating his golden jubilee as a priest of the Diocese of Fort Wayne-South Bend is Father Daniel Durkin. And although he is now retired from active ministry, after those 50 years, Father Durkin said he intends to look for ways in which he can continue to serve those seeking to grow in their relationship with Christ.

His formation for the priesthood began at Our Lady of the Lake Seminary, which formerly stood on the shore of Lake Wawasee in Syracuse and served to prepare high school-aged young men for ministry. After graduation he attended Saint Gregory’s Seminary in Cincinnati, Ohio, and finished his formal education at Mount St. Mary’s Seminary in Emmitsburg, Maryland. His ordination took place May 26, 1973.

His first parish assignment was to Queen of Angels Parish, Fort Wayne, while he was a deacon. There, he said, he learned from the examples of Father David Carkenord and Msgr. William Faber.

Holy Family Parish in South Bend was his first post-ordination assignment. It was followed by St. Jude Parish, also in South Bend, where Father Durkin said he had the privilege to serve with Father Ed Narcovich.  “I learned much of what I know about being a priest from Father Ed,” he remembered.

The first time he pastored a parish was at St. Joseph and St. Catherine in Roanoke. “It was during my time in Roanoke that I worked with Msgr. Robert Schulte to create the training program for the permanent diaconate ministry in the diocese,” Father Durkin said. “Later, I made sure that St. Joseph and St. Catherine were among the first parishes in the diocese to institute the Christ Renews His Parish Program.”

At his next assignment, St. Mary of the Assumption Parish in Avilla, a welcome challenge presented itself: St. Mary had a parish school that was exceeding its capacity. Father Durkin oversaw the construction of an expansion to the school to address the need.

His most recent assignment was as pastor of St. Henry and Sacred Heart parishes, until Sacred Heart was designated a personal parish at which the Latin Mass was celebrated.

“I was especially pleased to be pastor of Sacred Heart Parish, since it was started by my uncle, Msgr. Durkin, in 1947,” Father Durkin said.

“Being the last parish I served at as pastor, St. Henry is also special to me. During my time at St. Henry the parish gardens, greenhouse and thrift center were opened. Through these ministries the parish is able to reach out in to the community and bring Christ to the people as their corporal needs are met.”

During his six months of retirement, Father Durkin has spent time with family members and friends in the Fort Wayne area. He said he has also reflected extensively on his years of ministry and those whom he helped to be able to serve and to grow in their relationship with Christ. He feels fulfilled in his contributions, he said, and hopes to continue contributing in whatever way possible, wherever there is a need.