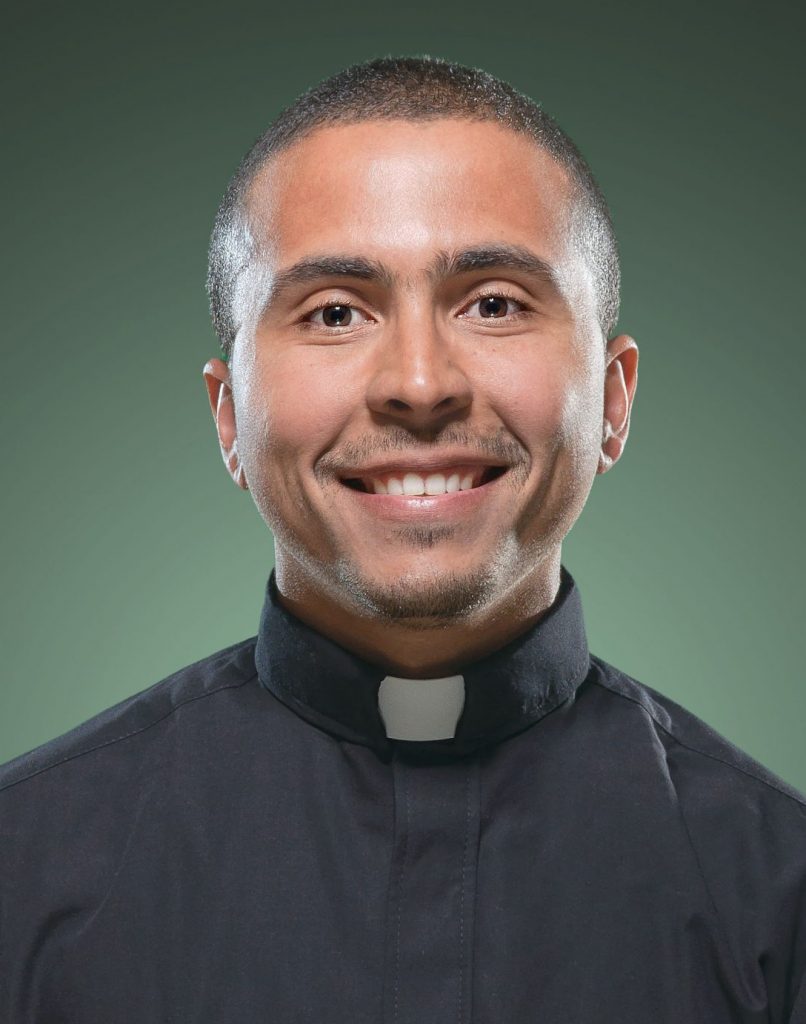 Since his youth, Father José Emmanuel Arroyo Acevedo has been seeking to follow the Lord in a unique way. Since 2019, he has served as the parochial vicar at St. John the Evangelist Parish in Goshen, helping bring the Gospel to families through sacramental ministry, personal outreach and social media evangelization. His journey now begins a new chapter, however, as he returns to his home of Puerto Rico to discern entering religious life as a Capuchin Franciscan. 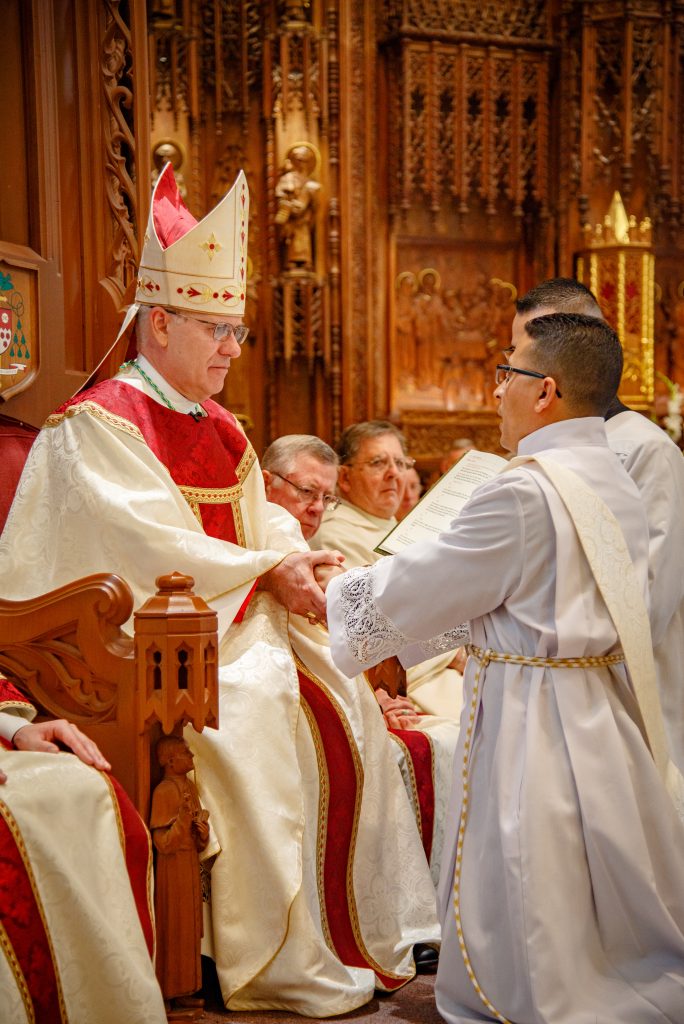 Nate Proulx
Father José Arroyo Acevedo is pictured during his ordination to the priesthood by Bishop Kevin C. Rhoades in 2019. Father Arroyo Acevedo will depart the Diocese of Fort Wayne-South Bend for home this summer to spend time in discernment with a Capuchin order of Franciscans.

It was in the grace-filled Jubilee Year of 2000, announced by St. Pope John Paul II, that Father Arroyo Acevedo first witnessed religious life in Puerto Rico and learned about the story of Franciscan priest Blessed Solanus Casey. Father Arroyo Acevedo shared, “my home parish of San Jose, in Luquillo, Puerto Rico had religious sisters working and serving there. Their joy and love for God and His people was beautiful and attractive.” When Father Arroyo Acevedo was 17 years old, he met and discerned with the Capuchin Franciscans, the community which Blessed Father Casey belonged to during his life. Shortly after this, Father Arroyo Acevedo learned about the Franciscan Friars of the Renewal in New York and was able to make a visit right after Father Benedict Groschel, one of the CFR founders, had been in a car accident. As a 19-year-old, Father Arroyo Acevedo was given permission to spend the year caring for Father Groschel and living at their retreat house. From this experience he has many fond memories and is very grateful for the countless hours spent with such a wise, holy and generous priest.

Following that year, Father Arroyo Acevedo returned to Puerto Rico to formally enter the Capuchins as a postulant. However, during this discernment experience and in realizing how deeply the time in New York deeply impacted his heart, he did not petition to enter the Capuchin novitiate, but instead made the decision to inquire about joining the CFRs. He was accepted by the Friars of the Renewal and spent five years in formation with them. During his temporary vows, however, he noticed an increasingly prevalent lack of peace and joy when he prayed about committing to them for life. Through discernment with superiors, he left the CFRs and was later approved to enter the Archdiocese of New York to continue as a seminarian, undertaking studies in philosophy and theology.

Yet, the pull to religious life never fully went away for Father Arroyo Acevedo. Before he was ordained to the diaconate for New York, he was given permission to again explore a Franciscan vocation, which led him to Fort Wayne and the Franciscan Friars Minor. After receiving approval from Bishop Kevin C. Rhoades to join, he entered as a postulant and was assigned to the friary in Huntington, the same religious house that Father Solanus Casey had lived in for 10 years. When the community experienced significant changes in leadership and direction, Father Arroyo Acevedo spoke with Bishop Rhoades about continuing to serve the diocese as a seminarian instead. Bishop Rhoades agreed, and even envisioned a potential pathway for Father Arroyo Acevedo to rejoin the friars after his priestly ordination. When the friars disbanded in 2020, Father Arroyo Acevedo continued to pray about fulfilling the persistent longing on his heart to follow the Lord, not only as a priest, but also in the evangelical counsels of poverty, chastity and obedience. 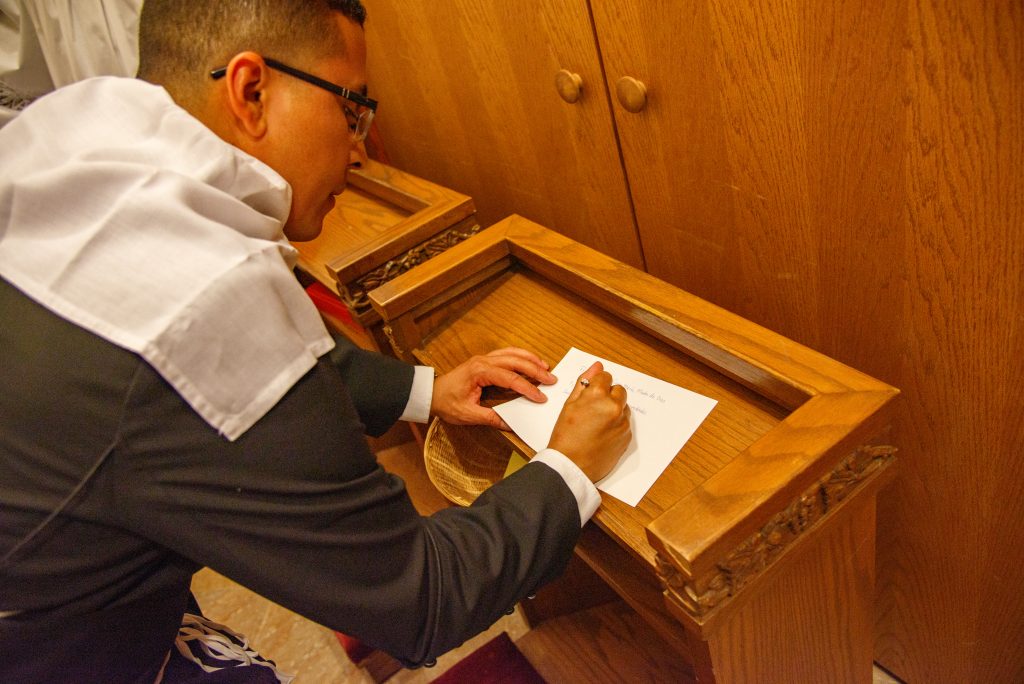 Nate Proulx
Father Arroyo Acevedo writes out a supplication to Mary during his priestly ordination.

Father Arroyo Acevedo requested to return to religious life once more, seeking to embrace a year of service and discernment with the Capuchins in Puerto Rico. He has been given permission to return to his home diocese of Mayagüez, where he was baptized, bringing him closer to family and allowing him to serve a land in great need of more priests. He will remain incardinated in the Diocese of Fort Wayne-South Bend during his new Franciscan formation over the next five years and will at the end of that time have the decision to either return to ministry in Indiana or profess final vows as a Capuchin in Puerto Rico.

Speaking about his time in the Diocese of Fort Wayne-South Bend, Father Arroyo Acevedo shared “it has been an honor, a privilege, and a blessing to know and serve the people of St. John the Evangelist parish. I am very grateful to Bishop Rhoades, the diocese here, and to St. John’s pastor Father Royce Gregerson, who has provided the foundation for my priesthood and given me a deeper appreciation of the liturgy. I will continue to pray for those in Fort Wayne-South Bend and ask their prayers for me as well!”

For anyone who wishes to maintain correspondence with Father Arroyo Acevedo, he will have access to his TikTok, Facebook and YouTube accounts for the next year. Written letters can be mailed to: Padre José Emmanuel Arroyo Acevedo, Urb. Lomas de Luquillo EU-9 Calle E-14, Luquillo, Puerto Rico 00773.