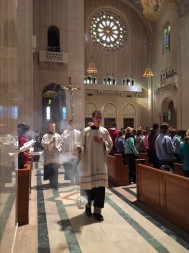 WASHINGTON — With enthusiasm and hope, individuals from throughout the Diocese of Fort Wayne-South Bend united their voices and footsteps on Jan. 22 with hundreds of thousands in support of the protection of life from conception to natural death. Five hundred students from the diocese joined nearly 700 more from the University of Notre Dame, Saint Mary’s and Holy Cross College, and endured the more than 12-hour journey to the nation’s capital with a combined 25 buses to stand in solidarity in defense of life.

On the morning of the march, Masses sponsored by the Archdiocese of Washington were offered at both the Verizon Center and the D.C. Armory. At the armory, where Bishop Kevin C. Rhoades served as concelebrant, Cardinal Daniel DiNardo of Galveston-Houston exclaimed, “How beautiful it is to see so many young people saying ‘yes’ to life!”

These young pilgrims then ventured to the National Mall, joining with an estimated 500,000 supporters to hear words of encouragement from various pro-life leaders on keeping the energy and spirit of life alive beyond the march. Speakers included Archbishop Joseph Kurtz, president of the USCCB, Carl Anderson, Supreme Knight of the Knights of Columbus, Congressional members from both parties and Rev. Sammy Rodriguez of the National Hispanic Christian Leadership Conference, who offered the concluding prayer for the rally.

Pro-life defenders of all ages then began the walk to the United States Supreme Court building, where in 1973, the Court decision on Roe v. Wade declaring abortion legal has since led to the death of over 50 million unborn children. These supporters marched together triumphantly, demonstrating their advocacy for those without a voice of their own.

Some spoke of their amazement at the response of so many committed participants. Kathy Heckber, a parishioner of St. Aloysius, Yoder, shared her thoughts on the event. “Thousands of people marched with signs defending life. Many were praying, singing and chanting as they walked,” she said. “I was really impressed to see so many young adults. Seeing them gives me hope that one day this will end.”

Many students spoke of their excitement and gratitude for having been able to take part in the march.

Emma Rotkis, a junior at Saint Joseph High School, South Bend,  on her third March for Life shared, “It is inspiring to see so many people giving voices to those who have none. It is even more moving when you realize that some of the loudest voices come from the hearts of our young generation.”

Hannah Toepp, a freshman at Marian High School in Mishawaka, revealed, “My experience on the March for Life was extremely prayerful and spiritually involved. We were elbow to elbow singing and praying the rosary along the way to show the world our support for life.”

Emma Gettinger, a Marian senior, added, “It was awesome to have the experience to see so many others excited about their faith.”

Claire, a parishioner from Immaculate Conception, Auburn, said, “The thing that stood out to me the most was the joy of everyone. It was a totally somber occasion, but at the same time it is like a big Catholic family reunion; everyone just has so much joy and hope that we can end this terrible problem.”

Young parishioners of St. Paul of the Cross, Columbia City, added their thoughts as well.

“It was pretty cool how everyone came together in a peaceful protest, essentially taking over the whole street but in a very friendly way, uniting with people across the country for such a great cause. It was also interesting to see former rape victims and those who shared that they regretted their abortions.” Stacey Quinn said. “It’s just so powerful, it brings tears to my eyes, seeing everyone bravely stand and talk about how they are against this huge issue and how much we just need it to stop.”

Afterwards, students from the diocese returned to their temporary parish accommodations for an evening of community and reflection as they shared pizza and gathered in the churches of St. James and St. Ann to hear speeches on forgiveness, mercy and renewal. Reconciliation services accompanied by praise and worship music were offered during Eucharistic Adoration for both diocesan groups. Father Andrew Budzinski, vocation director, led those from Fort Wayne, and Franciscan Father David Mary Engo spoke to those from South Bend.

Towards the end of the prayers, Father Engo invited all those present who were open to discerning a vocation to the religious life or Priesthood to come up and pray in front of the Blessed Sacrament. Fifteen young men and women bravely knelt before Christ in the Eucharist as Father Engo led the group in praying for them, emphasizing the importance of showing support for those who are open to following God’s will in their lives.

Brianna Strong, a parishioner of St. Gaspar, Rome City, was one who responded to this invitation.

She shared, “I always have the thought in the back of my mind of Jesus calling me to join the religious life, but sometimes as a teenager, we have the struggles to want to plan and control our life, which can get in the way of what God wants us to do.”

Strong, who has been discerning throughout the last year, further shared that she has received “great support and advice from the Sisters of Perpetual Adoration (Mishawaka) and Franciscan Friars Minor in discerning what God is asking. I keep praying to discover where He will lead me.”

On Jan. 23, Bishop Rhoades celebrated Mass at the Basilica of the National Shrine of the Immaculate Conception. While this Mass had originally been scheduled primarily for those who had traveled from his diocese, it instead became another example of Catholic unity and shared participation in the life of the Church as diocesan groups from New Orleans, Louisiana, Nashville and Knoxville, Tennessee, Jackson, Mississippi, Sioux Falls, South Dakota, and Ogdensburg, New York, attended as well.

The amount of participation surprised even Bishop Rhoades, who exclaimed, “I was planning to celebrate Mass for 500 people, not 5,000!” He expressed his gratefulness for their attendance and his joy that so many were able to partake in the Mass together.

Afterwards, students from the diocese shared their joy at being able to participate in such a unique event.

David Kelty, a senior at Bishop Dwenger High School, Fort Wayne, who carried the processional cross as altar server, exclaimed, “How often do you get to serve at the national shrine with Bishop Kevin Rhoades? It was a privilege I will never forget. Serving Mass is a humbling experience on its own. When you add the beautiful basilica with our bishop in the context of the pro-life mission, it was exhilarating!”

Karena Parish, also a senior at Bishop Dwenger, enthusiastically remarked, “seeing all those priests and people at Mass just fills me with joy. It makes me feel like our faith is so much bigger and more incredible than ever before. It was also hard not to get distracted by the church’s beauty. Then after Mass, seeing men and women in religious orders, some of which I didn’t even know existed until today — these are the most joyful people I’ve ever met. They are such a witness of holiness!”

Before returning to Indiana, students also were able to travel to Mount Saint Mary’s Seminary in Emmittsburg, Maryland, to visit those from the Diocese of Fort Wayne-South Bend who are studying for the Priesthood.