The novel coronavirus. For two months, it has held back the world. Even to those who were passed over by the deadliest effects of the pandemic, the suspension of public Masses, other sacraments and devotions caused spiritual discomfort. Many felt cut off from their normal relationship with the Lord — removed from His presence and His graces.

On Palm Sunday, as the potential for a drastically altered Holy Week loomed, Pope Francis acknowledged the disorienting and sudden lack of spiritual normality that occurred in the Church throughout the world.

“Today, in the tragedy of a pandemic, in the face of the many false securities that have now crumbled, in the face of so many hopes betrayed, in the sense of abandonment that weighs upon our hearts, Jesus says to each one of us, ‘Courage, open your heart to my love. You will feel the consolation of God who sustains you,’” he said in a nearly empty St. Peter’s Basilica to an attentive and multitudinous virtual audience. 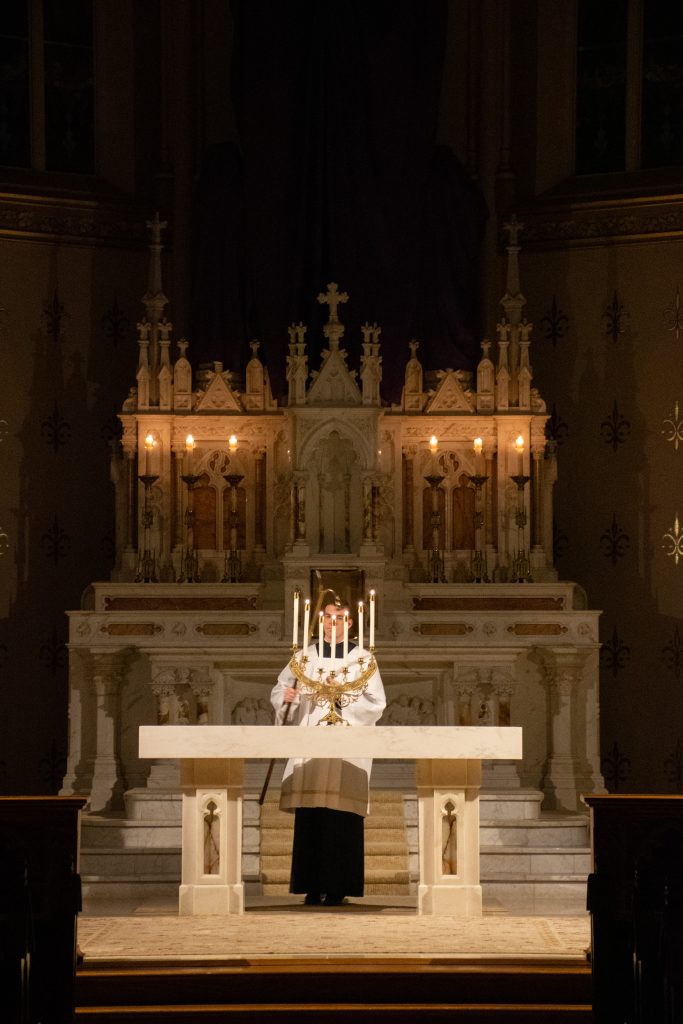 He went on that day to tell Catholics around the world:  “Inspired by the Lord’s example of love and service despite the cost, the faithful are also called to “refuse to betray him for whom we were created and not abandon what really matters in our lives.”

“We were put in this world to love him and our neighbors,” the pope said. “Everything else passes away; only this remains.”

“The tragedy we are experiencing summons us to take seriously the things that are serious and not to be caught up in those that matter less; to rediscover that life is of no use if not used to serve others,” he said. “For life is measured by love.”

Catholic News Service reported last month that many of the faithful feel the pandemic forced them to sacrifice more than they ever had throughout the liturgical season of Lent and beyond. But in the Diocese of Fort Wayne-South Bend, during the time of sacrifice, faith grew in ways it would not have, had it not been challenged by lockdowns and stay-at-home orders. 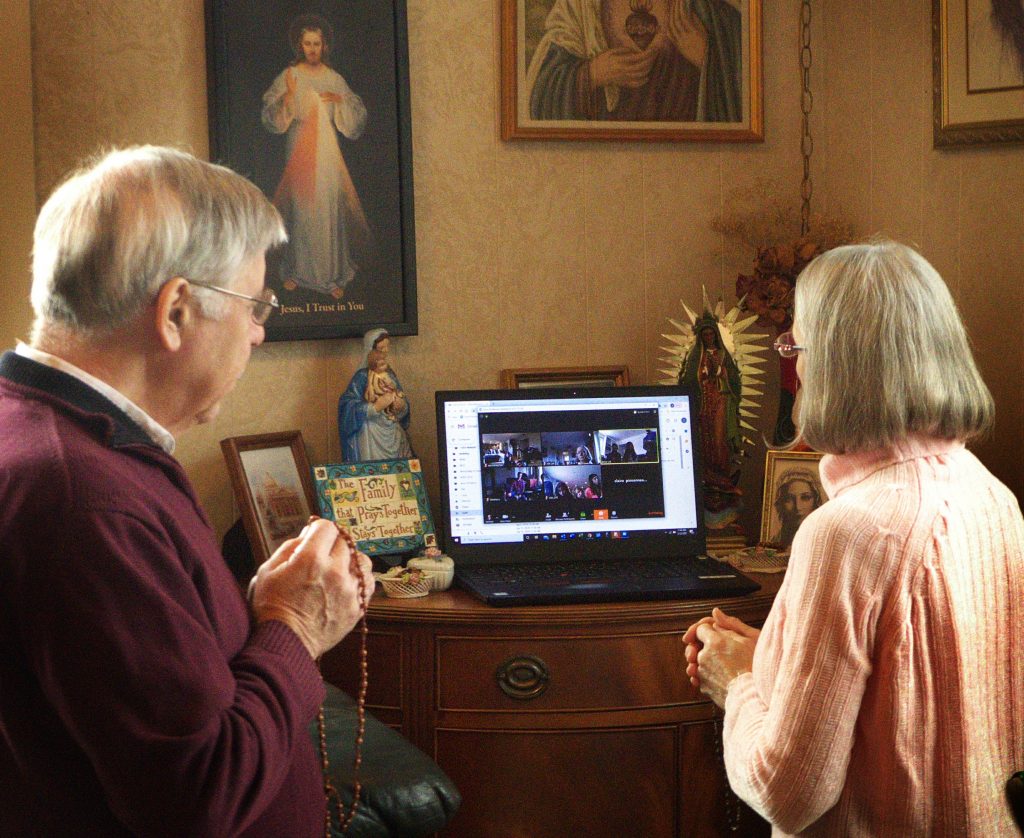 Bob List
Bob and Ida List of Warsaw pray the rosary along with their family on Sunday via Zoom. The couple said they felt blessed to have the digital capability to stay connected and share the love of Mary and her Son during this time of challenges.

Families brought the Mass into their homes, prayed the rosary around the fireplace and initiated spiritual discussions. Shrines and prayer spaces sprang up in homes, parents became religious education teachers and rosaries were said on the couch, the home office and the living room floor. Masses were celebrated before empty churches but packed computer, tablet, TV and phone screens.

As they always do, the works of mercy managed to be lived by those called to be disciples in charity. With caution, schools, food pantries, St. Vincent de Paul societies and Catholic Charities worked nearly around the clock to provide for the physical needs of those who were out of work. The young and old reached out to each other to check on their welfare and spirits. 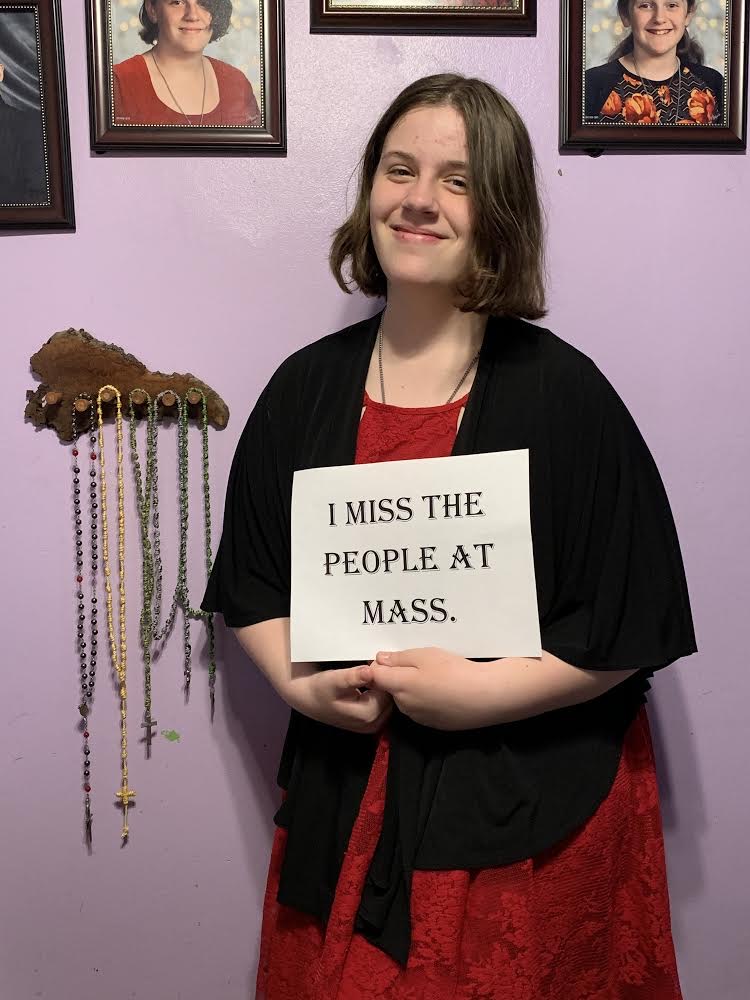 Provided by Jennifer Engquist
Emma Engquist quarantines at home, waiting for the day she can return to Mass at St. Elizabeth Ann Seton Parish, Fort Wayne.

It has already been asserted that as the privileges of publicly practicing the Catholic faith begin to return, the things learned in the meantime perhaps should not be discarded for a return to normalcy.

“It has been beautiful for me to see our spiritual solidarity during this pandemic,” Bishop Rhoades said in his letter to the faithful last week outlining the resumption of public Masses. Noting the patience, cooperation and sacrifice that has been required and that will continue to be required, he prayed for the intercession of the Blessed Virgin Mary as the diocese follows a roadmap to a “safer earthly situation, and, even more importantly, as we strive to follow the roadmap to the safety and joy of heaven.” 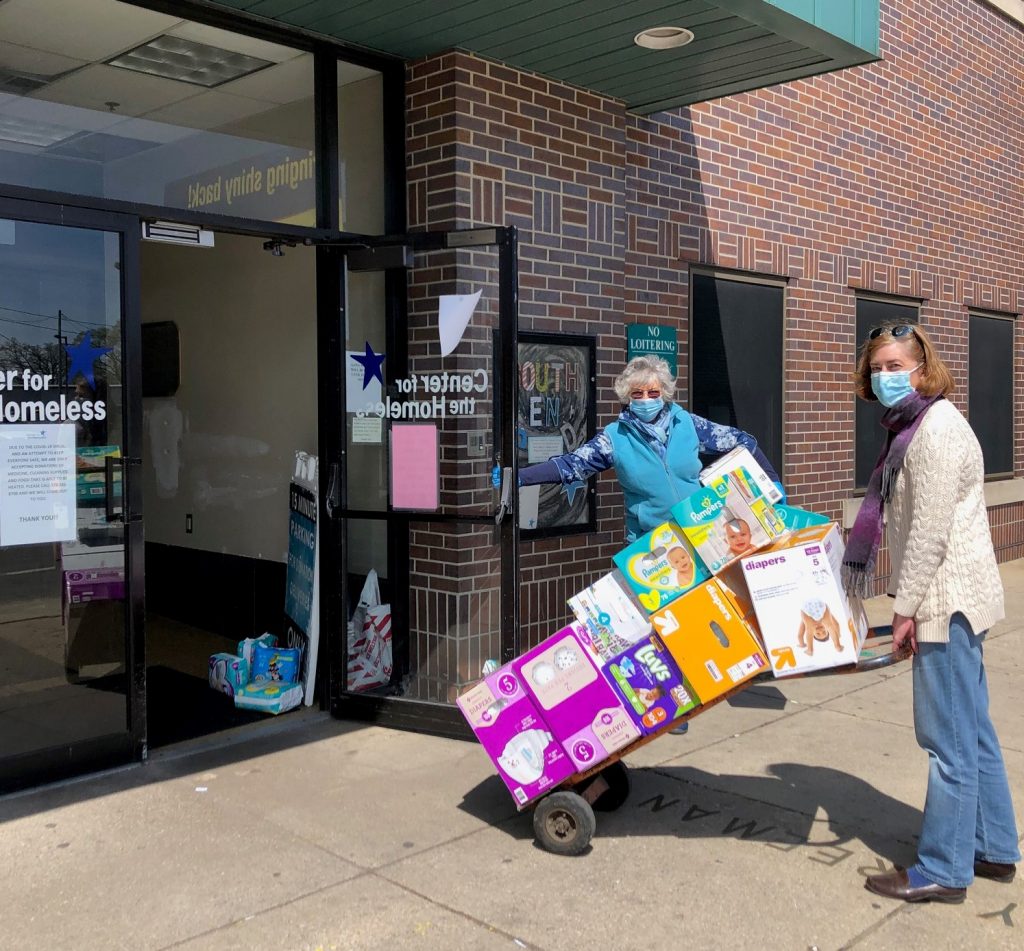 Provided by Beth Barrett
Members of the Christ Child Society of South Bend deliver diapers collected during a drive to the South Bend Center for the Homeless to meet an increased demand. 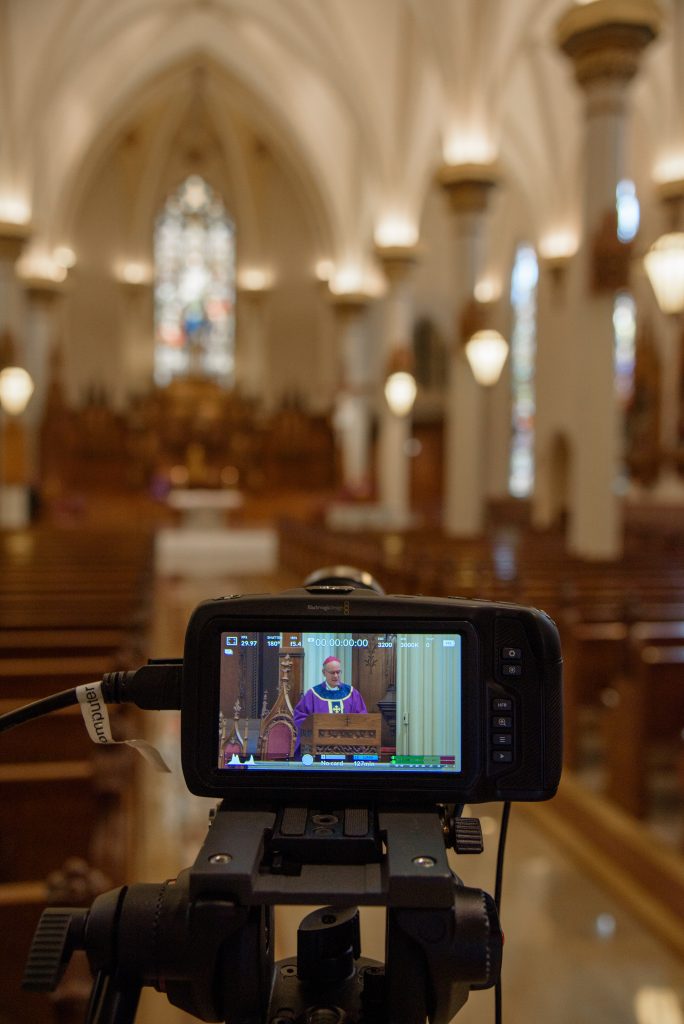 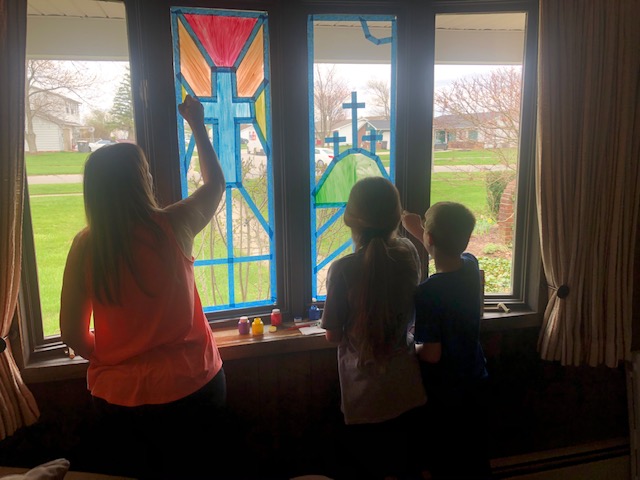 Provided by Kim Bentley
The Bentley family of Fort Wayne shares hope and shows support for their neighbors by decorating the windows of their home.

John Martin
The vicars forane concelebrate the Chrism Mass April 9 at the Cathedral of the Immaculate Conception. 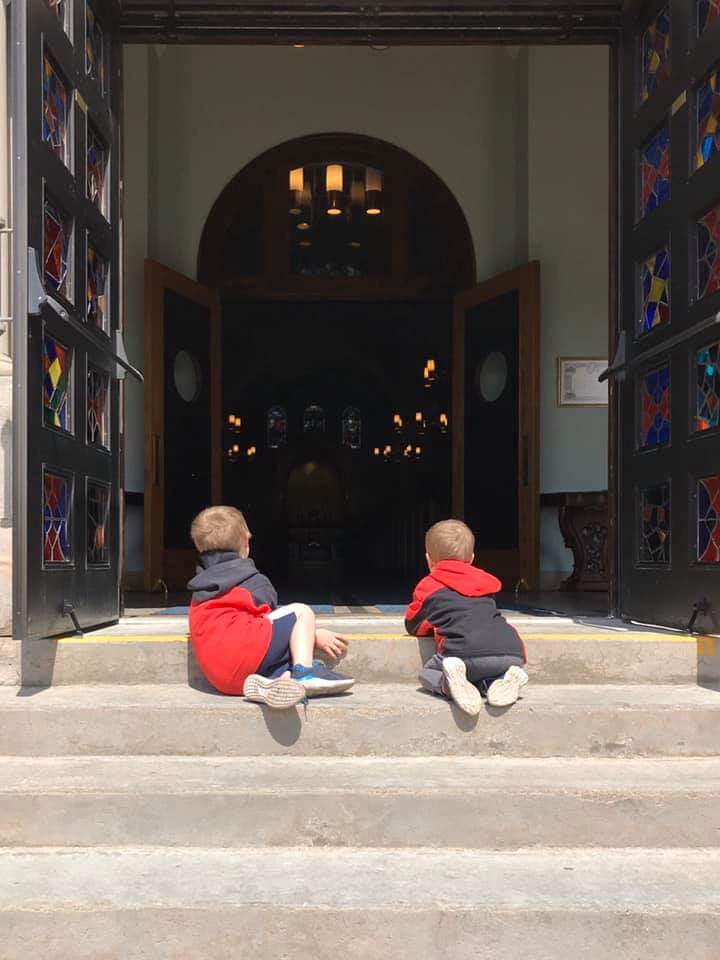 Molly Wynen
Two boys climb the steps of St. Monica Church, Mishawka, to gaze inside from a distance. “Let the little children come to me, and do not hinder them, for the kingdom of heaven belongs to such as these.” (Matthew 19:14)