Margaret Mary McMurtry remembers being “terrified” when she started school at University of Saint Francis in Fort Wayne.

McMurtry had spent her freshman year at St. Joseph’s College in Rensselaer. After that college closed in May 2017, she transferred as a sophomore to USF. During that process, she met Sister M. Elise Kriss, USF’s president.

“I remember feeling new and that I did not know anyone, but I knew the university president,” recalled McMurtry, who graduated from USF this spring with bachelor’s degrees in both psychology and health and exercise science.

“She really is just a servant,” McMurtry noted. “She puts her whole self into anything she does,” whether it’s for students, staff or the community.

Sister Elise will retire June 30 after 27 years as USF’s president. She hopes that won’t be the end of her service there. 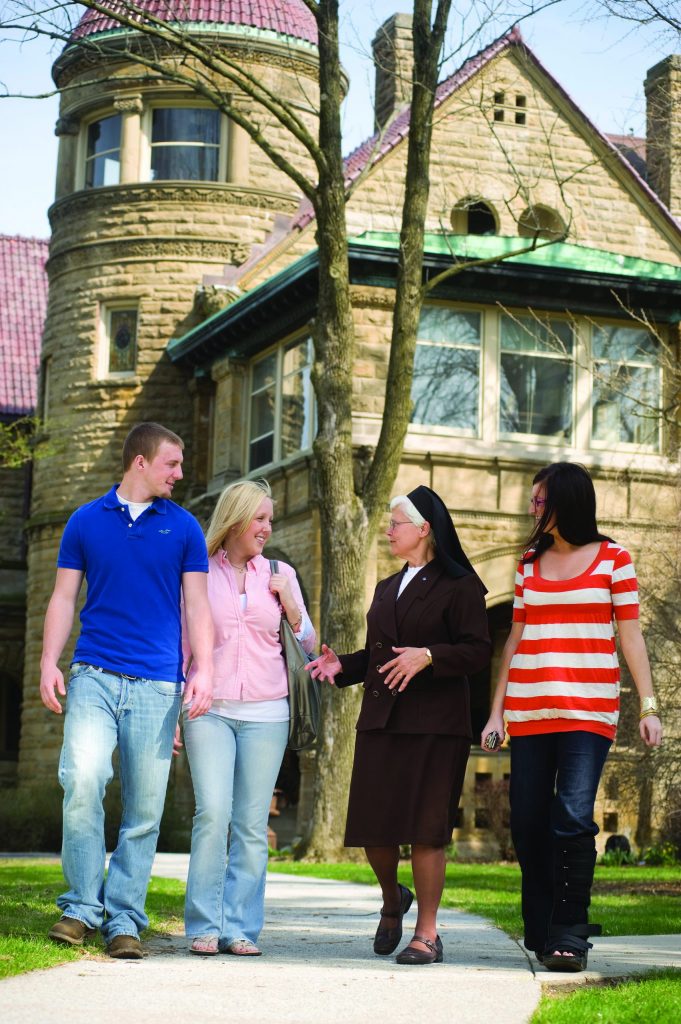 Through life and her approximately 40 years at the university as student, administrator and president, she has been guided by her Catholic faith and the Franciscan values of her religious order, the Sisters of St. Francis of Perpetual Adoration in Mishawaka.

Franciscan values include respecting the unique dignity of each person, encouraging a prayerful community of learners, and serving each other, society and the Catholic Church. The values also include working for peace and justice and respecting God’s creation.

Those values have been part of her life since early childhood. 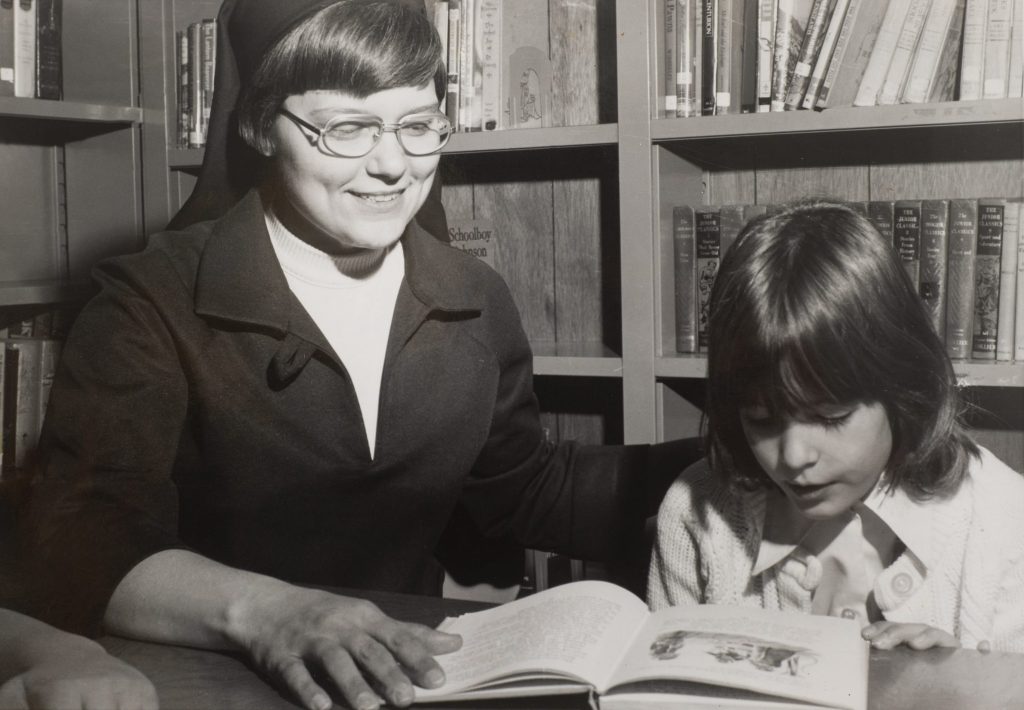 Sister Elise taught and served as a principal in elementary grades for 12 years before joining what is now University of Saint Francis in 1983 as an undergraduate dean.

While growing up in North Judson, her family attended Sts. Cyril and Methodius Parish near their home. Members of the Sisters of St. Francis of Perpetual Adoration taught at the parish’s school, where Sister Elise attended for grades 1 through 8.

“It was during that time I got to know the sisters,” she recalled. “Since we lived so close, I did spend a lot of time there helping the sisters.”

During her first three years in the order, she lived at the provincial house in Mishawaka but took philosophy, theology, math and other courses through the sisters’ college in Fort Wayne, which then was known as Saint Francis College.

Sister Elise chose a career in education for two reasons: Growing up, she knew the Sisters of St. Francis as teachers. The year she graduated from high school, the sisters also helped her get a summer job working in the emergency room and in admitting at the hospital their order operated in Michigan City.

“That kind of cured me of wanting to work in health care,” Sister Elise said, smiling.

She began by teaching in grades 5-8 for eight years, including at least a year at St. Therese School in Fort Wayne.

After four years as an elementary school principal in northwest Indiana, her superior at the Sisters of St. Francis asked her to join Saint Francis College in 1983 as an undergraduate dean. That role evolved over eight years to academic vice president. She then served for two years as vice president for administration, which gave her experience working with the university’s board of trustees, donors and the community.

When her predecessor, Sister M. JoEllen Sheetz, retired after 23 years as USF president, Sister Elise said she felt prepared to succeed her. 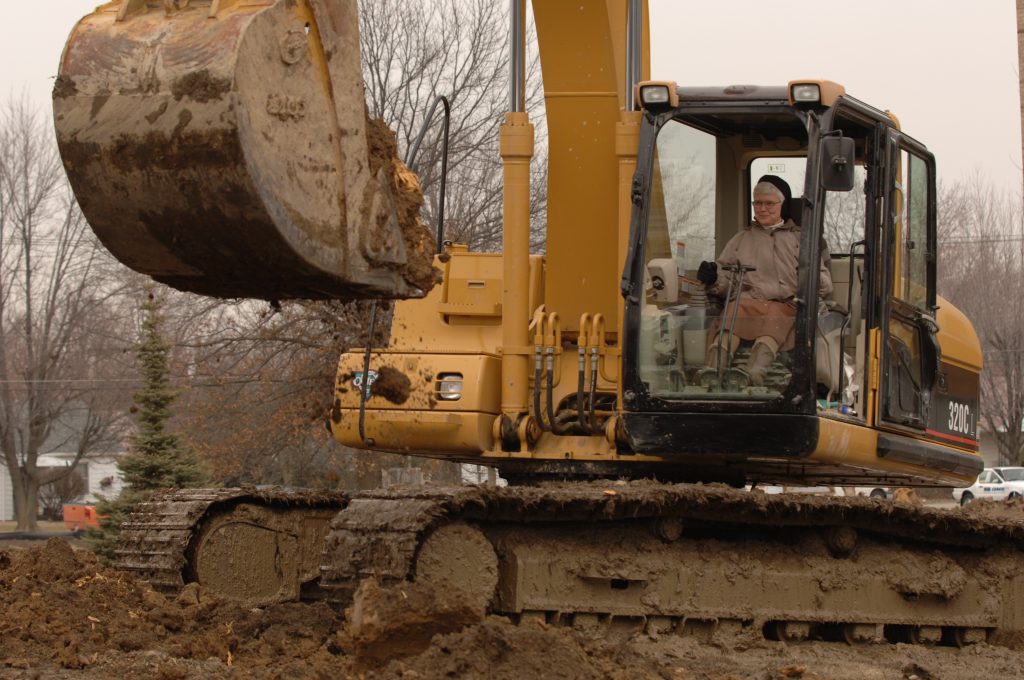 Sister Elise operates an excavator during the groundbreaking in 2006 for construction of the Pope John Paul II Center addition to Bonaventure Hall at the university.

Since becoming president in 1993, she has led the university through an era of unprecedented growth and change.

Enrollment has climbed to about 2,200 students from about 1,000 students when she took office. USF acquired the former Lutheran College of Health Professions in 1998 and has added a variety of new degree programs over the years. She also led the university through its name change in 1998 to University of Saint Francis.

The university has constructed and renovated several buildings on its Spring Street campus, built dormitories and created a downtown campus by buying and renovating the former Scottish Rite Center, Mizpah Shrine and Fort Wayne Chamber of Commerce buildings.

“Of course, our crowning jewel is our chapel,” Sister Elise said.

Sister Elise and the eight other Sisters of St. Francis members at the campus continue to live and share their faith and Franciscan values.

“We can influence the campus in a lot of ways with those values,” she said.

USF integrates its mission and Franciscan values into most classes, especially the San Damiano core classes taken by all students.

The classes introduce students to the lives of St. Francis and his early follower, St. Clare. Young people learn to incorporate Franciscan values into their own lives, including through community-service projects, said Jane Martin, a professor of film and communication at USF and its San Damiano core curriculum director.

Martin, who joined the USF faculty in 1993, said Sister Elise listens “thoughtfully and carefully” and speaks that way, too. She also consistently recognizes other people’s contributions, which strengthens the university community.

Martin has been inspired by Sister Elise’s commitment to her faith. In addition to leading efforts to build St. Francis Chapel, Sister Elise and other Sisters of St. Francis members at USF led implementation of daily sacred time. Each day, no university-sponsored activities can take place on campus while Mass is being celebrated there. Students and staff can attend Mass or take time for reflection or personal prayer.

Sacred time allows people to slow down a little and encourages students to take care of themselves, Martin said.

Legacy of trust in the Lord

Along with transforming USF through doubling its enrollment and adding new buildings and a downtown campus, Sister Elise also has made the university a vital part of the community.

“She’s made sure that everyone knows Saint Francis is the gem that it is,” Martin added.

“There is no question Sister Elise has been a significant contributor to the success of Fort Wayne,” said Fort Wayne Mayor Tom Henry, a USF alumnus. “Her impact and availability for workshops, group discussions, charrettes and board meetings helped identify her as a true local asset. Her vision alone in developing a post-secondary presence in downtown Fort Wayne exemplifies her commitment and passion to education.”

Sister Elise also has given time to the community by serving on the boards of directors of various organizations, such as the Fort Wayne Park Foundation and Embassy Theatre Foundation.

At the same time, Sister Elise said she has learned much from her time at USF.

“I think what struck me is God’s care and providence,” she said. 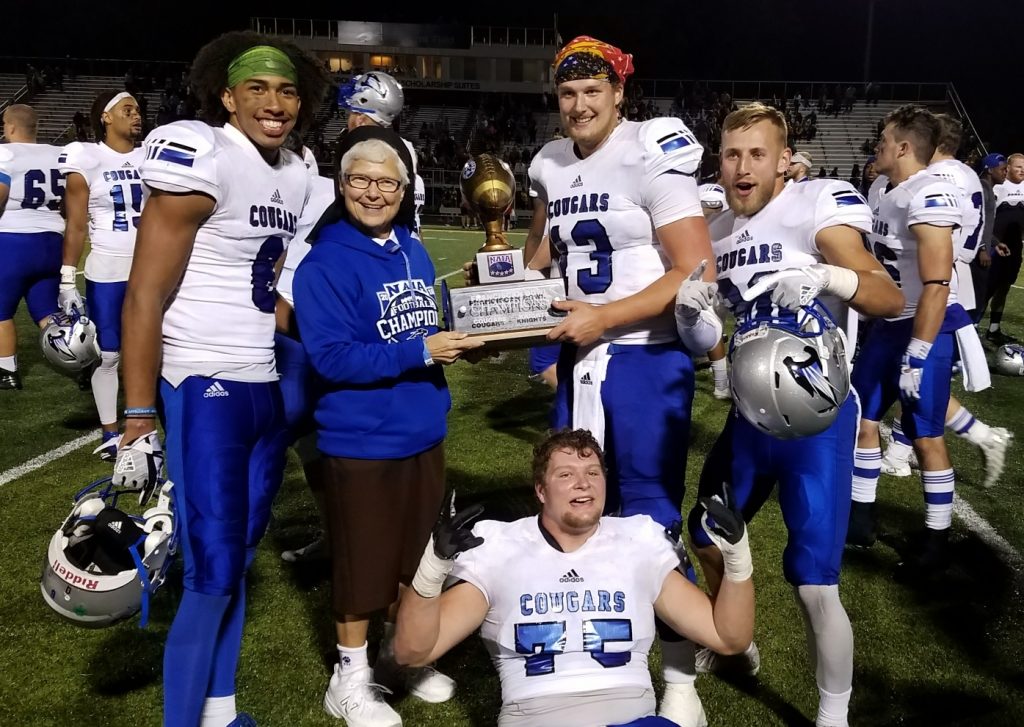 Sister Elise helped launch the football program in the late 1990s at University of Saint Francis in Fort Wayne. Above, she joins team members to celebrate their 2017 National Association of Intercollegiate Athletics national championship.

The university faced financial challenges in 1998, for example, but worked through them, she said. The additions of the Mimi and Ian Rolland Art and Visual Communication Center and the downtown campus took place through opportunities that came to the university.

“It became apparent to me that if I stay close to the Lord, the Lord will look out for me and the university,” she said.

She also has learned to rely more on others, such as Sisters of St. Francis members at USF, university staff and the board of trustees.

After retiring, Sister Elise plans to take a year of sabbatical. That will include spending time at the Sisters of St. Francis provincial house in Mishawaka. Afterward, she hopes to return to USF to possibly assist with alumni and development work.

While she has helped the university achieve many goals, she’s only concerned about one legacy:

“I didn’t do it for my lasting impact. I did it for the Lord’s work,” she said. “That’s what it really is all about — the lives of students that are changed and the work the alumni do in the community.” 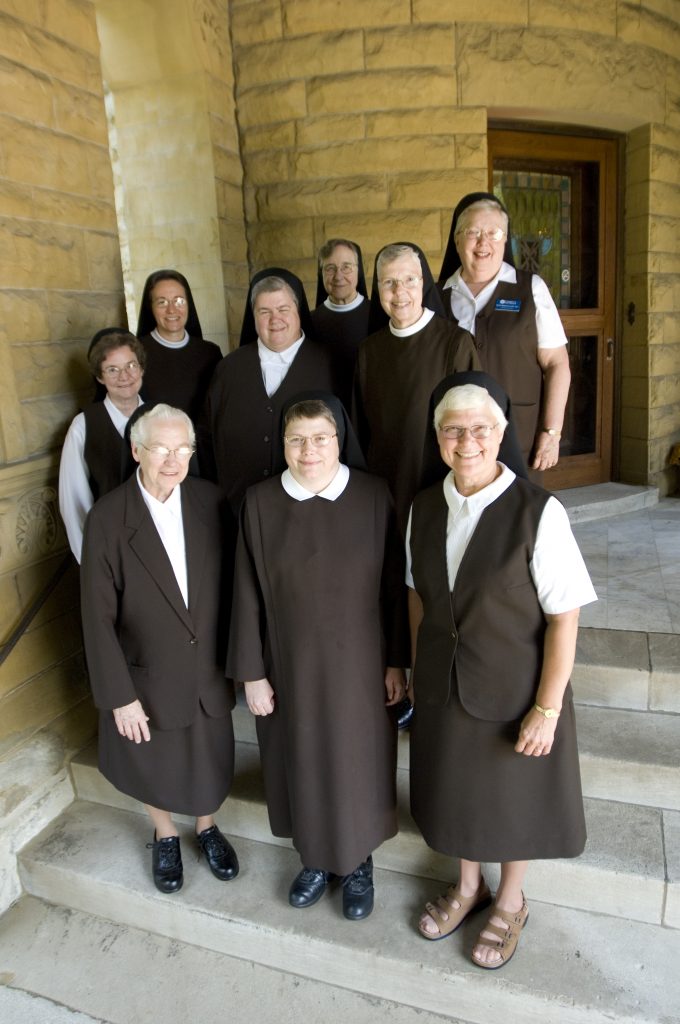 Sister Elise, front at right, and other members of the Sisters of St. Francis of Perpetual Adoration share their order’s Franciscan values with students and staff.

Join virtually for the Mass of Thanksgiving for Sister Elise. Mass begins at 4 p.m. on Saturday, June 13, 2020, and you’ll find the livestream on the USFFW Twitter account and Facebook page along with the YouTube Event.

Here are the links:

Bishop Kevin C. Rhoades will be the principal celebrant, and Msgr. Robert Schulte and Father Jay Horning will concelebrate as we give God thanks for Sister Elise and her 27-year presidency at USF.

For more information, preview the auction items or to donate, go to Legacy Gala or contact 260-399-8034.