At the Cathedral of the Immaculate Conception in Fort Wayne on Sunday, March 6, catechumens and candidates joined together in the presence of Bishop Kevin C. Rhoades to publicly proclaim their plans to enter into full communion with the Catholic Church. The many attendees came to celebrate the two ceremonies known as the Rite of Election and the Call to Continuing Conversion. 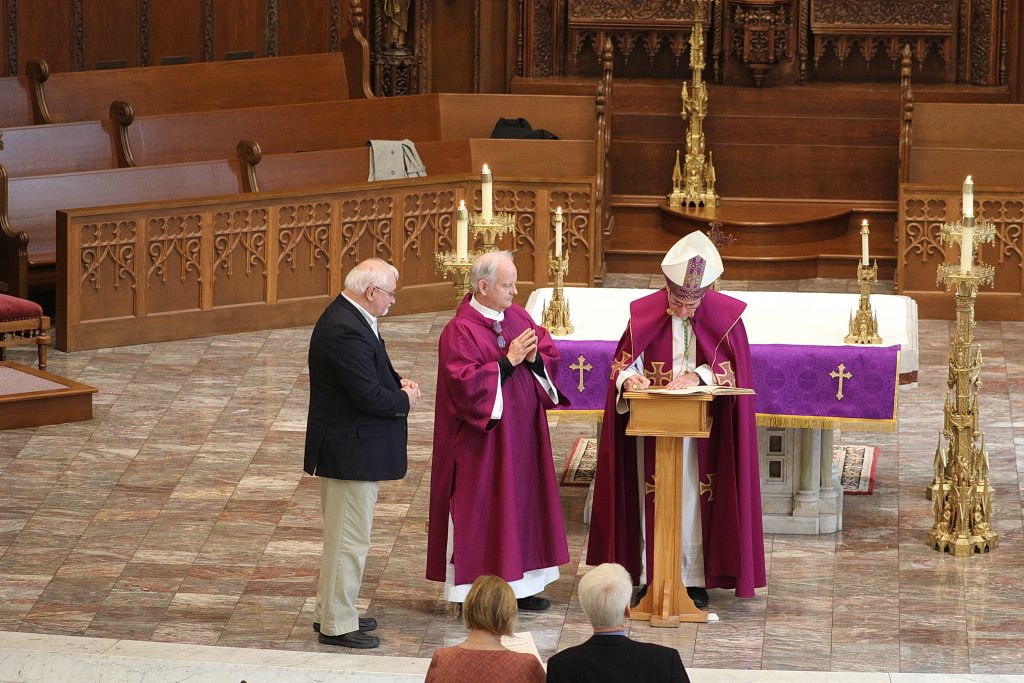 Deacon Jerome Kohrman assists Bishop Kevin C. Rhoades as he signs his name into each parish’s Book of the Elect, completing the last liturgical step for those wishing to join the Catholic Church at Easter Vigil.

One who has not undergone any of these three sacraments is deemed a catechumen. At the Rite of Election, catechumens affirm their readiness to receive all three sacraments of initiation. Those who are already baptized are called candidates. The Call to Continuing Conversion gives them the opportunity to profess their desire for Communion and confirmation. These men and women are encouraged and supported by their sponsors or godparents. After the Rite of Election, catechumens are known as the “elect” when Bishop Rhoades signs each parish’s Book of the Elect.

According to Brian MacMichael, Director of Worship for the Diocese of Fort Wayne-South Bend, there are currently 64 catechumens and 91 candidates from the Fort Wayne side of the diocese. Additionally, South Bend-area parishes contributed 111 catechumens and 63 candidates during their Rite of Election and Call to Continuing Conversion on Feb. 27 at St. Matthew Cathedral. A grand total of 329 people will come into full communion with the Catholic Church this Easter season.

In his homily, Bishop Rhoades spoke on the implications and responsibilities of what it means to be a catechumen or a candidate. He drew from the Gospel of Mark, which detailed the parable of the sower and the varieties of soil.

The first kind of soil is the path. The seed strewn along the path is not given a proper chance to penetrate the ground and is subsequently ravaged by wildlife, the bishop explained. He reassured the catechumens and candidates: “I don’t think the seed has fallen on just a path. If so, you would not be here today.” By this, the bishop implied their willingness and desire to accept the word of God and to let it permeate deep into their lives.

Rocky ground is the second category. “We can receive God’s word with joy, but, if we have an underlying hardness of heart, the roots aren’t strong,” the bishop advised, reinforcing Christ’s words. “When one’s faith isn’t deep, it is rather easy to fall away,” he continued, explaining the importance that an open heart has to the faith. 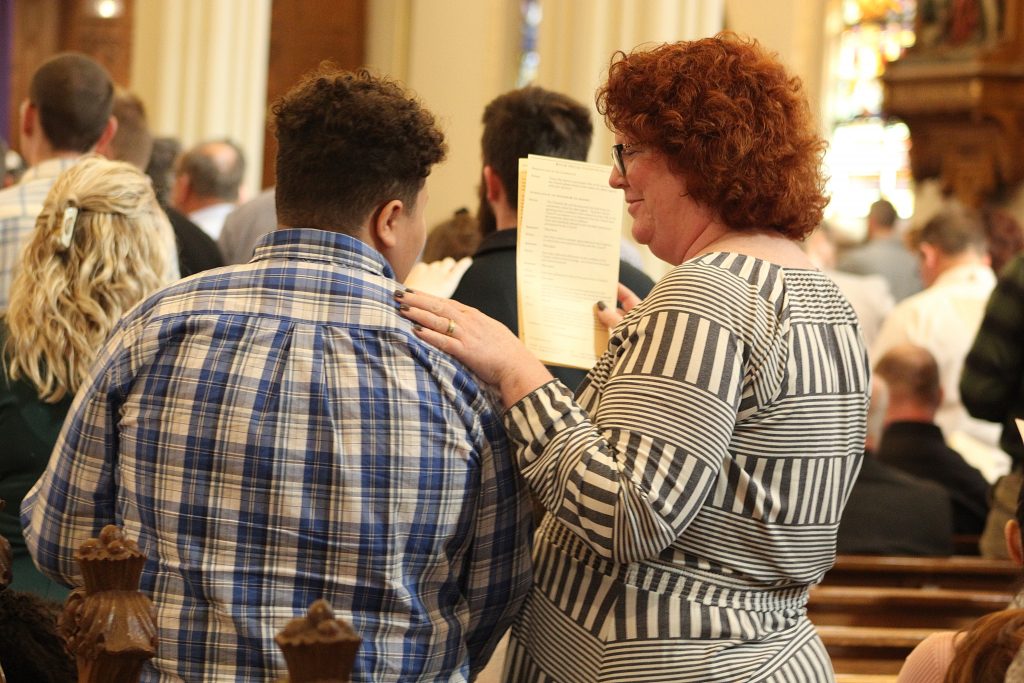 Photos by Amy Kleinrichert
A candidate from St. Joseph Parish in Fort Wayne, Camari Stinson, stands with his sponsor at the Call to Continuing Conversion celebrated at the Cathedral of the Immaculate Conception in Fort Wayne on March 6.

An abundance of thorns are present in the third form of soil. “The thorns grow and choke the seed,” he continued. He offered the example of being superficially attached to earthly matters instead of the goodness of the faith. “We can become focused on material things and worldly priorities in such a way that faith becomes secondary or even peripheral in our lives.” This, the bishop suggested, is not the goal of the faithful.

The fourth and final kind of soil is healthy and fertile. With the richness of this ground in mind, Bishop Rhoades encouraged those present to act as the saints, the best examples of this productivity and fruitfulness. “They persevered in faith,” he said. “They let the word of God form them and change them. Thus, they grew in holiness. Their lives bore abundant fruit for the Church.” Bishop Rhoades told the catechumens and candidates that this soil is the one they should strive to become to appropriately acknowledge, receive and share the word of God.

Camari Stinson, a candidate in his early teens from St. Joseph Parish in Fort Wayne, said it was his love for the sacrament of Communion and of Jesus Christ that made him want to become Catholic in the first place. He eagerly awaits receiving his first Holy Communion and expressed his desire to simply learn more about God.

A convert to Christianity nearly a decade ago, Keirsh Cochran from SS. Peter and Paul Parish in Huntington felt that his desire to become Catholic resulted from a constant “calling to something deeper.” He explained that he is most excited to “join his brothers and sisters at the Eucharistic table,” adding that “there’s not any deeper sense of community than the Eucharist.”

“The unity and the love and the giving” of the Catholic faith is what drove Julie Potter, a candidate from St. Bernard Parish in Wabash, to the Church. Julie runs her own cleaning business and has spent four years cleaning her parish’s rectory. It was in those four years that she considered becoming Catholic. She largely attributes her final decision to the familial love she received from Father Levi Nkwocha, who continued paying her wages even during the COVID-19 shutdown. “Somebody who would love me that much,” she said, to pay her for “something she did not do” revealed to her the unconditional love found in Catholicism.

As Lent draws to a close and Easter springs forth, the Catholic Church will receive fully the thousands of brothers and sisters in Christ from around the world who have received the word of God in a fertile soil for their spiritual growth.