On April 7, 1994, Rwanda’s Hutu militia began systematically slaughtering members of the Tutsi tribe. Three months later, over a million Rwandans, mostly Tutsis, were dead. It’s been 25 years, but several Michiana survivors will never forget the horror of losing scores of friends and family members in the genocide.

Why did we survive, they wonder. Marie-Rose Semuhungu was a college student in Switzerland at the time, but her twin sister was killed, as well as a brother with whom she had spoken on the phone two days before his death. Immaculee Songa lost her husband, two daughters and siblings; including a brother who was a priest, killed at a retreat center. With her 1-year-old son strapped to her back, she herself came face-to-face with the killers six times. She’s convinced God spared her for a reason: to make sure this sort of genocide never happens again. 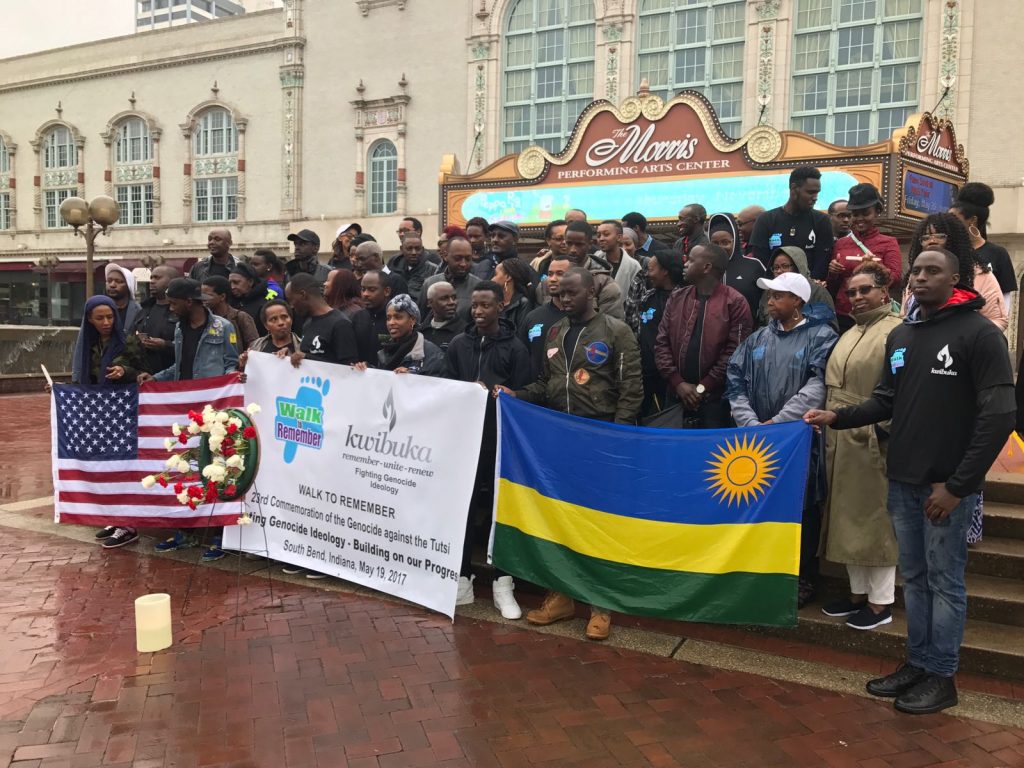 Survivors hold a Walk for Remembrance in South Bend in 2017. Rwandan refugees from across the Midwest will gather there again April 26-27 for events commemorating the 25th anniversary of the deaths of more than 1 million Rwandan people during a campaign of genocide in the African country. — Provided by Immaculee Songa

Raised in strong Catholic families, both women’s faith was shaken by the genocide. How could God permit this to happen to their faithful family members?

Semuhungu remembers hearing her father’s rosary beads clacking when she woke up in the middle of the night, and Songa recounts how her brother made sure the small quantity of milk available to them went to seminarians instead, rather than to his own family.

For months afterward, they couldn’t study, work or go to church. They felt unsafe remaining in or returning to Rwanda and eventually wound up in the United States, where Songa felt obligated to have Masses offered for her family members. She knew they were still looking down on her and expected she would do this, she said.

Semuhungu joined her fiancé here, and knew she wanted a sacramental marriage and a Catholic upbringing for her children. They found a supportive community on the west side of South Bend, not only with other Rwandans but also in their parishes.

“Thank God, who doesn’t give up on us. He knows how to bring His children back,” said Semuhungu, now a nurse at St. Joseph Regional Medical Center. “I love Him so much.” 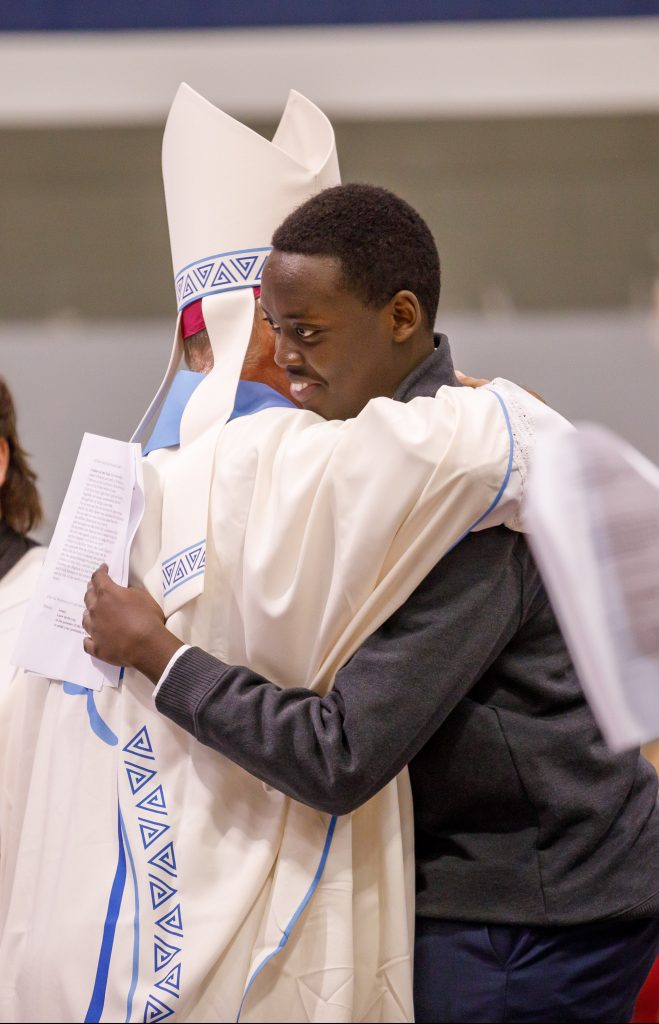 Armel Iradukunda, the son of Rwandan genocide survivors and a student at Marian High School, Mishawaka, accepted the invitation to come to know God more intimately through the sacraments, converting to Catholicism and receiving the sacraments of initiation in February. — Peter Ringenberg

Armel Iradukunda is the son of Rwandan genocide survivors, Seventh-day Adventists who were living in Kenya at the time. He regrets never having a chance to get to know his grandparents, aunts and uncles who were killed.

A senior at Marian High School, Iradukunda experienced more survivor guilt in 2017, when his mother and another passenger died as the result of an auto accident. The Rwandan community gathered around and supported his family for a week afterward. On the way home from the cemetery, “Auntie Immaculee” brought him to the adoration chapel of the Sisters of St. Francis in Mishawaka. He returned there again and again, eventually deciding he was being called to become Catholic. The youth group at St. Therese, Little Flower Parish and Sister Marie Morgan, OSF, at Marian High School where he attended, were important in this process. He was baptized earlier this year, in February, and confirmed during Bishop Kevin C. Rhoades’ pastoral visit to the school the same month.

In addition to Songa, Semuhungu and Iradukunda, about 300 Rwandans — survivors and descendants of survivors, Catholic and otherwise — live in Michiana. Most years they hold a “walk to remember” in downtown South Bend; the theme for the walk is “Kwibuka,” which means “Remember.”

This year they will gather April 26-27 for the 25th Commemoration of the 1994 Genocide Against the Tutsi, which includes an all-day symposium on Friday and an exhibit of images at the University of Notre Dame’s McKenna Hall on Saturday. The symposium will examine the past, present and future: how the genocide happened, how rebuilding is possible and how future generations, with the help of God, can make sure genocide never occurs again. The organizers urge everyone, from high school students to scholars, to participate. For details, go to http://racofmidwest.org/.