CARACAS, Venezuela (CNS) — Understanding the Bible can be challenging, but Catholics in Venezuela are becoming more familiar with Scripture through the work of a tech-savvy friar.

Capuchin Franciscan Father Luis Antonio Salazar is breaking with traditional ways of preaching and bringing the Gospel to thousands of cellphone users each week through an Instagram video series called “Vivir el Evangelio,” or “Living the Gospel.”

In the one-minute videos, the robed priest waves his arms and points his finger to the sky as he discusses key passages of the New Testament with the help of electronic music and special effects. 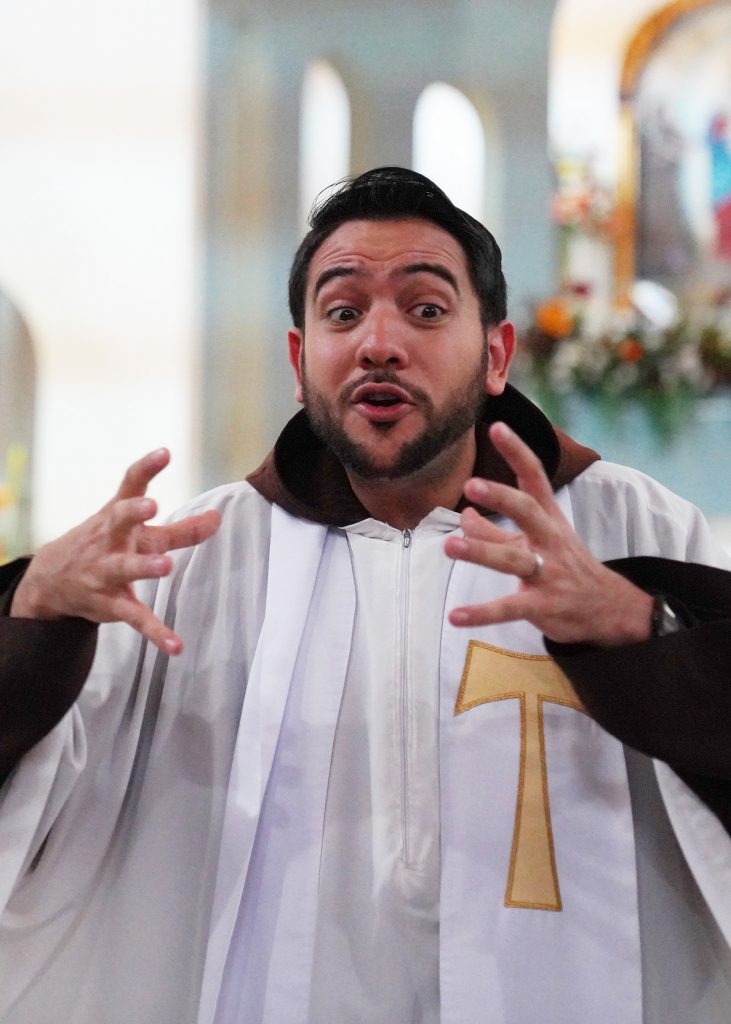 Venezuelan Capuchin Friar Luis Antonio Salazar is seen Oct. 12, 2019, during a baptism ceremony at the Our Lady of Chiquinquira Parish in Caracas. The Friar has become famous for explaining the Bible via short videos posted on Instagram. (CNS photo/Manuel Rueda)

Father Salazar, 34, described himself as a “Catholic influencer.” He started posting videos to Instagram in 2018, after a 19-year-old member of his parish convinced him it would be a good idea and offered to help with the editing and special effects.

“The motive behind this is to help people understand the Gospel” said Father Salazar, who celebrates Sunday Mass at Our Lady of Chiquinquira Church, the largest church in Venezuela’s capital. “I want to take those stories that happened 2,000 years ago with the pharisees, the scribes and the rest of the characters in the Bible and show people what they teach us about being good Christians.”

Parishioners credit the videos and Father Salazar’s energetic personality with bringing more people to the pews as Sunday Mass is now attended by hundreds of people.

But Father Salazar told Catholic News Service the videos also have helped him to connect with young Catholics in other cities and even in other Spanish-speaking countries, forming a “digital parish” to which he tries to tend daily.

Father Salazar said he also has been messaged by people with problems such as depression and tries to provide them with prayers and guidance.

“I am approached with sensitive issues, so I have to answer all the messages myself,” he explained. “I’m not just any influencer coming up with crazy videos.”

The Capuchin said the videos are part of a broader effort to make the Church more present in the lives of the Venezuelan people at a time that the country continues experiencing a harrowing economic crisis.

Hyperinflation and food shortages have forced more than 4 million Venezuelans to leave the country in the past five years, according to the United Nations. Hundreds of people have been imprisoned for protesting against the ruling socialist party and street demonstrations have been met with police repression.

Friar Salazar has attended several of the anti-government protests himself, wearing his brown habit and comforting protesters who suffer from the effects of tear gas.

“I’ve been to other countries, like Spain or Colombia or Peru, and I know there are other ways to live. So I also head out into the street to tell the world that what is going on in Venezuela is wrong. And that we deserve something better,” he said.

Father Salazar mentions that some of his superiors have asked him to not wear his robe during marches, but he maintained that doing so would betray his philosophy as a priest. “I think that it is important for the Venezuelan people to see that the Church is with them,” he said.

When there are no protests taking place, Friar Salazar’s parish helps the local population by organizing a weekly soup kitchen that has served up to 800 people in a day. Dishes are served with proper silverware and on ceramic plates to show those going through rough times that they are worthy of a better standard of living.

Father Salazar avoids discussing politics in his homilies, but he tried to bring the Bible home to his audiences by referring to everyday situations in his Instagram videos, such as the discrimination facing Venezuelan migrants who arrive in South American countries.

In a recent video, he discussed a passage from the Gospel of Luke that talks abut how Jesus cured 10 lepers that he found on the road to Jerusalem, including a man a Samaritan. It turns out that the Samaritan was the only leper who returned to Jesus to thank him for the miraculous deed.

“Interesting,” Father Salazar noted in the video. “Jesus cured a foreigner. That’s because he doesn’t suffer from xenophobia.”

As the priest continues to churn out his weekly videos, the demand for them appears to be growing. Five television stations in Venezuela are showing the “Living the Gospel” series and Catholics from the U.S. and Brazil have contacted Father Salazar to ask if he can translate the vides into English and Portuguese.

Father Salazar said he will need more volunteers to help him with that.

“These videos are something that has come from the spirit,” he said. “People like them because they are thirsty for the word of God.”