(CNS) — U.S. theologians and human rights experts on Cuba worried that any repeat of the widespread protests in Cuba on July 11 may be met with a swift, violent set of state-sponsored reactions.

There were already signals the Cuban government had disseminated a multifaceted action plan July 12 that was to last 72 hours. It included shutting down internet communications, as well as deploying plainclothes-wearing state police and military personnel to squash further protests following July 11’s massive turnout, according to Elsie Miranda.

“I am afraid for the people (there) because of their desperation and willingness to die for a chance to live,” said Miranda, a professor of theology and director of accreditation for the Association of Theological Schools.

She has led missions to Cuba in conjunction with the Catholic Church there and attended Pope Francis’ visit to Cuba in 2015.

A communication that Miranda has seen, written in Spanish and circulating among human rights activists, appeared to detail the Cuban government’s nine-point plan to shut down further civic displays of unrest and called for using whatever means necessary to do so, including a large presence of plainclothes police dispatched to mingle among protesters to make arrests.

Miranda, who is normally based in Pittsburgh but is working this summer from Miami, told Catholic News Service in a phone interview the recent protests show a bold new willingness and determination among Cuban youth to stand up to the communist regime and to express that they have nothing to lose now.

But if there isn’t a turnaround in the Cuban military, she said, it may end badly for the protesters. 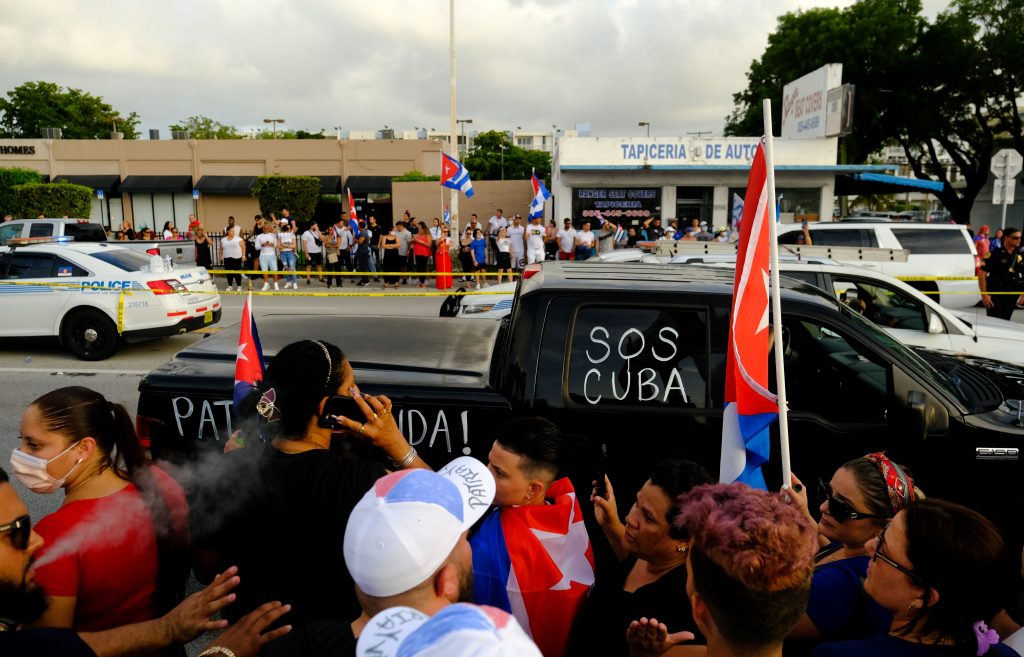 “Unless there is a shift in the military and they turn — and I don’t see that happening — this will be a very sad moment in our history,” Miranda said, pointing out the hardline leadership of Cuban President Miguel Díaz-Canel is a continuation of Raul Castro’s presidency.

“How long can (Díaz-Canel) hold on to power using these methods if there is a slaughter of the people? He has the support of Venezuela, Nicaragua and maybe even Argentina to come into Cuba,” she said.

The tone of the July 11 protests in Cuba was wrapped up in a popular Cuban rap song, “Patria y Vida” (“Nation and Freedom”). It’s a play on words and a new response to the popular slogan of the Cuban Revolution, “Patria o Muerte” (“Motherland or Death”).

“I have to believe in miracles and hope for some kind of intervention, but I am afraid there will be a lot of people dying tonight,” Miranda added. “The people have reached a point where the value of their life is less to them now than the value of facilitating change.

“There really is a sense that the camel’s back is broken and they don’t care what the consequences are anymore because if they die, they die heroes.”

A poor economic situation in Cuba has reportedly been exacerbated in recent months by the coronavirus pandemic, although it is hard for outsiders to know how significantly the pandemic is impacting the country as a whole. 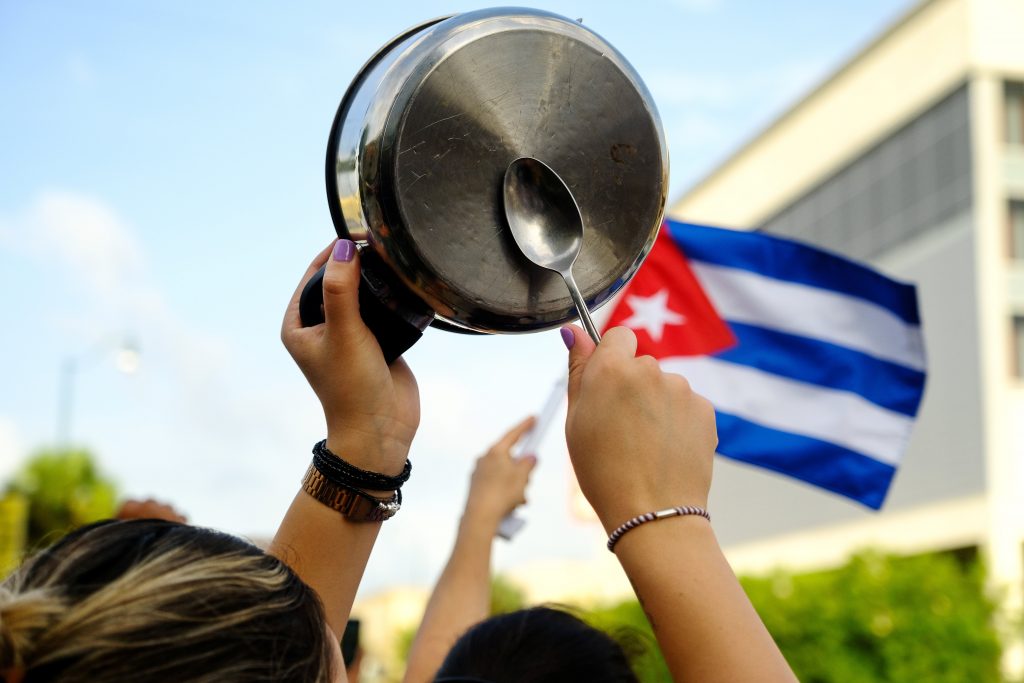 A demonstrator in the Little Havana neighborhood of Miami bangs on a pot July 12, 2021, as people rally in solidarity with protesters in Cuba. (CNS photo/Maria Alejandra Cardona, Reuters)

Cuba claims to have developed a COVID-19 vaccine, and protesters were calling for greater access to vaccines as well as demanding an end to the 62-year dictatorship.

A national coordinator of the Christian Liberation Movement, known as MCL for its initials in Spanish, said thousands of Cubans were demanding freedom and an end to repression and misery.

The group also demanded “the release of political prisoners, the annulment of the repressive laws against freedom, recognition of economic rights of free enterprise for Cubans, and recognition of (the right of) each Cuban — inside and outside the island — to vote and to be elected,” it said.

“My view of this is that it is a combination of a dire economic situation owing to the dramatic decline in tourism, loss of economic assistance from Venezuela, and the increasing connectivity of the Cuban population, both domestically and abroad,” said Peter Sanchez, a professor emeritus of comparative politics at Loyola University Chicago, who has conducted field research in Cuba. He made the comments in an email to CNS.

News reports said the unprecedented protests in Cuba have taken place not only in Havana but in 14 other Cuban cities. They were mirrored by a vocal street protest in Miami’s Little Havana neighborhood late afternoon July 11.

Miranda, who attended the Miami event, which took place around the city’s popular Versailles Cuban Restaurant, said protesters there and those calling in to Miami’s Spanish radio stations were asking President Joe Biden to intervene.

Others were still calling for former President Donald Trump to be the agent of change for Cuba, she said, adding that the former president is still seen by Miami’s Cuban-Americans as supportive of regime change in Cuba.

But Miranda said the Catholic Church and Pope Francis — given the Church’s relative independence in Cuba — should seize the moment to make a new gesture and express support of the Cuban youth protests.

“I was there (in Havana) for the papal visit with Francis when the youth were telling him that we need to have a future and have no place to practice our trade; the pope needs to exercise his leadership in Cuba in a more forceful way and I think he has been a little too slow,” she said.

“But now we need leadership — strong, forceful, revolutionary leadership that stands up to these abusive powers and oppressive regimes,” she added. “I am concerned that it may come too late.”

In Colorado, Miguel De La Torre, professor of social ethics and Latinx studies at the University of Denver’s Iliff School of Theology, has led research delegations to Cuba. He said he was cautiously watching to see what happens in Cuba in the days ahead in light of how past challenges to the Cuban regime over the years have been stifled.

He pointed out a 2020 clampdown of the San Isidro artist movement in Havana during which the government forcibly detained and then released protesters seeking greater freedoms.

“The fact that the people are crying out for life is very significant. It is not just protest for the sake of protest, it is calling for something significant,” De La Torre said, adding that if the pandemic is hitting the country hard, then it may be pushing the Cuban people past the boiling point.

“At a time like this, maybe we should listen to those who are protesting in the streets — risking everything — and pay attention to what they — and they alone — want,” he added. “They are not pawns to be manipulated by the right or the left — instead their free agency must be respected and supported during these momentous events.”