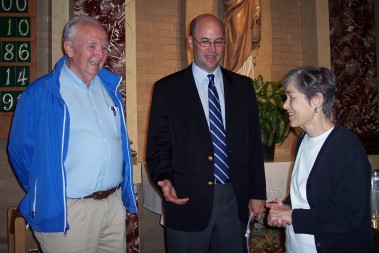 Richard Garnett, center, stayed after his presentation in St. Matthew Cathedral to discuss religious freedom with members of the audience. Here he talks with Michael and Marian Crowe, who are members of Sacred Heart Parish.

SOUTH BEND — “Religious freedom is a human right — not a concession — grounded in human dignity, fundamental and essential for human flourishing. Every person, because he or she is a person has the right to religious liberty.”

This was the message University of Notre Dame law professor Richard Garnett brought to an audience in St. Matthew Cathedral on the eve of July 4, the night before the official closing of the U.S. Bishops’ Fortnight for Freedom. Garnett is an expert on the U.S. Constitution and is a consultant to the United States Conference of Catholic Bishops’ Ad Hoc Committee for Religious Liberty.

“Our founders put religious liberty at the heart, the core, not the periphery, of their bold new project,” he continued. “They knew that, unless our most sacred things are protected, all our other freedoms — press, speech, conscience, privacy — are vulnerable. Religious freedom was widely seen not as a gift, but, as it should be, as part of the very structure of a free society.”

Garnett warned that religious freedom questions are “particularly pressing today,” because the looming Health and Human Services (HHS) mandate would require most religious employers to provide insurance coverage for so-called “preventive services.” These services include contraceptives, sterilizations and abortion-causing drugs, all immoral “services” that Catholic institutions cannot and will not cover. He noted that Notre Dame is among the many religious institutions that have filed lawsuits challenging the legality of the HHS rule.

But what exactly is religious liberty? Garnett said there is some confusion over the term and what it means for U.S. citizens.

“This freedom should be understood not merely as ‘freedom from’ religion or ‘freedom of religion,’ but also — and importantly — as freedom for religion,” he said.

He endorsed Pope Emeritus Benedict XVI’s recognition of America’s “positive” secularity that distinguishes between church and state in order to protect religious freedom.

“We wisely distinguish in our law between the institutions and authorities of religion from government,” Garnet said, “not by building a ‘wall’ between Sunday prayer and Monday work. And we do this not to cage or confine religion, but to protect religious freedom, which includes the right, the liberty to live out a faithful, integrated, balanced life.”

Still, the real meaning of religious liberty has been debated, even from the beginning of this country, the law professor said. One area of confusion is that some people and even some government officials believe that “Our Constitution requires the exclusion or muting of religious voices and arguments from the public square of civil society,” he said, adding that this view is not necessarily prejudiced or hostile, but rather reflects misunderstandings of the nation’s Constitution, history and traditions.

Some people think that religion should be confined to the private space of one’s home or church, Garnett noted, but he argued that a “healthy” secularism should tolerate and welcome religion into the public square.

He cited the statement of the U.S. Bishops’ Ad Hoc Committee for Religious Liberty, “Our First, Most Cherished Liberty,” that observed “Religious liberty is not only about our ability to go to Mass on Sunday or pray the rosary at home. It is about whether we can make our contribution to the common good of all Americans.”

Our faith certainly has something to say about questions of public policy and social justice, he explained, but this does not mean that every political argument needs to be a religious one.

Another source of confusion, he said, is the misunderstood term “separation between church and state.” Too often this term is presented as an “anti-religious” idea, Garnett said, rather than what it should be seen as:

“Our Constitution separates ‘church’ and ‘state’ not to confine religious belief or silence religious expression, but to curb the ambitions and reach of governments.”

This does not mean a high wall between church and state, he continued, but rather: “This independence protects individuals’ freedoms — believers and nonbelievers alike. And this is one of the reasons that religious liberty matters: It is important — if we care about protecting liberty from overreaching governments — to affirm that government authority is not absolute.

Garnett fielded questions from the audience after his talk and said there were hopeful signs that the lawsuits brought against the HHS mandate may have some success in showing that the mandate would burden religious institutions and compromise their mission.