A symposium on Catholic family life attracted 30 experts in theology, social sciences and family life to the University of Notre Dame July 19-21 to discuss ideas for enhancing the spirituality and vitality of Catholic families worldwide.

“Exploring the Unique Role of Catholic Families in Growing the Faith,” touched on issues such as: keeping children Catholic; bringing nontraditional families into the life of the parish; helping parents catechize their children; ministering to Catholics of all ethnic and racial backgrounds; evangelizing through the family; and helping Catholic families function as the “domestic church,” a theme that permeated the symposium.

That concept of “domestic church” was introduced by the Second Vatican Council’s “Dogmatic Constitution on the Church” (Lumen Gentium). Not only are parents like pastors to their children, but also “The Christian family constitutes a specific revelation and realization of ecclesial communion,” according to then-Pope John Paul II, writing in his 1981 apostolic exhortation “The Christian Family in the Modern World” (Familiaris Consortio). He also noted that future evangelization depends on the “domestic church.” 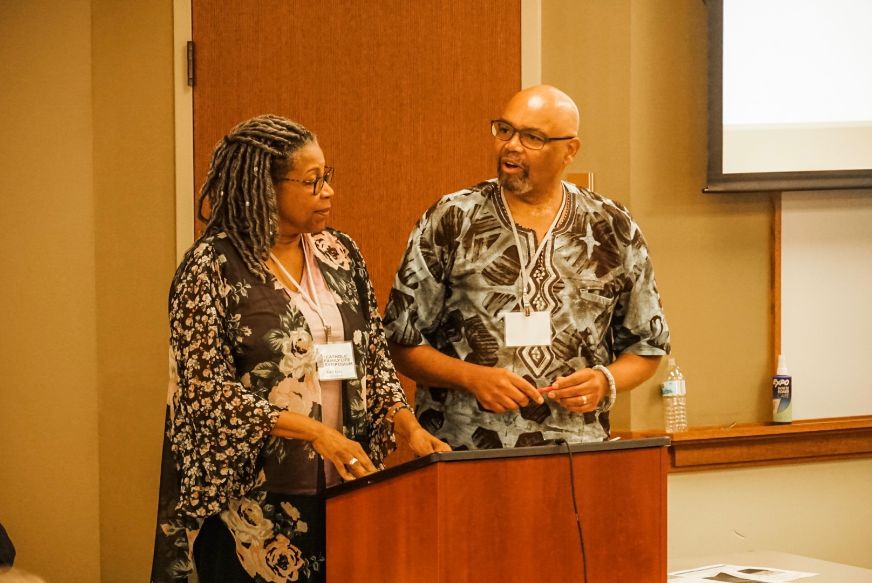 Terri and Andrew Lyke discuss the Catholic African American experience. They are the founders of Arusi Network Inc., which educates African Americans on the skills and benefits of Christian marriage.

Several speakers indicated that since Vatican II (1962-65), the Church has not done much to develop that concept of “domestic church” and help parents understand and embrace their role of evangelizing and “being” church as well as attending church.

Social scientist Mark Gray, a senior research associate for the Center for Applied Research in the Apostolate at Georgetown University, cited an alarming picture of Catholic demographics in this country. He noted that recent polls reveal that in the 1970s, over 70 percent of Catholics married in the Church; today it is less than 20 percent. Further, 68 percent of Catholic children receive all their religious education in the home, not in Catholic schools or CCD programs.

Theologian Joseph Atkinson of the John Paul II Institute at The Catholic University of America cited a presentation by Bishop Robert Barron, Auxiliary Bishop of Los Angeles, to the June meeting of the U.S. Bishops. Bishop Barron reported that 50 percent of Catholics 30 years old and younger have left the Church and that the median age of those leaving is 13. For every person who joins the Church today, more than six are leaving.

Atkinson said that political and cultural forces are trying to move people away from orthodoxy and to destroy the family, and “Our current approaches, whatever they are, manifestly are not working.”

“One fundamental problem is that few people . . . are willing to admit that in the West, at least, an authentic Christian faith . . . that informs people’s values as so true that one would be willing to die for that faith, has simply been eviscerated from our lives and our culture system.”

Helen Alvaré, a law professor at George Mason University and former consultor for the Pontifical Council of the Laity, specializes in the intersection of law, religion and culture. She told the symposium that the Supreme Court of the United States “articulates beautiful values but promote terrible things,” such as “inventing” a constitutional right to contraception and abortion and finding that marriage is not a special unity, but rather two people with individual ideas deciding what makes family.

Because of various cultural and economic factors, Alvaré said, the language the Catholic Church is using about the family is incomprehensible to many people because it does not relate to families’ ordinary experiences, and people have no idea what “domestic church” means.

She proposed that the Church needs to develop “new language” that touches on actual life experiences and demonstrates the many positive effects of the Church teachings on family: equality, dignity, happiness, freedom, economic success, and care for creation and the future. In turn these values would be a “gift” to all families and help the U.S. to become a true “melting pot” of all peoples, she said. 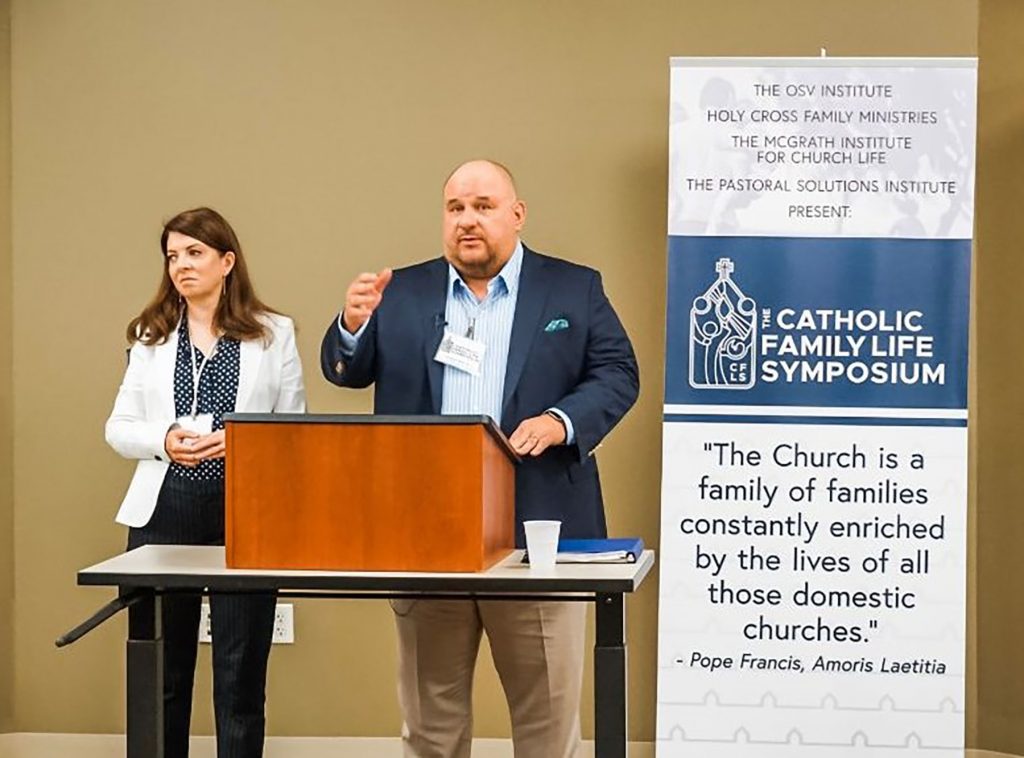 Lisa and Gregory Popcak, organizers of the Catholic Family Life Symposium, speak during the July 19-21 conference at the University of Notre Dame. — Photos provided by Rachael Popcak

Family counselors Gregory and Lisa Popcak, directors of the Pastoral Solutions Institute and organizers of the symposium, proposed a framework for helping people understand that the family is an icon of the Trinity. Further, family life is liturgical by its very nature, and the everyday routine of family life is a way of growing in holiness.

In their presentation titled, “Liturgy of Domestic Church Life,” the Popcaks identified three “rites” of the liturgy of the “domestic church,” all connected to the sacrament of baptism: the rite of relationship/attachment; the rite of rituals of connection; and the rite of reaching out.

The Popcaks announced that the symposium was launching The Peyton Institute for Domestic Church Life, named after Venerable Father Patrick Peyton, a Holy Cross priest known as the “Rosary Priest.” That institute will focus on supporting “domestic church” life through activities including research, training and retreats. The Popcaks encouraged all the experts to share their ideas for this project.

The Peyton Institute’s sponsors are Holy Cross Family Ministries and the Pastoral Solutions Institute, both of which co-sponsored the Notre Dame symposium. Also sponsoring the symposium were the Notre Dame Institute for Church Life and Our Sunday Visitor Institute.