FORT WAYNE — Clergy, liturgical ministers, catechists and other lay leaders gathered at Bishop Dwenger High School March 26 to attend the day-long workshop titled, “Mystical Body, Mystical Voice: Encountering Christ in the Words of the Mass.” Those attending were offered a comprehensive formation for the upcoming implementation of the new translation of the Roman Missal.

The English words of the Mass have been more faithfully retranslated from the official Latin text, and Catholics will begin using these new words on the first Sunday of Advent, Nov. 27, 2011.

The workshop was presented by the Liturgical Institute at the University of St. Mary of the Lake in Mundelein, Ill., and coordinated by the Diocese of Fort Wayne-South Bend offices of catechesis and worship.

Presenter Father Douglas Martis is the director of the Liturgical Institute. He is a priest of the Diocese of Joliet, Ill., and chair of the Worship Department at Mundelein Seminary of the Archdiocese of Chicago. Father Martis teamed up with presenter Evan Stricklin, who serves as a lay pastoral minister at a suburban parish in the Diocese of Metuchen, N.J., for the Fort Wayne workshop.

The day was broken into five sessions.

The first session was titled “Word Become Flesh.” The session discussed how to prepare parishes for the new Missal by laying the groundwork for liturgical understanding. The session covered an introduction to liturgical and sacramental theology, Christ present in the liturgy and how Christ continues to work in the sacraments.

“The reality of the liturgy is Christ the Word. In Him and in His Mystical Body, the restored dialogue of love resonates in the world today. The words of the liturgy are sacramental signs of the Word. To speak, hear, sing and pray the words of the Mass is to encounter the Word, Jesus Christ,” said Father Martis, to summarize the session.

The second session was titled “Maturing in the Word.” Father Martis and Stricklin spoke of a continuous thread of liturgical instruction. There exists continuity between the Constitution on the Sacred Liturgy and the Third Typical Edition of The Roman Missal in English. The Church’s practice of translating has matured over 50 years. And pertaining to vernacular translations, a number of principles — theological, ritual and linguistic — are now used by the Church to translate liturgical texts.

The third session titled “Liturgy of the Word,” and the fourth session, “Liturgy of the Eucharist,” provided an in depth look at the translation changes of the Mass.
The final session was titled “Tips for Catechesis.” It offered tips for clergy and laity to successfully implement the new translation. The laity is encouraged to make spiritual preparation by praying over the Mass texts, to read explanation of Mass texts, to attend or organize local study sessions, to be attentive to the texts and ask questions about their origin and meaning, and to join a Catholic Bible study.

Father Derrick Sneyd, pastor of Immaculate Conception Parish in Auburn, attended the workshop with 27 parishioners. He plans to provide training to prepare his parishioners for the implementation of the new translation of the Mass. “I’m planning before every liturgy, I will do a five minute PowerPoint — very brief and succinct — and it will be a continuing thing starting after summer,” Father Sneyd said. He plans to use examples of the “old words that are being reinserted into the new translation.” He said he will also provide adult education on a greater level.

He thought the day was wonderful, “and it reinforces our role as priests,” he said, “a representative of Jesus for the community. And it’s also educational. It brings back a lot of thinking, a lot of history, so it’s very nice.” 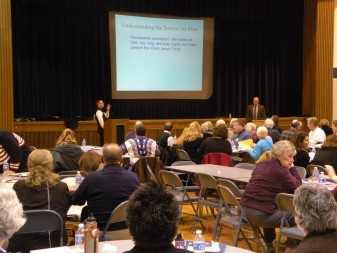 Mystical Body, Mystical Voice: Encountering Christ in the Words of the Mass workshop presenters Father Douglas Martis, director of the Liturgical Institute at the University of St. Mary of the Lake in Mundelein, Ill., left, and Evan Stricklin, right, speak about the upcoming implementation of the new translation of the Roman Missal.

Many who attended cited the importance of being attentive to the words. Ben Wagner, the youth director at St. Joseph Church in Bluffton, said, “I think the new translation will be very effective to reaching out to all ages to develop a deeper appreciation of the liturgy and its historical beginnings.”
Michelle Paxton, the administrative assistant at St. Joseph Parish, added, “I am excited. Vatican II is all I’ve ever known. I’m excited because it gives us cradle Catholics a deeper meaning in what we are saying.”

Cheryl Whitaker, principal of St. Louis Academy, Besancon, in rural New Haven, told Today’s Catholic, “I really enjoyed the presentation today because I think the new translation will make us more present in the Mass.”

Whitaker explained, “We all have to pay attention to the words and as cradle Catholics we take those words for granted. We learned them. They’re rote. And unless you are really concentrating, sometimes you lose sight of being in the Mass.”

She was recently discussing the implementation with her husband, who just joined the Church two years ago. “Even though he is a full member,” Whitaker related, “there is still that little bit of a (feeling) that he doesn’t know all the prayers, that he’s different than everyone else. And this puts the new Catholics on an equal footing with cradle Catholics because we all are starting from the same point now.”

Brian MacMichael, director of the Office of Worship, said, “This is a very exciting and important time, and a fulfillment of the goal of the Second Vatican Council that we strive to engage the heart of the Roman Catholic Church’s rich liturgical tradition in our vernacular prayer. We who are preparing for the implementation of the new Missal are very grateful to the Liturgical Institute for developing this excellent workshop and taking it around the country. In particular, it’s great that they focus on what matters most — how this new English translation, which is so grounded in Scripture, should help all of us enter into a deeper and more reverent sacramental encounter with Jesus Christ at Mass.”

The same workshop was offered at Marian High School in Mishawaka on March 5.