Few can imagine the horrors that police officers deal with on a daily basis. Most first responders experience tragedy and trauma multiple times on a shift. 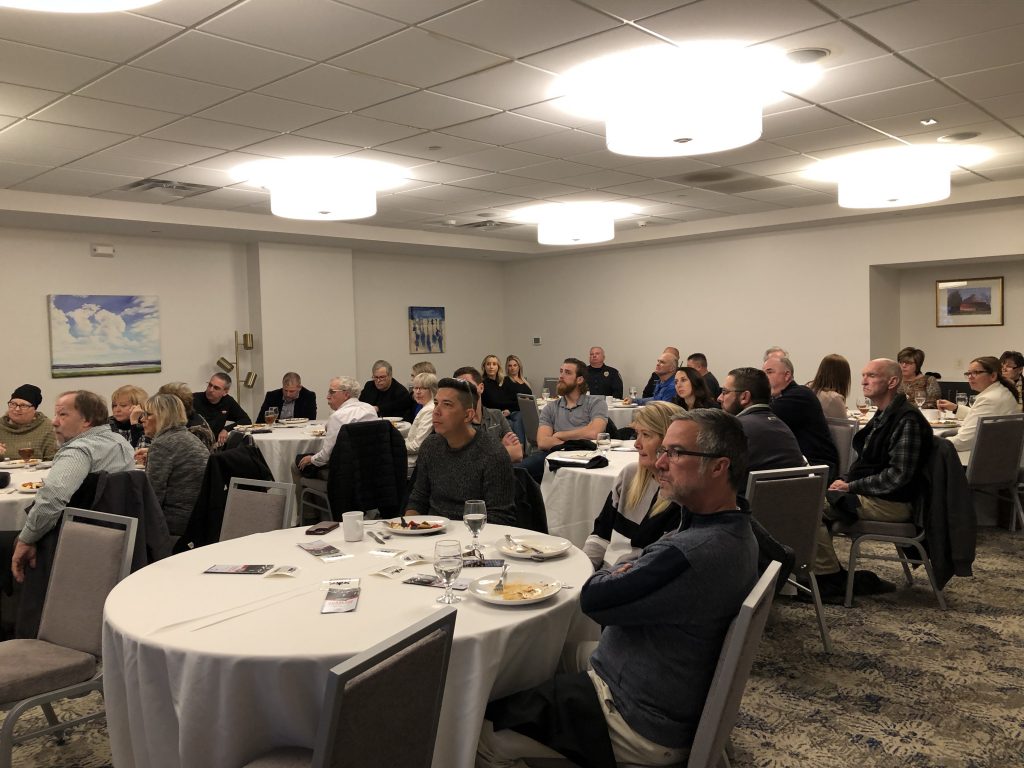 Brooks was a youth minister at his church and has worked with the Elkhart Police Department chaplains since 2012. In 2020, he became a full-time lead chaplain.

Brooks is cousin to Jennifer Horoky, Director of Religious Education at St. Thomas the Apostle Church in Elkhart. Horoky joined the effort of the recently formed organization Friends of Local Police to provide funding for the full-time lead chaplain and the chaplaincy program.

“They are not on the payroll,” Horoky said. “They have to raise their own funds and they volunteer their time as missionaries. Many people don’t realize that or realize what chaplains do.”

At the luncheon held at the Hotel Elkhart, Brooks and the two officers spoke to the approximately 50 people in attendance about the chaplaincy program. Brooks said that aside from himself, the other chaplains are Jim Bontrager, who started the chaplaincy program at the Elkhart Police Department; Marta Cerda; Brad Ulrich; and Jeff Enfield, who was being sworn in that week.

“Our mission is to serve those who serve us,” Brooks said. “Our focus is on the police officers and their families first, and the community second.” 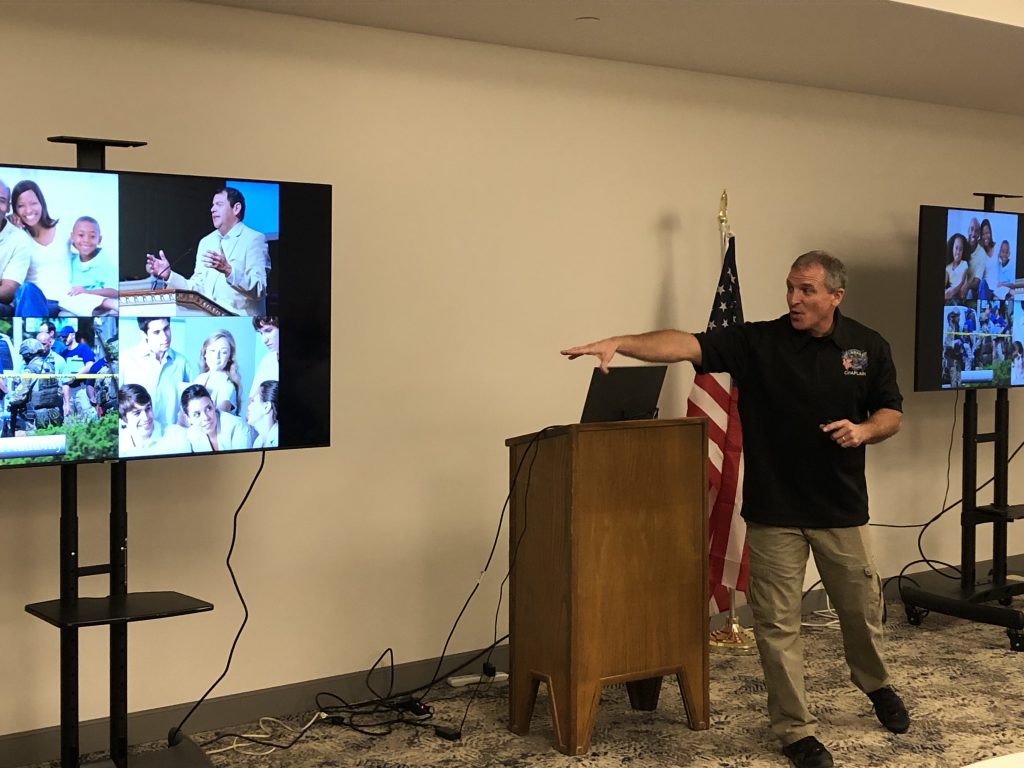 He explained what the chaplains do, including supporting officers during critical incidents; debriefing officers after critical incidents; providing encouragement, especially before major events; conducting weddings, funerals, and vow renewals; visiting hospitals for employees and family members; training officers in stress management ethics; offering prayers at special events; and acting as liaisons to the community.

“Here’s what we don’t do,” Brooks continued, “We don’t shove religion down their throats, don’t tell others what to do with their lives unless requested, and we don’t assume a holier-than-thou attitude.”

He added that everything they do is faith-based, “but we’re entering into their world and we meet them where they’re at. Faith comes up usually when they bring it up.”

He then shared stages of a police officer’s career in terms of attitude and how that changes their world view, causing some to become angry, hardened, and cynical. Brooks shared statistics that show in an average small town, an officer will be involved in 188 critical incidents in his or her career.

“The stuff they do is abnormal and we expect them to act normal,” he said.

The suicide rate is double the deaths of officers killed in the line of duty and 32 percent have relationship issues, according to Brooks.

To help reduce those statistics, the Elkhart Police Department has a psychology resilience plan that is shared with new hires, as well as a spouse academy. Officers are trained for peer support roles and work with retirees, preparing them for a second career. He shared specific critical incidents that he was on hand for saying, “I was able to be there because I don’t have a 9 to 5 (job).”

Thayer has been with the force for 31 years. He recalled when asked to take Brooks on a ride-along that he advised Brooks that he’d need time and patience to develop trust and relationships with the officers.

“That would be the biggest hurdle,” Thayer told him, “It’s hard to see God and the love of Christ with what we do — we deal with the evil.”

However, he told Brooks, even the most hard-hearted officers would hit a point of need and they’d reach out to him.

“It’s unbelievable what we see in a career — if we didn’t have these people, we’d have a lot more dead cops,” Thayer said.

Thayer said, “They’re making a difference in this profession — we have something special in Elkhart.” 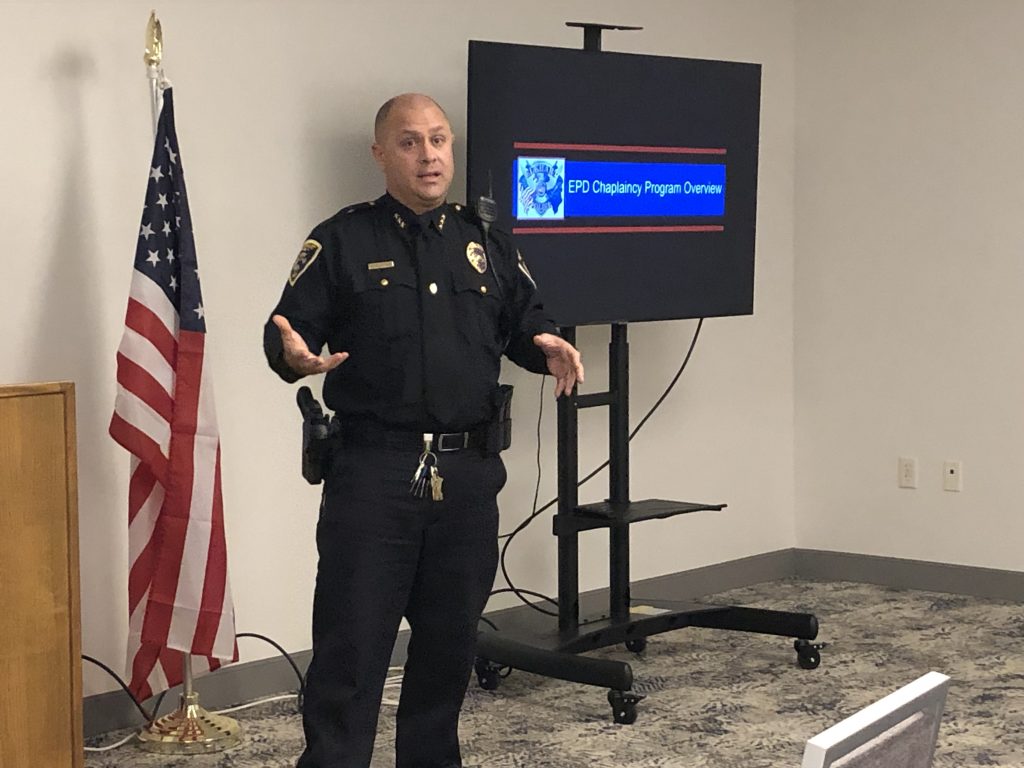 Elkhart Police Department’s Asst. Chief Dan Milanese tells attendees at a luncheon to raise awareness and support for the chaplaincy program how priceless it is to have a full-time chaplain in the building.

In his talk, Milanese spoke from an administrative viewpoint, particularly about continuing to secure resources for the program to grow it and make it better. He has Brooks in the room when they discuss policies.

He also spoke of the uniqueness of Elkhart’s chaplaincy program, which was a factor in his decision to join the force. He was a member of another local department and after being involved in a critical incident, he didn’t recall their chaplain reaching out to him, but three days later, Bontrager stopped in to check on him.

“The time that we have [Brooks] in the building — I can’t put a price on that,” he concluded.

Chris Welch of the Friends of Local Police organization spoke briefly, saying, “We’re all here because of community, and that means being safe.” He asked those present to support the chaplaincy. “They are key contributors, and they’re not paid.”

He explained that Friends of Local Police is a donor-advised fund through the Elkhart County Community Foundation and those who wish to support them can do so through the foundation and choose FOLP’s fund.

Brooks added that prayer support is also greatly needed. “I long for every Elkhart Police Department’s officer to experience God’s very best for their emotional, physical, and spiritual well-being.”

Welch concluded, “We have a whole staff of chaplains who don’t get paid — we owe it to them to honor them.”

St. Thomas the Apostle’s Deacon Jim Fuchs also attended the luncheon and commented afterwards, “This is a great ecumenical effort.”

To learn more or to donate to the Elkhart Police Chaplains, visit www.folpelkhart.com/chaplain or go to the Elkhart County Community Foundation website at www.inspiringgood.org/give-online/.  Under tab 4 “Amount & Designate”, select “Friends of the Local Police.”  There is an annual goal of $50,000 to cover salaries, FICA, training, outreach, and future growth of the program.