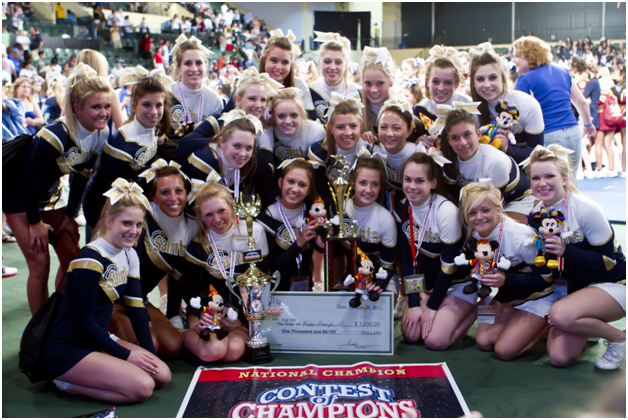 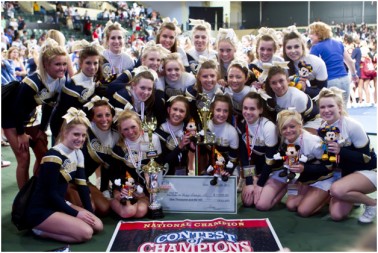 The Bishop Dwenger varsity cheerleaders were named Grand National Champions at the Contest of Champions’ national competition in Orlando, Fla., on Feb. 26. The squad received three awards during the competition: a first place trophy for the Varsity Division; a Level 5 High Score Award for having the highest score of all Level 5 teams (Level 5 teams have the highest skill levels); and, they completed the sweep with the highest point total of all teams at the competition and won the title of Grand National Champions.

FORT WAYNE — The Bishop Dwenger Saints’ varsity cheerleading squad just wrapped up the most successful season in school history with three state titles on their resume, according to head Coach Amy Gonzagowski.

“I love coaching these girls because they have not only great skills but are some of the smartest and hardest working kids in the school,” she said.

The squad’s grade point average is 3.87, and the girls were recently named the Grand National Champions at the Contest of Champions national competition in Orlando, Fla. During the Feb. 26 event, Bishop Dwenger received three different awards: a first place trophy for the Varsity Division, a Level 5 (those with the highest skill level) High Score Award for having the highest score of all Level 5 teams and the highest point total of all teams at the competition to win the title of Grand National Champions.

The 2011 winners were led by an amazing group of seniors. After a poor warm up at the nationals, Gonzagowski detailed, “I was blown away when the seniors pulled the girls aside and told them they would be great and to give the performance of their lives. The rest of the team responded and put on the best routine I have ever seen since coaching cheerleading. The seniors would not let any member of the squad give up at any time during the entire season.”

The varsity cheer group at Bishop Dwenger started their competition season in August with the Indiana State Fair, where they finished in third place. Next up for the Saints were the local competitions around the area to prepare for the Indiana Cheer Association state finals in November.

Bishop Dwenger finished as runner-up in the qualifier then in the top spot the following week at the finals.

Another highlight of the season was cheering at Lucas Oil Stadium for the football team who finished second at the state finals.

After the Christmas break, the squad began concentrating on the national competition while cheering for both the boys’ and girls’ basketball teams. In February, the grueling season finally culminated with the clean sweep in Florida.