WASHINGTON (CNS) — In an effort to stem the pandemic of COVID-19, bishops’ conferences and dioceses around the world began suspending public Masses.

On March 12, the bishops of Quebec canceled all weekend Masses across the province until further notice. The step was taken in response to measures announced by the Quebec government to combat the spread of the coronavirus, including limiting public assemblies to fewer than 250 people.

The bishops said they wanted to “contribute to this joint public health effort and act in solidarity with the authorities.”

“Given the impossibility, in many places, of managing the limit of 250 people gathered, also considering that many of our parishioners are over the age of 65 and are therefore more at risk of contracting the virus,” all weekend Masses were canceled, said a statement from the Quebec Catholic bishops.

Churches were to remain open for small gatherings and for personal visits, but parishioners were encouraged to view Mass on TV, pray at home and read Scripture.

Several archdioceses and dioceses in the United States — including Seattle, Chicago and Washington — made similar closures. Along with the suspension of Masses came a dispensation of the Sunday obligation. Some dioceses continued to offer Masses, but encouraged anyone with a compromised immune system, especially the elderly, to remain home.

In Ireland, most public Masses were canceled after the government insisted that indoor gatherings of more than 100 people must not take place.

The Irish bishops’ conference said March 12 that some smaller Masses could continue during the pandemic if the congregation is limited to fewer than 100 people. It also announced that all Irish Catholics have been dispensed from the obligation to attend Sunday Mass.

In Manila, Philippines, Bishop Broderick Pabillo ordered the cancellation of public Masses from March 14-20, reported ucanews.org. His announcement followed one by Philippine President Rodrigo Duterte placing Manila in a citywide lockdown to fight the virus.

Ucanews.com reported that for those seven days, church bells in Manila Archdiocese would toll at noon and at 8 p.m. to call on all people to pray special prayers to fight COVID-19. In addition, families were expected to gather at 8 p.m. each day to pray the rosary and read the Bible.

In China, where the number of COVID-19 cases was decreasing, a bishop asked Catholics to continue to avoid public gatherings and cautioned against a new wave of unacceptable online prayer programs, ucanews.com reported.

Bishop Peter Fang Jianping of Tangshan particularly warned against the preaching of one priest, Father Fei Zhisheng, who maintains that illness is a result of sin.

“Some of the teachings of Father Fei are not in line with the Catholic faith, and everyone is reminded to stop sharing information about Father Fei,” Bishop Fang said.

Father Fei of Liaoning, in northeast China, specializes in training church ministers. In 2007, he founded a retreat group and trained preachers across the country.

WASHINGTON (CNS) — Dioceses nationwide are taking precautions to guard against the spread of the coronavirus, or COVID-19, and reminding parishioners to take commonsense steps related to hygiene in their personal lives.

Among the most common preventative measures being taken are urging reception of holy Communion in the hand, suspension of distribution of the Communion cup and exchanging the sign of peace without physical contact.

Diocesan leaders also asked people who are ill to refrain from attending Mass.

“If you are sick, stay home until you are feeling better,” Bishop David A. Zubik of Pittsburgh said in a March 2 announcement to parishioners. 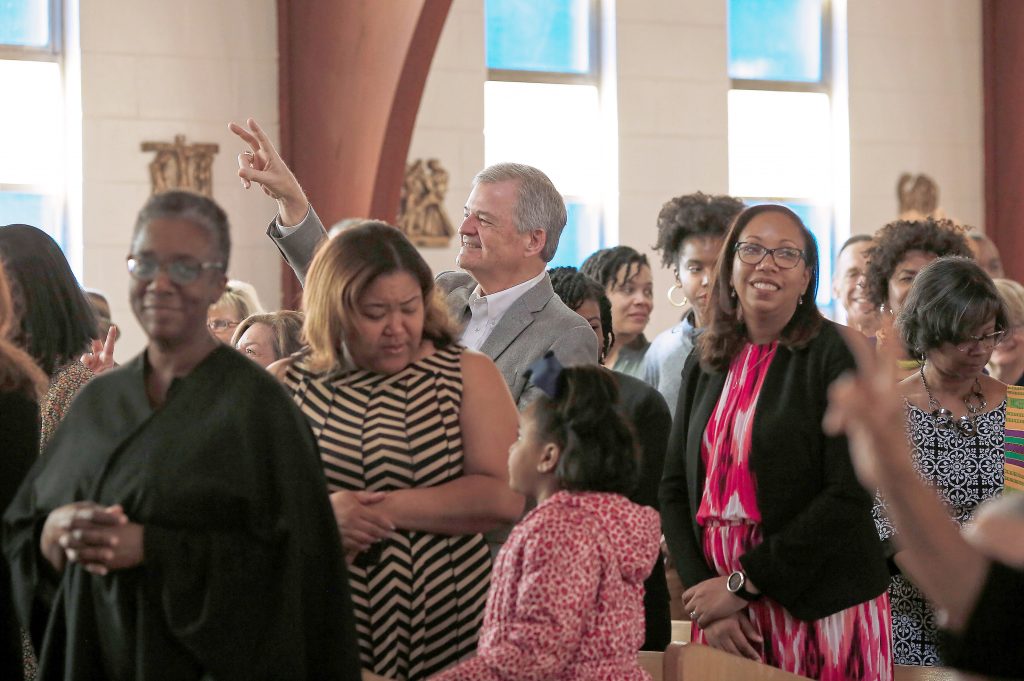 People give the sign of peace while refraining from bodily contact during Mass at Our Lady of Lourdes Catholic Church in Atlanta March 8, 2020. Amid coronavirus concerns, the Atlanta Archdiocese and other places of worship around the country and abroad have taken precautionary steps for the health and safety of congregations. (CNS photo/Christopher Aluka Berry, Reuters)

From Charlotte, North Carolina, to Honolulu, diocesan officials were implementing general steps recommended by the U.S. Conference of Catholic Bishops’ Committee on Divine Worship to limit the potential spread of illness during Mass. By March 4, the coronavirus had reached at least 75 countries including the United States; and health officials in the U.S. confirmed more than 100 cases of the illness in 15 states, including at least 15 deaths.

Worldwide by March 4, more than 94,000 cases and more than 3,200 deaths have been attributed to the coronavirus, with most in China, the epicenter of the outbreak.

At the same time, at least one bishop urged calm as people responded to the coronavirus, designated COVID-19 by world health authorities.

“Please encourage your communities during this time of uncertainty to prepare, but not panic,” Auxiliary Bishop Joel M. Konzen, administrator of the Archdiocese of Atlanta, said in a Feb. 28 memo. He said precautions preventing the spread of COVID-19 were similar to those to prevent the spread of flu.

Like diocesan officials across the U.S., Bishop Jugis encouraged priests not to extend the sign of peace, distribute Communion from the cup or invite people to shake hands in greeting at Mass or other gatherings. Those who distribute holy Communion should wash their hands before Mass and clean their hands again before and after distributing Communion, he said.

Similar precautions were being implemented in the Washington, Baltimore, Chicago and Newark, New Jersey, archdioceses and the Jackson, Mississippi, and Little Rock, Arkansas, dioceses and elsewhere. The Diocese of Fort Worth, Texas, reminded the faithful March 4 that precautions put in place Jan. 10 for the current flu season — such as suspending distribution of the blood of Christ and handshakes during the sign of peace at Mass — remain in effect.

Beyond those steps, the Archdiocese of Miami suggested that parishes empty the holy water fonts at church entrances, and it also is allowing extraordinary ministers of holy Communion who feel uncomfortable in carrying out their ministry to temporarily step down.

Among the many precautionary steps also being taken in the Baltimore archdiocese, maintenance workers will step up efforts at parishes to disinfect areas that frequently come into contact with hands, such as tops of pews.

In similar letters to priests and deacons and to school administrators, Baltimore Archbishop William E. Lori also advised they follow general guidelines laid out by the federal Centers for Disease Control and Prevention and the Maryland Department of Health, including: Wash your hands frequently with an alcohol-based hand sanitizer or soap and water for at least 20 seconds; cover your mouth and nose while coughing or sneezing; avoid close contact with people who are sick; if you are sick, stay home from work or school; and in general practice good health habits.

Guidelines from the Ohio Department of Health for dealing with contagious illnesses were reviewed in a statement shared with parishes and posted on the Diocese of Cleveland’s website March 2.

Archbishop John C. Wester of Santa Fe, New Mexico, updated liturgical practices introduced in January because of the severity of the flu season in Utah. In a March 3 statement, he mandated that holy Communion be received in the hand.

“What is important is that we receive our Blessed Lord in holy Communion,” he said. “How we receive, while very personal to the individual communicant, is not crucial. … Receiving Communion in the hand is every bit as respectful as receiving on the tongue.”

At the U.S. Conference of Catholic Bishops, Msgr. J. Brian Bransfield, general secretary, March 3 requested in an email to staff that they “refrain, until further notice, from planning any new international travel.”

He called on workers who already had purchased tickets for travel to “reconsider the necessity of the trip in consultation with your senior staff supervisor and determine an appropriate plan of action.”

Meanwhile, the Diocese of Honolulu in mid-February declined to put in place any restrictions at Mass. However, Father Pascal Abaya, rector of the Cathedral Basilica of Our Lady of Peace in the Hawaiian capital told worshippers the Communion cup no longer would be distributed, a step he called “precautionary” during flu season.

“Our local councils and individual Knights, he added, “are praying for the sick and those who have died, and we stand ready to comply with any diocesan policies that are applicable to K of C programs. The same is true of civil efforts to prevent the spread of the virus.”

Editor’s Note: Guidelines developed by the USCCB for influenza and liturgy are posted online at www.usccb.org/prayer-and-worship/sacred-art-and-music/influenza-and-the-liturgy.cfm.

Contributing to this story was Tim Swift, the social media coordinator for the Catholic Review and the Archdiocese of Baltimore.