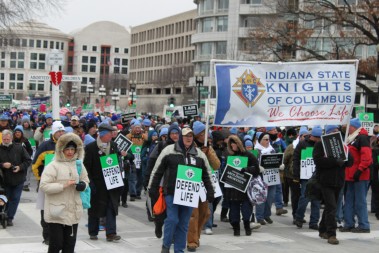 One hundred sixty-five Indiana Knights and their families from across Indiana participated in the 2013 March for Life in Washington, D.C. remembering the 40th anniversary of the Supreme Court ruling on Roe v. Wade. This marks the fourth consecutive trip to the march by the Indiana Knights. The state banner and abortion cross were prominently shown on EWTN at the rally in the Washington Mall and during the march itself.

WASHINGTON, D.C. — They arrived on multiple buses — all in an effort to stand for life in the National March for Life that marked the 40th anniversary of the U.S. Supreme Court’s decision legalizing abortion.

Although families and people of all ages participated in the national march, it has garnered tremendous numbers of young people — high schools, youth groups, college students and young adults from the Diocese of Fort Wayne-South Bend.

The University of Notre Dame’s Right to Life Club led the entire march and carried the banner. Bishop Kevin C. Rhoades marched with people from the diocese and other religious leaders. The diocesan and statewide Knights of Columbus and right-to-life organizations throughout the diocese took a stand for life.

“I was very surprised to see the number of people,” noted Maria Hite, a student at Marian High School in Mishawaka, and parishioner of Queen of Peace in Mishawaka. She estimated between 400,000 and 500,000 participants.

“Seeing everyone at the march, especially people my age, helped me to realize how important this faith for life is,” Hite told Today’s Catholic. “It also helped me see that we are truly making a difference.”

Hite said she plans to share the experiences she had in Washington and encourage others “to take a stand for life, because it is the most precious gift we have and it needs to be protected.”

The Marian student reported that 65 people from the school traveled by bus to Washington. Students from Bishop Luers in Fort Wayne and Saint Joseph in South Bend also had a strong contingency.

Saint Joseph High School Principal Susan Richter, who traveled to Washington with 157 students and 15 chaperones, said, “This gives me great hope for the future — it will be their generation that will continue this fight for life.”

“I felt a tremendous sense of pride seeing our young people supporting the march by actively participating in the rally and both of the Masses,” Richter said. “Witnessing them living their faith by living the Gospel was awe-inspiring. This confirms that our mission is being fulfilled. Our students understand their role as disciples of Christ. The passion and commitment of our students, faculty, staff and parents was wonderful. Many of our chaperones willingly volunteer to go on the march year after year. “

Bishop Dwenger student Eddie Byrne, who was one of 100 participants from the school, said, “My favorite and most reaffirming part of the whole pilgrimage was probably the youth rally Mass for Life. The entire 17,000-person congregation worshipping God in an arena where a hockey game was played the night before was so uncommon but so beautiful at the same time. The homilist, Father Carter Griffin, centered part of his homily around the fact that arenas were/are places of battle. He said we weren’t entering a physical battle, but a spiritual battle in the society we live in.”

Byrne added, “Another cool part from the Mass was Archbishop Carlo Maria Vigano’s (apostolic nuncio to the U.S.) message from Pope Benedict XVI. Knowing that the pope was fighting for life with us from the Vatican made me realize how huge this fight is in our world’s history, even if the mainstream media does not recognize it. I have no doubt that the youth of our generation will end this atrocity in our country.”

At the National Mall before the march, speakers, including those who had accounts of abortion, disabled children who were given life and adopted children made presentations.

Byrne said, “One man who spoke told the thousands of people of his adoption and his adopted family that ‘loved the heck out of (him).’ He also mentioned that of his parents’ 14 children, 10 are adopted.”

“This made me know that every child is capable of being loved, even if society tells us that a child conceived from rape or incest or one with a disability is unable to be loved because they are not ‘perfect,’” Byrne said.

Bishop Dwenger student Morgan Kinniry was impacted by those who had abortions and offered testimonials.

“I had never heard from a woman who had actually gotten an abortion and publicly regretted it because it is usually something people have shame about declaring,” Kinniry reported. “Her witness was very strong and offered an interesting perspective to her listeners because she knows first-hand how damaging and hurtful an abortion can be. Her message to us was that even though people can convince women that this is the only way out of an unwanted pregnancy, there is always the option for life.”

For Tania Wilson, the march has become a tradition. Wilson, a Marian High School freshman who attended the march with a youth group from St. Augustine Parish in South Bend, told Today’s Catholic, “While participating in the march, I came across women who once had abortions who held up signs that said ‘I regret my abortion.’ I think it’s amazing that those women went from pro-aborton to pro-life.”

“As I was walking, there were slide shows of aborted babies. I saw a reality that made me feel like I was there for all the right reasons,” said Annie Johnson, a Saint Joseph High School sophomore attending with the St. Augustine youths.

“One thing I noticed while I was walking during the march in D.C. was when they showed on a big screen how abortions look after they’re done. It was very sad,” noted James Taylor, Washington High School sophomore, who also attended with the St. Augustine youths.

“The March for Life strongly fortified my pro-life beliefs,” Morgan Kinniry noted. “I was overwhelmed by the camaraderie between myself and the other marchers. We were all there for the same cause, so it was nice to see so many other groups of people, from all races and ages, there to stand up for the unborn.”

“During the march itself, I was astounded by how many people came out to support the pro-life cause,” Kinniry added. “I was one in about 500,000 pro-lifers. During the youth rally, I was in awe to see 17,000 pro-life teens along with many seminarians, priests and bishops. Seeing and meeting so many other young people during the rally and Mass made me feel that my generation is definitely a pro-life one.”

Bishop Dwenger student Karen Eckrich was struck with the 55 million figure — the number of children who were lost to abortion in the U.S. over the past 40 years.

“A speaker at the rally put it into perspective,” Eckrich said, “and it’s about as many as the populations of the 20 biggest cities in the U.S. plus the current teenage population.”

“The amount of teenagers I saw on the march was inspiring,” Eckrich said. “I have no doubt in my mind that we will win this battle. And it doesn’t hurt that we’ve got God on our side!”

“During the march, I unintentionally became separated from our diocese group,” said Gabriell Jones, a Marian High School sophomore, who attended the march for the first time with St. Augustine Parish teens in South Bend. “I saw so many people. I didn’t realize how many people came to support the cause, so many that weren’t even Catholic.”

“As I was walking through D.C., I couldn’t help but be moved that so many people were fighting for the same cause,” said Tiana Wilson, a Marian sophomore. “It made me feel like I was doing something worthwhile. I couldn’t help but think that it’s what God wanted me to do.”