“God is blessing our diocese today in giving us these three deacons, Spenser, José and Daniel, as new shepherds through their priestly ordination. By the laying on of hands and the prayer of ordination, the Spirit of the Lord will descend upon our brothers and they will become priests of Jesus Christ, sharing in His mission to imitate and live out the pastoral charity and self-giving love of the Good Shepherd who laid down His life for the sheep.”

With joyful gratitude and these words of introduction to his homily, on June 1, Bishop Kevin C. Rhoades celebrated the witness of Deacon Spenser St. Louis, Deacon José Arroyo Acevedo and Deacon Daniel Niezer, who freely offered themselves in lifelong service to the Church and the Diocese of Fort Wayne-South Bend as men ordained to the sacred priesthood. 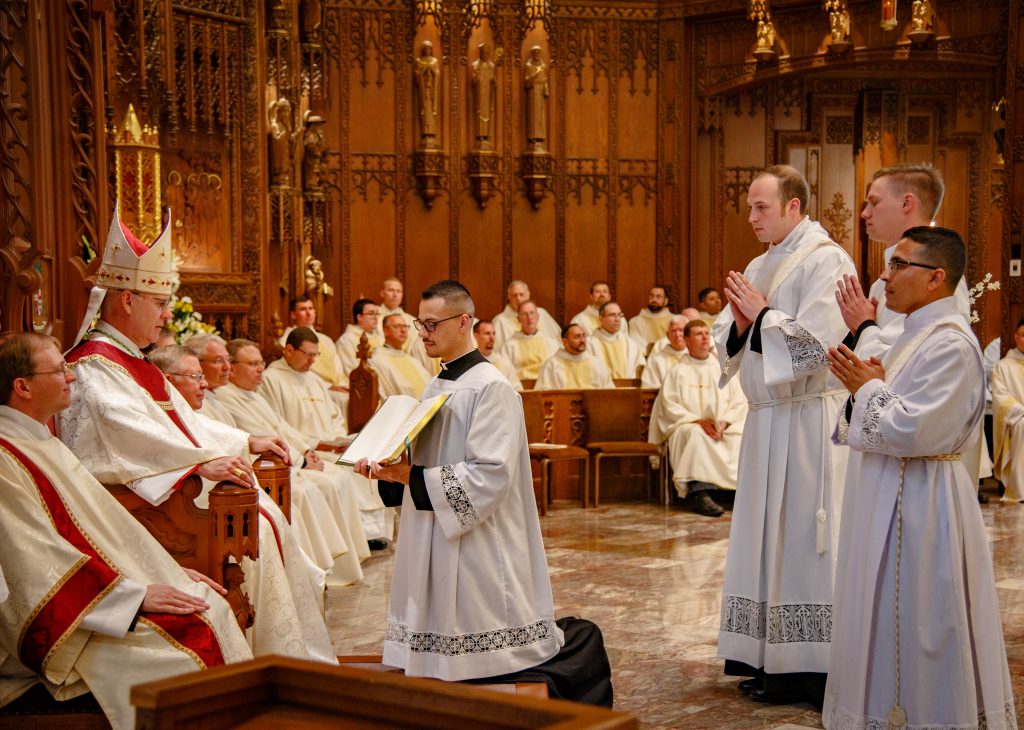 Bishop Kevin C. Rhoades asks the ordinands to declare their intention to assume the responsibility of the priesthood, and to promise obedience and respect to him and to his successors. — Nate Proulx

Emphasizing the eucharistic nature of the priesthood, the bishop explained: “At the Last Supper, Jesus anticipated His own death and transformed it into a gift of love. He made the gift of Himself present in advance when He transformed the bread and wine into His Body and Blood and gave it to His disciples to eat and drink.

“Through their ordination today, Spenser, José and Dan will become united in a singular and exceptional way to the Eucharist, entrusted with the great mystery of faith and receive the sacred power to offer the eucharistic sacrifice,” he continued. “At the altar they will exercise their priestly office in a supreme degree, and from the eucharistic sacrifice their whole priestly ministry will draw its strength.” The bishop further stressed to the men, “You are to live the Eucharist you celebrate.”

“We must not be afraid of carrying the cross, of giving of ourselves in love,” he said. “Jesus’ cross is victorious – it is the efficacious sign of the victory of love over sin and death. When we meet the Lord on the Day of Judgment, He will show us His glorious wounds and ask to see our wounds, the wounds of our love as His priests.” Bishop Rhoades emphasized that as diocesan priests, the practical embrace of the cross is lived through obedience to the Church and the renunciation of marriage, in order to be of service to all – the poor and suffering, active and inactive parishioners, and those who are religiously unaffiliated – as real, present spiritual fathers who are dedicated to the salvation of souls.

After being formally presented to the bishop, the deacons declared their intentions to assume the responsibility of the office of priesthood. They then laid prostrate, signifying the offering of their lives for Christ and His Church, as the assembly chanted the Litany of the Saints to implore the aid and intercession of heaven for them.

Following the Apostolic tradition, Bishop Rhoades then laid his hands on the head of each man, signifying that he was now “set apart” for sacrificial ministry. The many priests in attendance and concelebrating the Mass followed after the bishop in laying their hands upon the elect. Afterwards, the men knelt before the bishop as he prayed over them the Prayer of Ordination. The newly ordained were then vested with stole and chasuble, visible signs of their priestly office. Finally, the bishop anointed the palms of each new priest with sacred chrism, symbolizing wisdom and strength.

After receiving the gifts for the eucharistic celebration, the bishop handed the paten and chalice to the new priests who knelt before him, saying: “Receive the oblation of the holy people, to be offered to God. Understand what you do, imitate what you celebrate, and conform your life to the mystery of the Lord’s cross.” He then bestowed a fraternal kiss of peace upon the men and welcomed them to the diocesan presbyterate. They were likewise greeted by the priests in attendance.

After Mass, the three newly ordained priests were greeted with elation by family and friends as they offered first blessings to those in attendance. Father Daniel Niezer, who will serve at St. Vincent de Paul Parish in Elkhart, shared his experience of the Mass, expressing gratitude for those who have helped him in his journey.

“My emotions went up and down the liturgy, at one moment being overwhelmed with joy, and the next almost crying at seeing all the priests, my brothers who I am sacramentally united to now, and my parents, without whom this would not be my vocation. After the Prayer of Ordination, what had been a wave of emotion simply became a very beautiful, neutral sense of peace. Standing at the altar concelebrating with Bishop Rhoades, I remember how natural it felt and how real and fitting it was, realizing this is what I am going to be doing every day for the rest of my life. It is so humbling to see the support and love of the diocese and I’m so thankful for everything they’ve given me!”

Father Spenser St. Louis, a parishioner of St. Vincent de Paul, Fort Wayne, has been studying over the past four years at the Pontifical North American College in Rome. His parents, Scott and Tanya, said that his ordination affected them deeply.

“When he first entered seminary, this day seemed so far away, but it has come quite fast and has been so joyful!” said Scott. 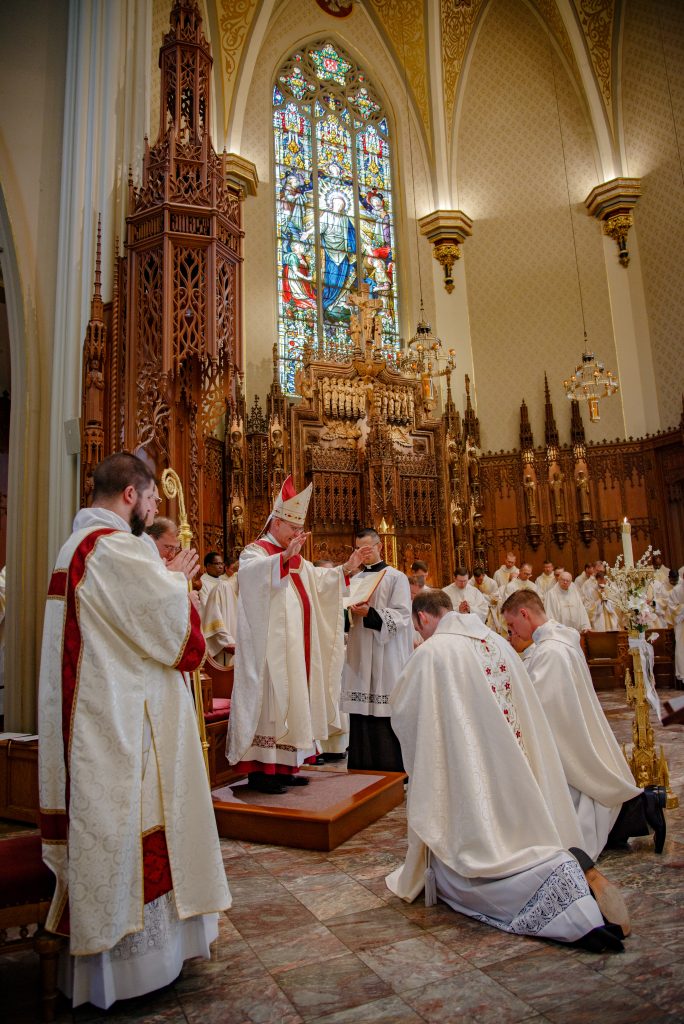 As he went forward towards the altar, there was a very real sense of realizing that he belongs completely to the Church now,” shared Tanya. “Although the feeling of offering a son to the Lord is difficult – knowing that he is no longer solely ours – it is also a beautiful participation with him in the cross.”

Father St. Louis will serve this summer at St. Mary of the Assumption Parish in Decatur before returning to Rome to complete his final year of a licentiate degree in sacred theology.

The journey to ordination for Father José Arroyo Acevedo included seminary studies and experiences in religious life before culminating in ordination at the Cathedral of the Immaculate Conception. He was accompanied at the Mass by relatives and supporters from around the world.

His mother, Milagros Acevedo, who traveled from her home in Puerto Rico, shared great excitement. “This is very special. It has been a long time, and we are all very happy and proud of Father José!” she said.

Father Arroyo Acevedo will serve at St. John the Evangelist Parish in Goshen. He also will travel to San Jose Catholic Church in Luquillo, Puerto Rico, for a first Mass at his home parish, in gratitude for the many people who supported his vocation from the beginning.