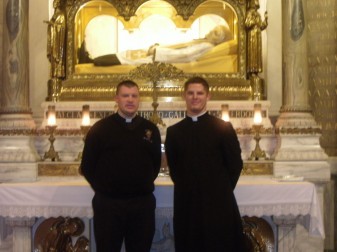 Seminarians Bob Garrow, left, and Jonathan Norton visited the tomb of St. John Vianney during a pilgrimage to France.

During fall break, many people head home, while others look for a spot to vacation. Two seminarians from the Diocese of Fort Wayne-South Bend, however, decided to join a pilgrimage to Ars, France. Jonathan Norton, a first-year theologian from Our Lady of Good Hope Parish in Fort Wayne, and Bob Garrow, a second year pre-theologian from St. Matthew Cathedral in South Bend, joined a number of seminarians from a variety of dioceses on this pilgrimage to the Shrine of St. John Vianney in Ars.

The renowned author and Marianologist, Father Frederick Miller, associate professor of systematic theology at Mount St. Mary’s Seminary in Emmitsburg, Md., the seminary that both Norton and Garrow attend, led the pilgrimage.

Arriving in Ars on Oct. 8, the pilgrims spent the next several days visiting and praying at the Shrine of St. John Vianney. St. Vianney, the patron saint of parish priests, is known for his many miracles and the great length of time he would spend in the confessional, hearing confessions for several hours a day. The pilgrims had the opportunity to learn much about this holy saint, viewing a video on his life and visiting the very rectory in which the saint had lived.

They also spent much time in prayer, beginning each day together with Morning Prayer before celebrating Mass at the altar of St. John Vianney. In addition, Father Miller gave two conferences daily, followed by Adoration of the Blessed Sacrament and Evening Prayer. As each day came to a close, the pilgrims chanted Night Prayer together in French with a group of local religious sisters. 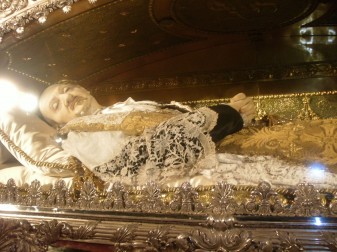 St. Vincent De Paul is shown in the photo.

Following their lengthy stay at Ars, the pilgrims traveled to the city of Paray-Le-Monial in eastern France on Thursday, Oct. 13. The city is the home of St. Margaret-Mary Alacoque of the Sisters of the Visitation, who lived a virtuous life and was favored with many mystical revelations. She was especially devoted to the Sacred Heart of Jesus and is known for having promoted this devotion throughout the Church.

While attending Mass at the Chapel of the Apparitions of St. Margaret-Mary, the pilgrims were consecrated to the Sacred Heart of Jesus before continuing their journey the next day. Prior to their departure, the pilgrims also visited the Sacred Heart Basilica of Paray-Le-Monial, an 11th century Romanesque church.

The pilgrims left Paray-Le-Monial on Friday, Oct. 14, and traveled to Paris, where they visited the following churches: the Cathedral of Notre Dame, the Church of St. Roch, the Church of St. Germain, the Church of St. Vincent De Paul and the Chapel of the Miraculous Medal. Mass was celebrated at the Chapel of the Miraculous Medal, where the Blessed Virgin appeared to St. Catherine Laboure. The pilgrims were also able to venerate relics of St. Catherine Laboure, St. Louise De Marillac, and St. Vincent De Paul during their brief stay in Paris.

On the last full day of the pilgrimage, Saturday, Oct. 15, the pilgrims were given the option of remaining in Paris or visiting Lisieux in northwestern France. Many choose to visit Lisieux, where the childhood house of St. Therese of the Child Jesus, also known as St. Therese of Lisieux, is located. St. Therese was a Carmelite Sister who has inspired many through her spirituality of her “little way,” as described in her autobiography, “The Story of a Soul.” She is the patroness of missionaries and was declared a Doctor of the Church by Blessed John Paul II in 1997.

The pilgrims also had the opportunity to pray at the tombs of the parents of St. Therese, Blesseds Louis and Zelie Martin, who were recently beatified by Pope Benedict XVI in 2008.

The pilgrims departed France on Sunday, Oct. 16, to return to Mount St. Mary’s Seminary as fall break came to a close. Seminarians Norton and Garrow stressed that throughout the pilgrimage they continuously prayed for all members of the Diocese of Fort Wayne-South Bend, especially for their own pastors. The life and example of St. John Vianney brought them to a greater understanding of the love of Jesus Christ and aided them in their discernment to that which God is calling them.