Jim Didier remembers his father, Marshall, being offered a promotion in the 1950s if he moved from his job as head meat cutter at a grocery in downtown Fort Wayne to a new store the grocer planned to open on the city’s near-northwest side.

The new store would be open on Sundays, however, which was a rarity at that time. Marshall Didier turned down the promotion.

“For Dad, working on Sunday wasn’t an option,” recalled Jim, 69, of Fort Wayne, the oldest of Marshall and Agnes Didier’s 12 children. “Sunday was the Lord’s Day and family day, and that was true in our house. … That was a powerful example to me.”

Through example, encouragement and guidance, Marshall and Agnes laid the foundation that led their now-adult children to become strong in their Catholic faith, servants in the Church and community, and successful in business and careers. As in many Catholic households in the Diocese of Fort Wayne-South Bend, the Didier siblings now are passing on that faith and sense of service to their children and grandchildren.

“Staying close to the Lord: That is all my mom and dad ever wanted us to do,” said Jim, who is music minister at Most Precious Blood Church in Fort Wayne.

Marshall died April 13 at age 97; Agnes passed away in 1993 after 45 years of marriage. Most of their children still live in the Fort Wayne area and attend area parishes.

The family’s local roots date to Thiebaut Didier, who left France in the mid-1800s and settled in Allen County, Indiana. His strong Catholic faith passed down through two more generations before being shared with Marshall and his siblings, said Jim, who remembers his grandparents and aunts and uncles as people of deep faith.

Jim and his brother Tom, 57, of Fort Wayne, said much of their early training in the faith came from their mother, who was home while their father worked long hours to support the family.

“Mom just lived it by her daily example,” Jim said.

When he walked in the house, he often saw his mother reading her prayer book or praying the rosary.

“She taught us to pray,” Tom said.

They prayed before and after meals and said prayers before bed, recalled Jim, who with his wife, Shari, carried on that tradition in their family. 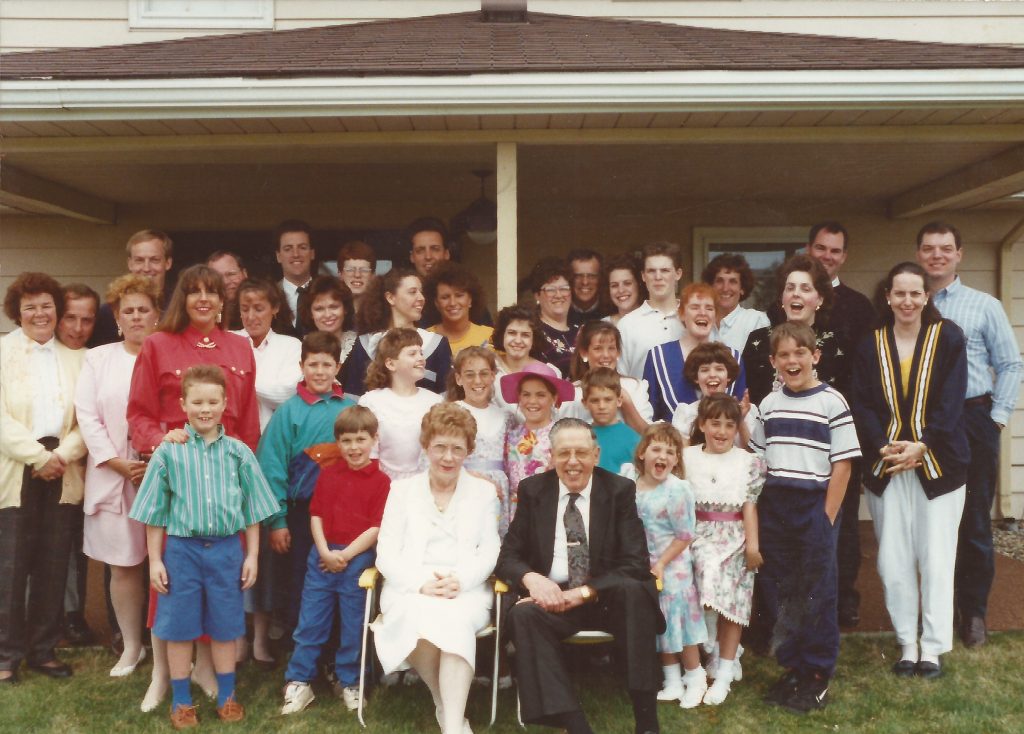 The Marshall and Agnes Didier family of Fort Wayne carries forth a tradition that effectively blends a deep and compelling faith with family, parish, business and civic life. — Provided by Jim Didier

Marshall, who also lived a strong prayer life, and Agnes weren’t strict disciplinarians, Jim said. They did have high but realistic expectations for their children and their behavior, though. The guidance helped form their children’s conscience, Tom noted.

“The one thing I got from Mom and Dad is there is a right and a wrong,” he said.

That included lessons in business ethics and in how to treat others.

“He would never try to cheat anybody to get ahead,” Tom said of his father, who opened his own meat market in 1964 and then joined with his brothers, Jim and Jack, in 1965 to operate Didier Bros. Meats.

“They taught us to respect different nationalities of people,” Tom said of his parents. “You didn’t mistreat or judge people based on race or creed or where they were from.”

“My parents were thoughtful and kind to everyone no matter their path in life,” said Christine Didier-Coffman of Fort Wayne, the youngest Didier sibling. “They would speak their thoughts but in a constructive and respectful tone, never condescending nor to belittle.”

As the youngest, Didier-Coffman said she also learned a lot about faith from her older siblings, who had begun to leave home, marry and start families by the time she reached middle and high school.

Their faith and devotion “is demonstrated in their work and how they treated other people,” she added. “I do feel especially grateful for this and a strong connection to all of them.”

She and her siblings also learned self-sacrifice. Skipping Mass wasn’t an option, and the family always ate meals together, including huge breakfasts on Sunday mornings, Jim said.

“If I heard, ‘Offer it up,’ once, I heard it a million times,” he recalled of his mother, who encouraged her children to make life’s inconveniences an offering to God.

Their mother also liked to say, “God helps those who help themselves,” and “All things in moderation,” Christine said.

In addition, Marshall and Agnes urged all of their children to use their God-given talents.

The family attended Cathedral of the Immaculate Conception Parish in Fort Wayne, where Marshall and Agnes sang in the choir — Marshall for more than 60 years. Their sons were altar servers and also read Scripture as lectors at Cathedral School Masses, Tom said.

Tom became a cantor, a role he continues today at St. Vincent de Paul Parish in Fort Wayne. He also sings at other parishes, weddings and funerals.

“I knew I could use singing to glorify God,” said Tom, who also has served since January 2004 on Fort Wayne’s City Council.

Along with singing and playing music at church, Jim taught for 27 years in Fort Wayne Catholic schools and at the University of Saint Francis. Among other siblings, Phil is a lector at the catheral and teaches foreign language at Bishop Dwenger High School, Tim and his wife, Janet, are euchartistic ministers at St. Jude Parish in Fort Wayne. He operates a local meat business. Jeanne Kawiecki is director of music and liturgy at Our Lady of Good Hope Parish in Fort Wayne. Other siblings use their gifts in career fields such as environmental protection and insurane or by treating others with a talent for cooking, Jim said.

In all they do, the Didiers build on their parents’ legacy of love of God, selflessness and concern for others.

“I carry this forward,” Christine said, “and each day make a concerted effort to pay this forward in all that cross my path, whether my husband, two sons or the people that come into my life each day.”