CNS — A few weeks before Christmas, Jessica Moreno and her three kids were able to move from her parents’ home in Wood Dale, Illinois, outside of Chicago, to their own apartment a few blocks away.

“The apartment was heaven sent,” she said. “I was looking at homelessness. I can’t imagine being in that situation with three kids in the winter.”

Moreno, 34, who works part time as a paralegal, credits the $750 a month she received under the enhanced child tax credit program for allowing her family to make the move.

Since the pandemic began nearly two years ago, Moreno had worked irregular hours as courts closed and the need for legal work slowed. She and her children moved into her parents’ “tiny, teeny house.” It was crowded, but everyone sacrificed so no one would be out on the streets.

Moreno learned about the program and worked with case managers at Catholic Charities of the Diocese of Joliet, Illinois, to file the paperwork to receive the enhanced child tax credit each month from July until December, when the program ended. She credited the agency for its never-ending work on her case. 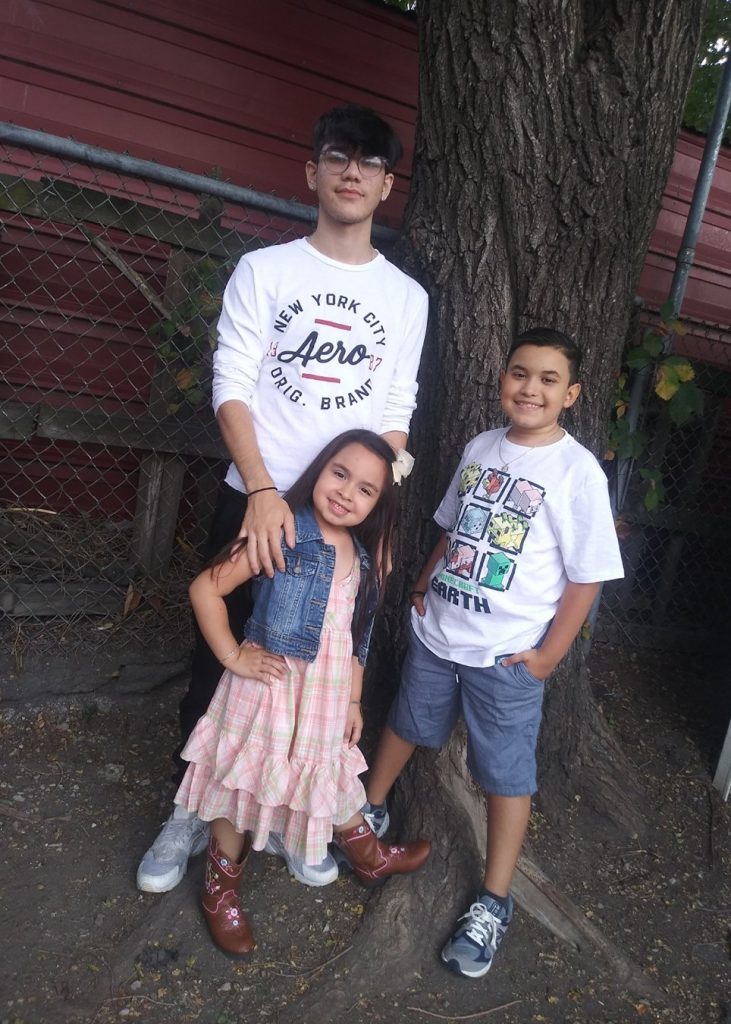 The children of single mother Jessica Moreno of Wood Dale, Ill., Julian, 16, Jenesis, 6, and Jayden, 12, are seen in an undated photo. Moreno used a series of $750-a-month checks under the expanded child tax credit program to rent an apartment for herself and her children and avoid becoming homeless. (CNS photo/courtesy Jessica Moreno)

The expanded child tax credit program was enacted in March under the American Rescue Plan. It was the most recent measure in a series of legislative efforts to pump money into the economy in response to the financial downturn caused by the onset of COVID-19.

The expanded tax credit covered 2021 and called for families with children to receive six monthly advance payments rather than wait to claim the credit on their annual tax return. The provision raised the credit to a maximum of $3,600 for children younger than 6 and $3,000 for children 6 to 17. The previous credit was capped at $2,000 per child. Significantly, the credit became “fully refundable,” meaning that children in families with the lowest incomes received the same amount as children in higher families.

More than 61 million children in more than 36 million households benefited from the credit, according to a study released Dec. 22 by the Center on Poverty and Social Policy at Columbia University. The monthly payment in November alone kept 3.7 million children out of poverty, the center found.

Before the expansion, 27 million children – including about half of Black and Latino children and half of children living in rural communities – received less than the full credit or no credit because their families’ incomes were too low.

Moreno said the monthly advances under the expanded child tax credit improved her family’s life. “I was able to do more things for the kids, get them school supplies, pay for a few things, saved some for an apartment and pay some bills. I don’t think I would have been able to do any of that without those checks,” she said.

However, the advance payments ended in December. While she will be able to claim an additional amount of the credit on her federal tax return due April 18, she’s expecting that making ends meet now will be more difficult.

(Tax Day is usually April 15, unless it falls on a weekend or holiday, as it does this year, so it’s been pushed to the next available business day.)

Moreno decided to share her story with Catholic News Service in an effort to convince the U.S. Senate to enact President Joe Biden’s Build Back Better Act, which includes a provision to extend the expanded credit through at least 2022. The House of Representatives narrowly approved the bill in November.

Catholic agencies and anti-poverty advocates are calling on the Senate to enact the bill, saying the enhanced child tax credit strengthens families and reduces poverty.

Presentation Sister Richelle Friedman, director of public policy at the Coalition on Human Needs, said she feared that failing to extend the expanded tax credit would cause millions of children to fall back into poverty. “We’re working really hard to ensure that the kids eligible for the expanded child tax credit are getting it,” she said.

A letter last Sept. 7 from the chairmen of five U.S. Conference of Catholic Bishops’ committees to members of Congress specifically cited that the long-range future of the country is “intimately linked to the well-being of families” in urging that the enhanced credit be made permanent.

Officials at Catholic Charities USA, including Anthony Granado, vice president of government relations, are working with senators to move the tax credit forward as part of the Build Back Better Act.

Granado said the expanded child tax credit has been “essential for families who lost jobs, for low-income families, for people who don’t get to work from their laptops (at home), working-class people who cannot afford child care.”

Diocesan Catholic Charities agencies are part of the drive to ensure that the tax credit continues at least through 2022, Granado said. The legislation is stalled in the Senate.

Sen. Joe Manchin, D-W.Va., who is Catholic, has wavered on his support for the bill and has raised questions about a tax credit that does not include a work provision. In the chamber with 50 Republicans and 50 Democrats, Manchin’s vote is needed to approve the measure, allowing Vice President Kamala Harris to break the tie.

Manchin’s office responded with a brief email to a CNS inquiry to discuss the bill: “Senator Manchin has always supported the child tax credit and would like to see it targeted to those families who need it most.”

Laura Peralta-Schulte, senior director of public policy and government affairs at Network, a Catholic social justice lobby, said efforts are underway to reach out to Manchin to better explain how the credit “is a transformational policy” that has eased the stifling effects of poverty. She pointed to findings from the Columbia University study that shows people have used the payments for everyday needs including food, bills, clothing, school expenses and rent or a mortgage.

“There’s so much discussion about the dignity of families. The data shows that government can play a role alleviating poverty and when people get resources they actually use them for the essential needs,” Peralta-Schulte told CNS.

As the lobbying continued, Moreno returned to work Jan. 13 after she and her daughter dealt with illness from COVID-19 for nearly two weeks. Her sons moved back in with her parents during the ordeal. Now she is focused on keeping her family housed and in school. She is looking for a better paying job that offers more hours while she contemplates a return to classes to finish a college degree at Governors State University, a 95-mile round trip from Wood Dale.

Financially, it’s a struggle, Moreno said. “The $750 would be helpful.”