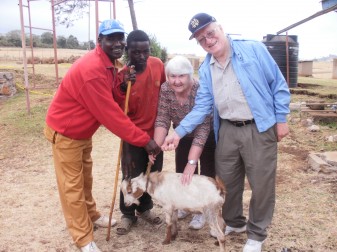 Jerry and Lillian Smith receive a gift of a goat from Kitete parishioners.

GRANGER — For Jerry and Lillian Smith of Granger, a recent September visit to see Jerry’s brother, Holy Cross Father Tom Smith, in East Africa, is something they will not soon forget.

“Much poverty exists in East Africa,” said Jerry Smith in an email to Today’s Catholic. “Missionaries there work with poverty-stricken families and are truly performing a wonderful service for these children of God.”

Despite the problems, however, the Smiths observed that those in poverty seem to be very happy people.

Smith said the prominent religion among the Christians is Catholicism.

“Churches are often full on Sundays and feast days with women and children and a few men,” Smith noted. “Many of the men do not attend liturgies, which usually last for around two hours on Sundays.”

When describing the Masses, Smith said, “The people love music, and Church liturgies on Sundays and feast days include much singing and dancing, more often by the children but occasionally by the women.”

“Generally, many are uneducated, without electricity, without vehicles or other means of transportation, and without home phone service,” Smith said. “The cell phone business really prospers.”

Smith said most homes of the impoverished are with thatch or tin roofs with walls made of manure and sticks — the better ones — with mud and sticks. Some of the homes also have an outer coating of cement. 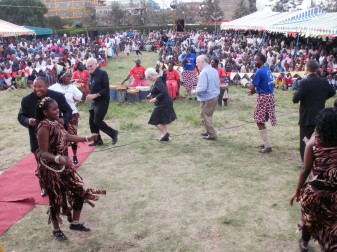 Holy Cross Fathers Andrew Massawe, the Dandora pastor, David Burrell and Pat Neary, along with Lillian and Jerry Smith, dance in a circle at the feast day celebration for Dandora Parish.

Some of those living in various degrees of poverty, according to Smith, have shops along the roads, usually quite a few next to each other, most of which are without lighting, appear to be quite dilapidated, dark and unclean, without flooring of any kind and with dirt or extremely dusty clay as their base.

“Generally all side roads and many of the main roads are very difficult to travel on,” Smith said. “It is virtually impossible to explain how bad the roads actually are.”

There is nothing that he is aware of in the United States, which can even come close to comparing how bad the dirt- and clay-based roads in East Africa actually are.

Traffic, especially in the cities, can be horrendous. “There are vehicles, motor bikes, bicycles, animals and people all competing for space on many of the roads,” Smith added. “Virtually all of those in severe poverty walk everywhere as they have no money to purchase other means of transportation.”

Smith said most of the impoverished live off of the land and their animals.

“You see cattle, sheep and chickens everywhere, with many families owning one or a few cows or sheep, often tied down on the side of the roads,” he said. “They try to fatten the cattle and sheep up and then sell them. They cannot eat them as they have no means of refrigeration.”

He added, “Very often you also see young boys or men shepherding flocks of cattle and/or sheep, which they are moving along the roadsides and pastures, trying to find grass for them to eat. Driving around them can be very tricky as they often make their way on the roads.”

Farming is another business frequently labored by those in poverty, Smith noted. Banana  groves, charcoal, coffee, tea, chickpea, corn, wheat and various other grains are raised in several of the countries wherever conditions are favorable for growing. Water can be extremely scarce and is a real concern for many who are attempting to farm and grow crops during the dry seasons.

Smith, who has been speaking to members of the Serra Club and religious within the Congregation of Holy Cross, offered the following recommendation: “All who can afford to travel to impoverished areas in East Africa should do so, especially those of us who have been given much in material gifts by Our Lord.”

“It is so moving to experience the life styles of those living in poverty in Africa, to see how happy these people appear to be and how warm and loving they are,” Smith said. “They have so little in material things and yet seem to be so much at peace with their life’s burdens. One has to wonder whether in the whole scheme of life they really are the more fortunate children of God.”