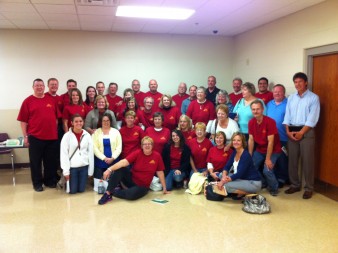 St. Mary of the Assumption in Decatur had a group of near 40 parishioners attend the ARISE Leaders Training session at St. Elizabeth Ann Seton in Fort Wayne on Thursday, Sept. 20. It was the largest group to turnout for the meeting. St. Mary’s has a record number of 38 groups participating in the ARISE Bible study that started on Oct. 7. Father David Voors is pastor of St. Mary Parish.

DECATUR —  All across the diocese, small faith-sharing groups are half way through the first season of the ARISE process.

Last winter, Bishop Kevin C. Rhoades encouraged all parishes to participate in the program and 68 (or 85 percent) of parishes answered the call. Sessions for Season One began the week of Oct. 7 and will run for six weeks ending the week of Nov. 11.

In Decatur, members of St. Mary of the Assumption not only answered the call but said “yes” in mass numbers. Of the 1,300-plus families who belong to the Adams County parish, over 400 people are growing in their faith through ARISE.

Lori Miller, a member of the formation team at St. Mary’s was thrilled with the overwhelming response. “We thought 300 participants would be a miracle,” she told Today’s Catholic.

Miller attributed the success of the program to the encouragement from both Bishop Rhoades and Father Dave Voors. “Father Dave pushed it (ARISE) and it was really emphasized that Bishop Rhoades wanted everyone to join,” Miller said.

Miller and nine other teammates from her parish started preparing and meeting in February 2012. In September training workshops titled, “Small Community Leadership Formation” were held at three different locations across the diocese with 634 total attending. The St. Mary’s team rounded up over 40 leaders who had agreed to take on the role of facilitator for a small group and attended the session held at St. Elizabeth Ann Seton in Fort Wayne. The enthusiastic members wore matching T-shirts and outnumbered all other parishes in attendance.

After their training, St. Mary’s formed a record number of 38 groups ranging in size from three to 17 members which include two youth sessions and are offered on every single day of the week.

“It was important for us to accommodate everyone’s schedule who had an interest. We did not want to turn anyone away,” explained Miller.

Miller was especially moved by the joining of an older woman in the parish. “She originally said she did not think she needed ARISE at her age, but we convinced her that others may ‘need’ her. Then she talked her sister into it too and now they both love it,” Miller said.

Kathy Coonrod, coordinator for St. Louis Besancon Parish added, “We were elated with our response from sign up Sunday. We have over 100 people meeting in 11 different groups.”

St. Elizabeth Ann Seton team member, Denise Meyer, who is part of a couples’ group on Sunday nights echoed, “It is an awesome program.”