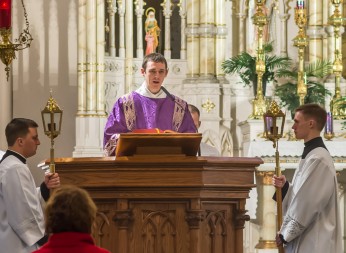 FORT WAYNE — Deacon Zak Barry has been preparing for the day of his Ordination to the Priesthood for many years with prayer and study. But he knows Jesus is in charge. “Only Jesus knows what I need in preparation for ordination, so my prayer has been opening myself up to Him and asking that He work in me so that I will be able to receive the graces I need in ordination,” he says.

A Fort Wayne native, Zachary David Barry is the eldest of the six children of Vincent and Rebecca Barry, parishioners of Our Lady of Good Hope Parish. He received his elementary education at St. Charles Borromeo School and graduated from Bishop Dwenger High School in 2006.

Growing up in a close-knit Catholic family, Deacon Barry credits his parents for his deep, enduring faith. “The first and grounding influence on my formation in the faith came from my parents. They formed my prayer habits early in life, taught me the importance of attending Mass, and gave me countless examples and lessons on living a life focused on the Lord,” he says. He holds dear the memories of attending Confession with his father on Saturday mornings, and the early morning bike rides he and his mom took to attend daily Mass together.

He notes, “And throughout seminary, as I learned more about the faith and grew closer to the Lord in prayer, my relationship with my parents — both the love and support they had shown me and the way I had seen them interact with each other — helped my understanding of the mysterious love, which God has for us, and the way in which we are called to return that love.”

He also merits the indispensable role of the priests of his youth and his religion teachers in his faith formation and spiritual growth.

Deacon Barry recalls while in grade school his call to the Priesthood. “I first heard the Lord’s call in sixth grade, during a talk one of the parish priests was giving to the class on vocations. His words, ‘Some of the men in this room may be called to be priests,’ sank deep into my heart and took up root there,” he says, adding, “My response to the call was to be open, to continue sharing and asking and listening in prayer, with trust that He would see to it that I found the right path — a trust that kept me from worrying about what my future would be and freed me to focus on growing in holiness not in the future but in the present.”

Deacon Barry was accepted into the seminary by Bishop John M. D’Arcy after high school graduation and spent the next four years studying philosophy at Immaculate Heart of Mary Seminary in Winona, Minn. Following graduation from seminary college in 2010, Deacon Barry transitioned to Mount St. Mary’s Seminary in Emmitsburg, Md., to study theology.

Seminary life has been a lesson in balance for this soon-to-be ordained shepherd of the Church. “Study is a large part of seminary life, but so is spiritual growth — especially prayer and the sacraments. Human formation also plays a key role, meaning seminary recognizes and teaches the value of being a good Christian man,” he says, noting that fraternity is important as well. “We are helped to develop our human virtues and encouraged to spend time together rather than burying ourselves in books and prayer all day, as important as they are.”

Seminary life provides opportunities to understand and practice service as well. “Seminary forms men to have a pastor’s heart, ministering to needs in the community by making visits to nursing homes and hospitals, helping in the schools, visiting prisons and helping in a parish,” he says.

Deacon Barry’s summer assignment experiences have been invaluable to his future ministry as priest. “The summers I’ve spent in the parishes (St. Elizabeth Ann Seton, Fort Wayne, St. Vincent de Paul, Elkhart, and St. Michael, Plymouth) were crucial points of my formation and discernment, because it was there that the Lord was able to confirm His call in my heart,” he says, adding, “ I haven’t been more happy than I have been working in a parish.”

Deacon Barry was ordained into the diaconate by Bishop Kevin C. Rhoades on May 25, 2013, at the Cathedral of the Immaculate Conception in Fort Wayne. Now, a year later, as he waits the glorious day of Ordination to the Priesthood he cherishes his family’s support. “My family has been amazingly supportive! They are all exited for me, and my youngest sister Gianna is especially excited to make her first Communion at my first Mass of thanksgiving,” he says enthusiastically.

As for his priesthood ministry, Barry offers a spirit of openness and says, “What am I bringing to the Priesthood? Myself, whole and entire, my gifts and my weaknesses. I’m bringing a spirit open to guidance and correction and a heart seeking the Lord and to draw others closer to Him.”

Following ordination, Deacon Barry looks forward to celebrating the sacraments, especially the holy sacrifice of the Mass and Confession. And as he looks forward to “being in the parish, surrounded by the people of God and ministering to them,” where he knows he will “need God’s grace the most,” this humble servant of God says he is most excited about “being Christ to others — something I’m not worthy of and not capable of without extreme grace. But that is exactly what He’s offering me.” 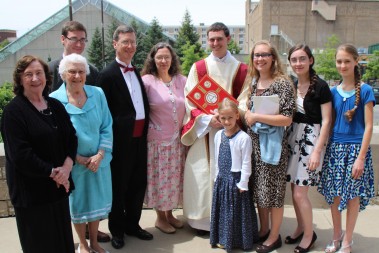 The Barry family is shown on the plaza of the Cathedral of the Immaculate Conception in Fort Wayne at the diaconate ordination of Zachary Barry last May.

FORT WAYNE — When Zachary Barry is ordained a priest by Bishop Kevin C. Rhoades on Saturday, June 7, at Immaculate Conception Cathedral in downtown Fort Wayne, his loving family will witness the culmination of years of study, prayer and discernment.

Zak’s mother Rebecca told Today’s Catholic, “We first sensed Zak had a vocation to the Priesthood when he started talking! He is a born philosopher; when he was young, all his teachers said he was a deep thinker.”

And when he requested a breviary, a book containing the divine office of the Catholic Church, for his 18th birthday, so that he could pray the Liturgy of the Hours each morning, they were convinced he would pursue a religious vocation.

Zak’s parents are “cradle Catholics” and provided loving support for his decision, along with brother Greg, sisters Victoria, Madeline, Miriam and Gianna and extended family members, which include at least one priest and a religious sister. A large and joyful family contingent is expected to be in attendance for his ordination.

The Barry family attends Our Lady of Good Hope Parish in Fort Wayne where Zak was a faithful altar boy throughout his years at St. Charles Borromeo School and Bishop Dwenger High School.

Those encouraging and inspiring him during those formative years included Msgr. Edward Hession and other priests at St. Charles, as well as teachers and lay people who “lived their Christian vocation joyfully,” said Rebecca.

The oldest of the Barry children, Zak entered seminary training immediately after high school and obtained an undergraduate degree in philosophy from Immaculate Heart of Mary Seminary in Winona, Minn., then graduate degrees in divinity and theology from Mount St. Mary’s Seminary in Emmitsburg, Md.

It’s all about Catholic family for the Barrys. Zak’s father Vince said, “I want all of my children to find their true vocation and to develop and use their God-given gifts to serve His Church and thereby to achieve happiness. Zak’s ordination is the gateway to him fully living his vocation. It certainly will be a more unique blessing to our family than a child’s wedding and affect our family celebrations in ways we have yet to discover.”

Rebecca shared a mother’s perspective. “A priest in the family will be a special blessing, as well as a special cross for us. We have the happy burden, all of us as Catholics, to pray for our priests, bishops and Holy Father, as they lead us in our culture that is so hostile to Christ and His teachings. Our family will have an ‘extra’ share in that support of priests.”

“I feel privileged to have Zak for a son,” she said, “and feel he will be a blessing for his ‘new’ parish family, as he has been in our own family.”

As Zachary Barry receives the sacrament of Holy Orders from Bishop Rhoades on the day of his ordination, he will surely sense the love of family that surrounds and envelops him and, along with God’s divine presence, strengthens him for his priestly journey.