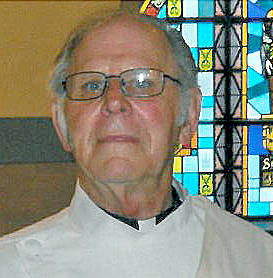 The first married deacon in the Diocese of Fort Wayne-South Bend, Deacon Ervin Kuspa, passed away on May 10. Ordained in 1971 by Bishop Leo A. Pursley, he served at St. Adalbert, St. Anthony de Padua and Our Lady of Hungary parishes, all in South Bend.

Though health issues compelled him to retire from the diaconate in 2014 after 43 years of service, Deacon Kuspa “hated when he had to give this up,” his daughter Debbie Kuspa stated of his ministry of service.

He was very involved in both his faith life and his community. Among other things, Deacon Kuspa led a Boy Scout troop, was active in the St. Vincent de Paul Society, the Holy Name Society and Knights of Columbus, along with the American Legion.

Aside from his duty to the Church, Deacon Kuspa managed the paint department at Sears and later retired from the South Bend Water Works. He and Veronica Kuspa, his wife of 64 years, had three children together, three grandchildren and two great-grandchildren.

Deacon Kuspa was proud of his Polish heritage; he played Polish music after Sunday dinner with the family and was known as “Dziadzia” to his three grandchildren. He served 12 years in the U.S. Army during the Korean War: Debbie stated that he “saw so much death, he wanted to help people.” That was what led him to the diaconate, though becoming the first married deacon in the reinstituted permanent diaconate was not always an easy path to pave.

His dedication to the calling had always been strong. Deacon Kuspa quit his job to pursue diaconate studies at SS. Cyril and Methodius Seminary in Orchard Lake, Michigan, northwest of Detroit. During those two years his wife remained in the South Bend area with their three children, though Debbie recalled that he came home to visit every weekend. As a deacon, he started a Bible course at Our Lady of Hungary that continued for 20 years and was like “another little family for him.” She remembered that he often came late to family events because of his many obligations.

Love of family was foremost for Deacon Kuspa. When his grandchildren came to visit, they would head straight for the basement — grandpa’s “cave” — and spend hours playing with him and watching him draw pictures of Army trucks and fire trucks. One grandchild even became a firefighter.

As they grew older, the they would ask him to preside over their weddings and baptize their children. “My niece would always say ‘I’m the only one who can say that Dziadzia baptized me, gave me first Communion, helped at my Confirmation and I was married by him, and he baptized my son.’”

He was greatly loved in return. Debbie shared how she discovered scrapbooks full of thank-you notes and letters from schoolchildren, friends and parishioners whom he had helped through the years. She believed that families often came to him because he related so well to the troubles of married and family life.

He taught religion at Marian High School, Mishawaka, and St. Adalbert. Debbie related another story from when she was young and someone came to the door late on a Friday night: It turned out to be a handful of Marian football players who had simply wanted to talk to Deacon Kuspa.

A deep devotion to St. Padre Pio marked the life of Deacon Kuspa. Even when life was difficult for the family, he always told them, “God will provide for us; He will always take care of us.”

Veronica passed away in November. “He was ready to go be with her,” Debbie said.

Surrounded by family at his South Bend home, Deacon Kuspa peacefully went to his final reward. His funeral service took place on May 15, the same date as his ordination to the Sacred Order of Diaconate.