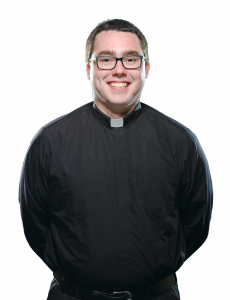 A native of Fort Wayne and lifelong parishioner of St. Vincent de Paul Parish, Deacon David Huneck is “excited for his upcoming ordination and looking forward to start being at a parish,” he said. He has moved around every three months for nine years, and is hoping to find stability and to learning to love God’s people in parish life.

Deacon Huneck is the son of John and Becky Huneck of Fort Wayne. He has two siblings: an older sister, Amanda, and a younger brother, Phillip. He just graduated with his master of divinity degree from Mount St. Mary’s University in Emmitsburg, Maryland, and said that his past year there, since his diaconate ordination, has been good: He has been enjoying his new role in the Church, baptizing, giving homilies at Mass and preaching.

Deacon Huneck’s pastoral ministry was with college students in Campus Ministry at “the Mount,” where he led the RCIA as well as retreats. He also preached on a weekly basis during the campus Masses. A highlight of the year was traveling to the Holy Land over Christmas break with his other seminarian brothers. “We visited every holy site in the mysteries of the rosary, except one.” With a smile, he explained that he was looking forward to the coronation of Mary in heaven one day.

His final year of seminary education focused on many of the upcoming priestly roles he will be offering. He and his fellow deacons studied a variety of sacramental theologies and the celebration of the Mass. One of his favorite classes was “Pastoral Integration” taught at the Mount by Msgr. Michael Heintz of the Diocese of Fort Wayne-South Bend. A seminar-based course, they discussed many of the important real-life, pastoral issues that a new priest might encounter in his ministry.

Deacon Huneck’s everyday prayer life focuses on Jesus, especially by praying in front of the Blessed Sacrament — “our fuel, so we can be sent back out” to minister, he said. Deacon Huneck attends daily Mass as well, to deepen his relationship with God. The saints for which he has a special devotion are St. Joseph, St. Sylvester and St. Januarius, with whose relics he prayed devoutly one time.

His call to the priesthood began with the positive example of other priests as he was growing up. Especially as they administered the sacraments, he appreciated “the witness of many joyous priests, especially Father Jason Freiburger at Bishop Dwenger High School, Father Mark Gurtner and Msgr. John Kuzmich at St. Vincent. Even though it was a large parish, he knew the families and loved everybody. He was a shepherd for everyone.”

As a senior in high school in 2008-09, Deacon Huneck started first seriously considering the priesthood. He studied broadcast journalism for two years at Ball State University, then chose to answer God’s call and enter the seminary. Laughing, he explained how he didn’t get to always play organized team sports but loved announcing them, something he still enjoys and does once a year at the Cupertino Classic basketball rivalry game played between the seminarians and priests of the diocese.

His greatest love will be found in his future service to God, he said, as he ministers to God’s people. He is looking forward to meeting families and “having dinner at parishioners’ homes and being able to enter into their lives.”

An extrovert by nature, he said he feels refreshed by spending time with his brother seminarians, family and friends. He is open to God’s will and to wherever he is placed, as he learns to love in greater and greater ways every day.