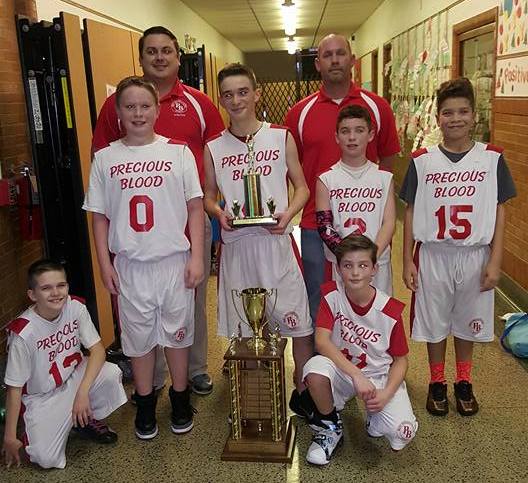 Recipients of the Derk Hinsey traveling Christian Attitude trophy were St. John the Baptist, New Haven, for the girls and Most Precious Blood, Fort Wayne, for the boys.

FORT WAYNE — Over the break from classes between Christmas and New Year’s, a whole slew of seventh- and eighth-grade Catholic Youth Organization (CYO) basketball teams and a few other area middle school squads saw action at the 2015 Hoopsfest at the University of Saint Francis. This year’s showcase, which first started in 1995, yielded 42 games and featured three USF alums now in a coaching role: Michelle Nolan from Most Precious Blood and twin sisters, Malissa Keane and Machelle Fuelling of Wyneken Lutheran.

St. Charles breezed through the seventh-grade boys’ tournament getting by St. Elizabeth and St. Jude and doubly eliminated a tough group from St. John the Baptist, New Haven, for the championship. The St. Charles eighth graders also had an impressive run climbing their way out of the losers’ bracket after an opening loss to the eventual champions, Holy Cross. Along the way back to the championship, they beat St. John, New Haven, Most Precious Blood, St. John the Baptist, Fort Wayne, Wyneken and St. Vincent 7, before losing to the Crusaders once again, 28-40.

In the girls’ brackets, the seventh-grade Lady Raiders from St. John the Baptist, New Haven, won it all beating a scrappy group from St. Therese two times at the end for the championship, 30-19 and 24-13. The determined group went undefeated and was led in scoring during the tournament by Rachel McCarthy, Miah Henry, Jasmin Myles, Kristen Wharton and Kayla Johnson. Helping out on defense was Mady Minick, Leah Pranger, Olivia Cook, Malory Fox and Auriana Molina. 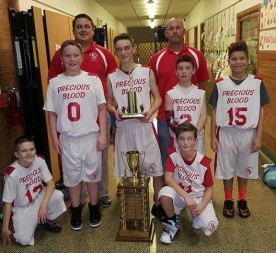 A pleased Coach Karen Fox explained, “No matter the amount of time on the court, each girl gave 110 percent for the team to help secure the victories. It was a team effort.”

She added, “Not only did the girls play hard, but they also demonstrated great sportsmanship. We loved hearing our fans cheer for us!” Looking forward to the rest of the regular season, the coaching staff feels sure the girls will continue to grow, not only as athletes, but also as outstanding young Catholics.

For the eighth graders, St. Elizabeth had a great showing coming out of the losers’ bracket after losing to Wyneken Lutheran, 18-35, in the second round. The Pioneers battled their way back beating Central Lutheran, St. Vincent and St. Jude to face the Warriors in the championship game, led until the very end, but came up just short, 28-31. In the tournament, assistant coach Devon Davis reported that St. Elizabeth had a balanced scoring attack with Lydia Reimbold and Kennedy Glenn leading the team offensively averaging 10 points per game and Lauren Davis scoring a season-high 11 points against St. Jude. Because they had several out of town from their normal roster of seventh and eighth graders, the Pioneers brought up two sixth graders for the tournament.

Davis concluded, “Our team played some of its best basketball so far this season.”

Each year parishioner Derk Hinsey of Bad Dad Motorcyles sponsors a traveling Christian Attitude trophy. Based on a team whose coaches and players display the best overall sportsmanship and a noticeable Christian attitude, the votes are placed by referees. This year’s recipients were St. John, New Haven for the girls and Most Precious Blood for the boys.

In the boys’ bracket, St. Vincent was victorious beating St. Charles for the championship 47-45. The Panthers claimed the rights of cutting down the net after going undefeated in the nine-team, double elimination, holiday-break marathon.

Most Precious Blood came in third place. Started in 1991, this year’s girls’ champion was St. Charles 6. They downed runner-up, St. Vincent 6 in the final game, while St. Charles 5 was the third place team.

SOUTH BEND —Fans made their way to Saint Joseph High School to experience the matchup of teammates on the gridiron but rivals on the hardwood as the Trojans of Holy Family hoped to claim the day over the Corpus Christi Cougars.

The Cougars had a perfect record and had been led by Derek Derda, their quarterback on the grass who changed roles and was no longer throwing passes, but was instead catching them from a talented guard Braden Kaniewski.

Holy Family had stumbled a couple of times but entered the contest confidently against their former comrades boasting a trio of capable guards — Ky’Rell Franklin along with brothers Ryan and Riley Hessey. The Trojans got on the board early with a nice dribble drive by Ryan Hessey in which he scored a three-point play the old-fashioned way but was countered quickly by a Derda putback, a play that would soon haunt the west side squad.

The Corpus Christi big man soon displayed an uncanny knack for grabbing the offensive glass and finishing with a two-footer to keep the Cougars in the game.

In between some serious razzle-dazzle from Franklin, he would find the Trojans’ center, Roberto Miramontes for three layups of his own to counter the Cougars.

The first half became such a track meet that when the official called a foul and handed off the ball to the would-be shooter and said rest, the players had a sigh of relief about them.

The baskets poured in as the half ended with a 21-21 tie thanks to a buzzer beating layup from Cougar Hunter Holmes.

The second half started out with the same vim and vigor as the first as Ryan Hessey and Franklin bombed in a couple of threes followed by more put backs and layups from Derda and a shot from behind the arch by Kaniewski pushed the lead to six by the Cougars, 33-27.

The nearest the Trojans would come after that was a conventional three-point play by Franklin cutting the deficit in half, but then it became the tandem of Derda and Kaniewski, who scored 23 and 10 respectively, and the defense of the Cougars controlling the game down the stretch and winning by a final margin of 44-32.

“We really focus or preparation on stopping Franklin and Hessey. They are a couple of good players, and then when Miramontes scored a half-dozen points in the second, we had to adjust,” commented Cougar Coach Shaun Derda. “Holy Family has a good team, our kids responded at halftime and really did a great job of pressuring the ball and attacking the basket and I think those two things attributed to our win.”

“We played three good quarters and just ran out of gas,” remarked Holy Family Skipper Chris Fewell. “The offensive boards hurt us against Derda, but I thought that our team competed and I was very happy with the performance of Franklin,”

In other scores around the Inter-City Catholic League, Johnny Wang helped the Pumas of Queen of Peace defeat the Bulldogs of Our Lady of Hungary, 29-22.