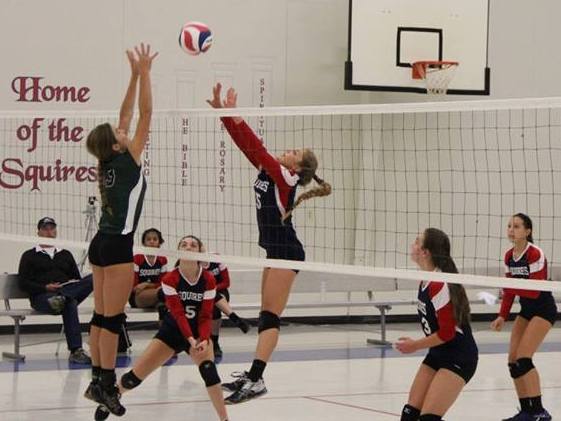 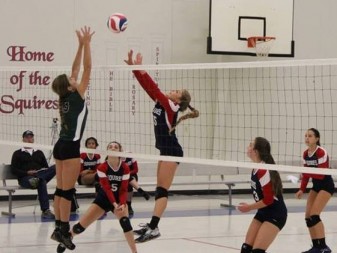 FORT WAYNE — In front of a packed house, the St. Joseph-Hessen Cassel Squires and the St. Rose/St. Louis Twins squared off for the Blue League season title on Sunday, Oct. 4 at St. Joseph-Hessen Cassel. Both entering the contest undefeated in league play, the matchup did not disappoint with the two well-matched teams battling it out to a third game.

On the gridiron, Coach Sam Talarico reported that St. Charles moved to 5-0 on the year with a 32-0 victory over a tough Central Catholic squad. The Cardinal defense was again stifling and allowed no first downs. Led by their front of Braeden Groves, Nolan Hoffman, Johnathan Knepper, Lucas Krohn and Sam “Ando” Andonian, the St. Charles defense played with energy all day. Sam Cornewell and Blayne Huston intercepted passes and Groves had a scoop-six touchdown to help with the defense as well. On offense, the Cardinals had two touchdowns from receiver Jaden Parnin as well as rushing touchdowns from Hayden Ellinger and Krohn. The touchdown passes were thrown by Patrick O’Keefe and seventh- grader Brenden Lytle.

The undefeated Cards will face a one-loss St. Vincent’s squad next week with the regular season CYO title on the line.

MISHAWAKA — With the backdrop of a blue-grey October sky the Inter-City Catholic League would crown its 2015 regular season champion as the two undefeateds matched up at Bob Otolski Field at Marian High School.

The Mishawaka Catholic Saints hadn’t given up a point since Labor Day weekend and the Panthers of St. Anthony were the only team to eclipse the 100-point barrier on their way towards the historic contest.

The Saints would get the ball first and their game plan was easy — give the ball to talented backs Charlie Maxwell, Michael Schaffer and Thadeous Horvath, drive the ball behind a big line and win the point of attach.

The game plan was true, however, when quarterback Josh Gill would drop back to pass the smothering defense of the Panthers and the play of lock-down cornerback Connor Farrell dominated leaving the first possession of the Saints stuck in a quagmire of maroon and gold.

The Panthers had more skill players involved in their diverse offense and used all of them — running backs Tyler Deboe, Michell Floran, Kenzel Kelly and Paxon Campbell, along with a very talented quarterback in Luke Leonard — on their opening series.

St. Anthony’s had a huge 11-play drive that was stopped by a series of self-inflicted penalties and then a big hit by Saint defender Aaron Fuller that forced a punting situation.

The Saints again had a blueprint that saw their running backs flourish, but a passing attach that served up a sack, incomplete pass and finally an interception by Panther Colby Szymczak ending the drive and essentially the half.

The Saint play of attack after the intermission would be a simple one — place the ball in the belly of Horvath, block and watch him do the rest as the big back carried defenders down the field during the 58-yard march. Miguel Ortiz’ leg couldn’t be any more important as the golden limb lifted the points extra try through the uprights giving his squad an 8-0 lead.

The Panthers would not roll over as they let DeBoe and Floran do most of the heavy lifting and on the 14th play of their second half drive a counter to Floran put a stamp on the score.

The dependable leg of Panther Campbell, who was 12 for 13 during the four contests, hit the ball solid but the attempt floated just to the left of the goal post making the score, 8-6.

The opponent for the Panthers would now be Horvath and the clock and with the combination of keying on the back, timeouts and a big hit by lineman Michael Conery the Saints would give the ball back to the potent offense with 45 yards to go and 1:35 ticks left on the clock.

The Panther’s fate was sealed when ironically Saint quarterback Josh Gill, while playing defensive back, intercepted a final Leonard toss completing the undefeated regular season for the purple and gold armored gladiators.

“What a game,” exclaimed Saints’ skipper Tony Violi. “The Panthers were coached well and played great and we were fortunate to come away with a win.”

“I can’t begin to tell you how happy I am with this team,” added Violi. “Our offensive line made holes for Horvath, and Fuller came up big on both sides of the ball.”

“I really just want to congratulate Coach Violi and his team. They played like we expected and deserve the win,” remarked Coach James DeBoe. “I was proud of the way our kids battled, we will work on getting out of the blocks quicker and limiting our mistakes.”

In other action around the ICCL, Holy Cross outscored the Cardinals of West Side Catholic, 22-8, behind the leg of Miguel Zyniewicz and the rushing touchdowns from Patrick Driscoll, Asante Anglin and Evan Price. John Underly scored the lone TD for the Cardinals and Pedro Uriostegui booted the extra points.

The Blazers of St. Matthew blanked Osceola Grace, 40-0, with the help of four scores from Isau Gonzalez and two more added by Christian Tate.

The playoffs begin next week, as the Blazers will match up against their rival, the West Side Cardinals.