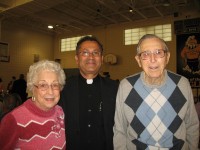 Recalling the words of Venerable Pope John Paul II that “the family is the church in miniature,” Father Cyril Fernandes, center, pastor of St. John the Baptist Parish, Fort Wayne, celebrated a Mass for Married Couples on Sunday, Nov. 6. Eighty couples participated in the deeply enriching experience and enjoyed a sit down meal following the Mass.  Acknowledged were the longest and newest married couples. Ken and Millie Wagner, above, will celebrate their 70th anniversary next spring. They were married on April 14, 1942, at St. Mary Church, Fort Wayne, when Ken was home on leave from the Army. Scott and Tiffany Brown will celebrate their first anniversary on Nov. 27. They were married at St. John the Baptist, Fort Wayne, by Father Larry Kramer. 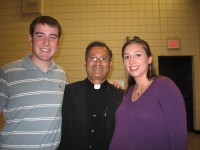