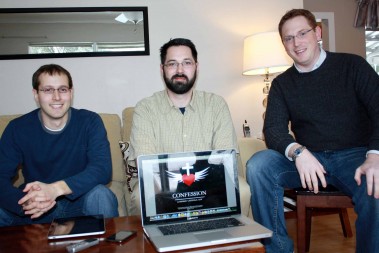 Ryan Kreager, Chip Leinen and Patrick Leinen say they’re recently developed Confession app is designed to help people with their examination of conscience, and also to help people return to the Sacrament of Reconciliation. “It’s very exciting for us,” says Ryan, “especially in light of the Holy Father’s exhortation to redeem the Internet and use new media and social media for evangelizing.  This just seemed like a perfect fit.”

SOUTH BEND — Can modern technology help strengthen our faith? According to Pope Benedict XVI and some techno-savvy Catholics from South Bend, the right application can.

In his recently released papal document, “Truth, Proclamation and Authenticity of Life in the Digital Age,” Pope Benedict XVI says it’s not enough to just “proclaim the Gospel through the new media,” but one must also “witness consistently.”

Developers of Confession: A Roman Catholic App for Apple’s iPhone, iPad and iPod Touch think their product helps people do both.

As word of this new app spread primarily through the Internet, brothers Patrick and Chip Leinen and friend, Ryan Kreager, say feedback has been positive. The app, reportedly the only one with an Imprimatur, is designed to help prepare people to make a better confession.

(The Imprimatur, given by Bishop Kevin C. Rhoades in this case, is an official declaration by a Church authority that a book or other printed work may be published. It declares the published work contains nothing offensive to Catholic teaching on faith and morals.)

“The app is really built for two kinds of people,” explains Ryan. “For Catholics who go to confession regularly, it gives the user information. They enter their name, age, their sex, their vocation and their last confession date, and it generates an examination of conscience based on that information.”

Centered on the Ten Commandments, the examination would be different for a young mother than for a teenage boy. The examinations were provided by two different priests explain the developers, who say that’s what allowed them to receive the Imprimatur.

In addition to helping Catholics who already make use of the Sacrament of Reconciliation, Ryan explains how the Confession app is helping another group of people.
“It’s also for people who’ve been away from the Church and want the opportunity to go to Confession,” he says. “You go to the examination of conscience and it literally walks you through, step by step, your confessions as you’re in the confessional.”

Patrick recalls one instance during testing. A man who hadn’t been to confession in 20 years used the app and made his way back to the Sacrament.

“Just the fact that someone had used the app like that, even before it was released to Apple … that’s the coolest thing in the world!”

Serving as a kind of digital notebook designed to help people remember the various prayers as well as document the sins they want to confess, the Confession app provides several versions of the Act of Contrition, including one in Latin.

Melanie is a 17-year-old junior at Marian High School in Mishawaka who says going to confession is an important part of her life. A fan of technology, Melanie appreciates the customized examination of conscience.

“It makes me evaluate my personal situation in life,” she says, noting how easy it is for her to understand and remember the sins she wants to confess. “My favorite part is definitely the inspirational quote that pops up after you have gone to confession. Each time I feel like it really tells me what I really need to hear at that moment. It is a great motivational tool after a good confession!”

Pete, an 18 year old senior at Saint Joseph’s High School in South Bend says he’s likely to use the app next time he goes to confession.

“It’s nice that it has a list feature,” adds Pete. “It makes it really easy to recall things when I’m in the confessional.”

“Once you go to confession, all that information is wiped out,” says Ryan. “All it’s going to remember is personal data like your name, age and date of last confession.”

For more information on downloading the Confession app, go to www.littleiapps.com. Littleiapps is the company created by the Confession app developers. (Little “i” as in “I must decrease and He must increase,” explains Chip.) They say they hope to create more Catholic apps in the future.

“I think it has the potential to bring many teens back to the faith and confession,” adds Melanie, who says she knows kids who haven’t been to confession in years for various reasons. “I think this app will be a wonderful helper for teens to encourage them to go to confession. They won’t have the excuse that they don’t know how to go to confession anymore!”