With identical GPAs of 4.7133, Rose Kavanaugh and Grace Weaver are sharing the title of valedictorian at Marian High School this year.

That’s not all the girls have in common. They’re best friends and both are following in their parents’ footsteps with plans to become doctors at their respective colleges. 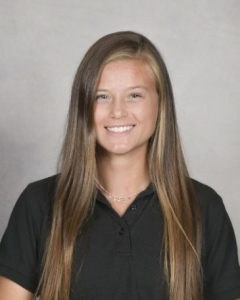 Grace Weaver is the daughter of Doctors LeRoy and Lorraine Weaver. She and her parents and younger siblings, Abigail and Joshua, live in Wakarusa. The family attends Granger Community Church.

During her years at Marian, Grace played soccer, becoming captain in her senior year. She was also in Research all four years, an opportunity for students to work cooperatively with college professors investigating real world problems through scientific study, Service Leadership Counsel and the National Honor Society — this year as co-vice president.

Outside of school, Grace is part of an Elkhart County Soccer club and coached girls soccer. Other volunteer work includes helping at a food bank, at basketball games and at her church.

After graduation, she plans to go to Calvin University in Grand Rapids, Michigan, and will major in Biology “on the pre-med track.”

Grace shared that because both her parents are doctors — her mom an OB/GYN and her dad a radiologist — growing up in that environment sparked her interest in pursuing medicine as a career. She always loved science, especially Biology, and that interest peaked in middle school and high school. At Calvin University, she may pursue either surgery, radiology or biomedical research. “I’m looking forward to the research opportunities with them,” she said.

Faith has always been an important part of her life, and exposure to Catholicism has broadened her view of religion.

“Throughout my life, it’s always been very central to how I grew up. We’re Protestant and attended church regularly,” she said. Grace attended Trinity Lutheran Elementary School and then St. Pius X School in Granger before coming to Marian.

She said her Christian faith has “really provided me with a backbone to rely on and has been a constant in my life.”

Receiving a Catholic education provided her with a consistent structure of faith. “As faith was integrated into everything, and as a Christian, I felt supported in that,” she said.

She admitted there have been times in her life when maybe her faith wasn’t as central as it is now.

“Staying in Christian education has helped with that and it gave me a good foundation. It’s been a good support and helped me to hold onto my faith,” Grace said.

Continuing her education in a Christian setting influenced her decision to go to Calvin University.

Her favorite memory at Marian is coming in second at the state championship in soccer this year. Grace said the connections she made through Research and her friendships are things she’ll take with her moving forward, as well as the study skills she was taught.

“I’ll be back for football games,” she added.

Her friendship with Rose goes back to sixth-grade at St. Pius X, and though they weren’t very close in middle school, their friendship grew gradually through high school. 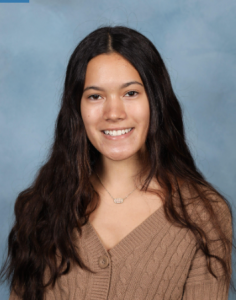 Rose Kavanaugh is the daughter of Dr. Phil Kavanaugh and Dr. Sandra Cho. She has an older brother, Anthony, who is a junior at Vanderbilt University studying pre-med. She lives in Granger with her parents, parishioners at St. Pius X.

At Marian, Rose was class secretary in student council and a member and co-president of the National Honor Society. She was involved in the Science Olympiad, which made it to state. She was also involved in Research, Spirit Knight and varsity track for three years.

Outside of school, she is first flute in the South Bend Youth Symphony Orchestra. She enjoys music and reading and sailing at her parent’s lake house.

Her volunteer work includes work at the homeless shelter with the St. Pius X Youth Group,  Pet Refuge and at a local hospital in guest services.

Rose received a scholarship to Notre Dame and plans to study pre-med.

Of her major, Rose shared, “I usually shy away from what my older brother and my parents do, so I didn’t want to be a doctor for a while, but when I got to high school, I really liked science and Biology and Research, plus I really liked volunteering at the hospital all those years. I like interacting with the patients and helping people so I thought, ‘I’d like to spend the rest of my life doing that — helping people.’”

Her mom is a podiatrist and her dad is an ER doctor, both of which she adamantly said she does not want to do. General surgery may be the route she’ll take as she likes the flexibility to do innovative research.

Her Catholic education gave her a greater sense of “Not just what but why — like I have a higher purpose.”

“I’ve always grown up around church and Catholicism. My faith has given me something to fall back on in those times when you’re not doing so well,” she said. “I’m glad I have it.”

Rose said her friendship with Grace was special. “We both have really interesting cultural backgrounds — Grace has Amish background and I have Korean (on her mother’s side).”

Sharing this valedictorian role with her best friend is “special. … we’re on the same wavelength. It’s the capstone of our whole journey.”

Rose pointed out that they do have some differences. “She likes sports and I don’t. I’m into music. She understands football and I have no idea what’s going on. She’s going to have to come back to go to Notre Dame Football games with me so she can explain it to me!”

Some of her favorite Marian memories were volunteer days. “It’s fun helping people who need help,” she said.

Rose will take her friendships with her as well as all the knowledge she’s gained.